In the past 11 years, under the direction of founders Bo and Lynne Cottrell, the Colorado Celebrity Classic has netted more than $3.5 million for TAPS. This year's contribution to TAPS is over $300,000. Proceeds from the Colorado Celebrity Classic events help sponsor vital TAPS programs, events and healing support for families like that of Sgt. Nick Pansini. Nick served five tours as a Marine, two in Iraq. When his sisters, Angel and Shannon, and dad, Joe, told the story of Nick's 2010 suicide at our banquet, the reason for supporting TAPS became clear: We care! 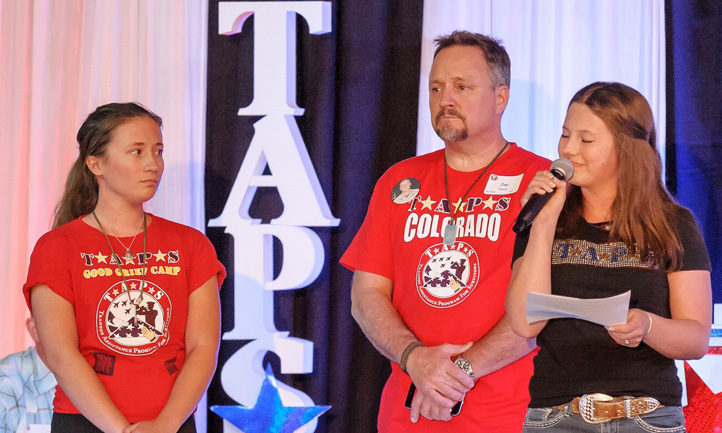 These generous contributions are made possible by numerous individuals and companies. More than sixty volunteers cover duties that include organizing and running the silent auction, tracking registrations and donations, escorting celebrities, recording photos and videos, manning the bars, working the golf tournament, stocking the gift bags, decorating the stage and tables, valet parking, and setting and cleaning up for the events.

The CCC includes the Songwriters Show featuring award-winning songwriters from Nashville; the Saluting Our Fallen Heroes Dinner Concert with a live and silent auction and entertainment by Tony David & Wildefire and songstress Suzy Bogguss, plus a celebrity golf tournament played at the Eisenhower Golf Club at the USAF Academy.

Lynn & Tony Krekener and Burt & Andria Lewis were the lucky bidders of house concerts with Nashville songwriters.  Special thanks to directors Lynne & Bo Cottrell, 60+ volunteers, and our generous donors!