To a newer TAPS staff member, the National Military Survivor Seminar can be intimidating. It’s a complex, fast-paced, weeklong family reunion, and I just joined the family. Beholding this mammoth of an undertaking for the first time was daunting. But I was inspired by Brandi Burke, a first-time TAPS volunteer who quite literally rolled up the sleeves of her American flag-inspired shirt on day one and went above and beyond for our families. 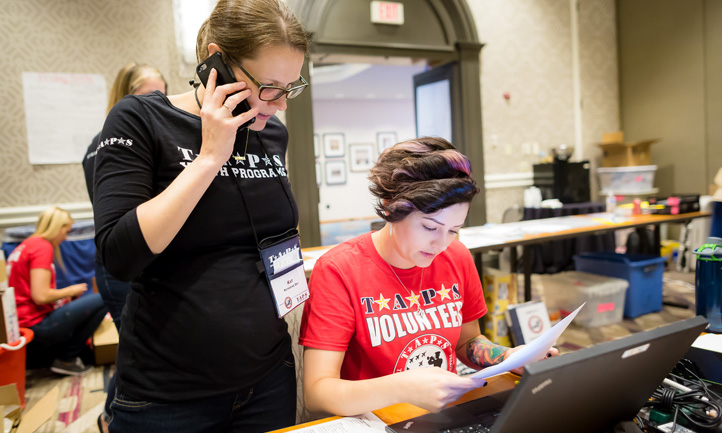 Brandi showed up early, stayed late, and handled everything sent her way. But what struck me most about Brandi was not the work that she did but her attitude throughout the weekend. Brandi emanated an unfailing graciousness and reverence for TAPS families that was contagious for volunteers and staff alike. Her service over a few short days resonated with me because it was driven by the desire to give back to her community in any way she could.

Brandi became the Swiss Army knife of volunteering over the course of the weekend. She started with folding and organizing hundreds of shirts for the Good Grief Camp children and mentors. She helped post signage, and she assisted with opening ceremonies and handing out fliers. Finally, after directing families to their events, she helped with a variety of administrative needs. Throughout all of these constantly changing assignments, she was responsive, flexible and accountable.

This support goes beyond the tasks she completed. Even after a few short hours of working with her, staff knew that they could lean on her. Her reliability provided much-needed peace of mind to the staff she helped. By taking on these responsibilities and being accessible and accountable, she eased potential stress and allowed staff to provide the comfort and care that TAPS families travel to the Seminar to receive.

Beyond the tasks completed and support provided to staff, Brandi contributed a positive attitude that benefitted all around her. In a notable moment in her time manning the Help Desk, Brandi and staff were able to comfort a surviving mother checking her family into their first TAPS Seminar. Brandi reflected that this was one of the most significant aspects of her volunteer work with TAPS; she was doing exactly what she came out to accomplish, caring for families who have sacrificed for our country. She said she "could not think of a better way to spend Memorial Day weekend."

Brandi's unrelenting positivity and reverence for our families was inspiring to see and culminated in a conversation I had with her on her last day at the event. We had just loaded cases of water onto buses taking families to Arlington National Cemetery. It was uncomfortably hot and we were tired from heavy lifting, but as we watched the buses pull away, Brandi thanked me. It struck me as odd, considering she was giving her time to TAPS. Then she told me that she hopes she never needs the services TAPS provides but is comforted to know there is a place she could go for care and comfort if she does. She told me she wants to be a part of supporting those who do need TAPS. She said, "As a military spouse, I felt a need to honor my husband's service, and volunteering is the best way I know how to give back."

Any gratitude that TAPS expressed for her dedication and flexibility was returned tenfold when she saw the Good Grief Camp mentors laughing and playing with children of fallen heroes. All the praise we could give her pales in comparison to being able to comfort a mother new to the Seminar. Brandi was the embodiment of a TAPS volunteer, dedicating selfless service to our survivors throughout the National Seminar.

Visit our volunteer page for more information on how you too can get involved with TAPS.