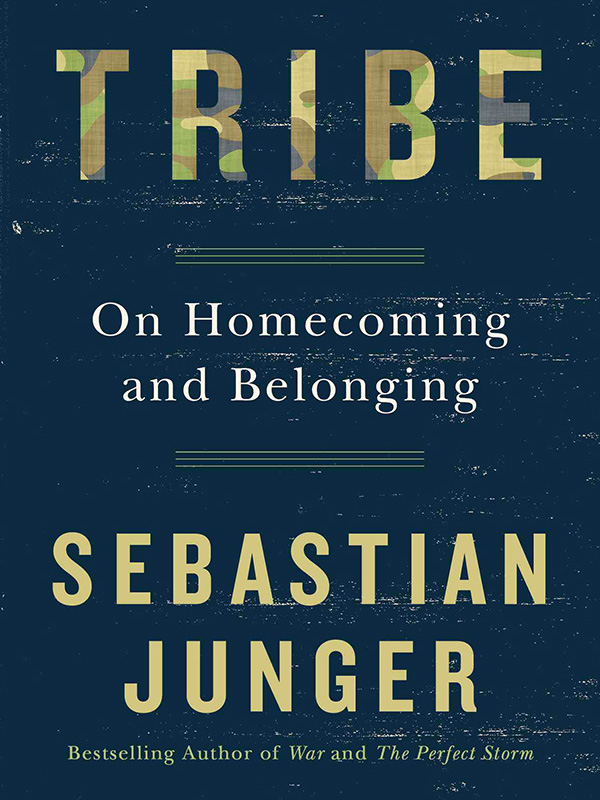 War correspondent and documentarian Sebastian Junger’s latest book deals with the failure of American society to reintegrate American soldiers returning home from combat. Junger is most known for his book “The Perfect Storm: A True Story of Men Against the Sea” and his film documentary “Restrepo.” Given his deep connection with soldiers and experience as a war correspondent, Junger’s perspective is based on raw emotion and personal understanding. Taken a step further, many of his findings parallel the sense of isolation survivors encounter after losing a military hero and their deeply abiding need to belong again, a solution often found within their TAPS family.

Junger uses history and scientific research to argue that a lack of communal relationship marginalizes America's returning combat veterans, which contributes to mental health issues. From a historical perspective, he juxtaposes American Indian tribal society against modern American society. Tribal communities faced existential challenges ranging from starvation to murderous attacks from other tribes. In order to survive, each member had to do their part. Because of their loyalty to the group, freeloading, treason, and cowardice were rare occurrences; but when they did occur, the tribe acted decisively.

In modern society, such cooperation for survival is not necessary. There is no need to work together in agricultural or hunting endeavors to survive. The result is a comfortable but isolated way of life. According to Junger, "Whatever the technological advances of modern society - and they're nearly miraculous - the individualized lifestyles that those technologies spawn seem to be deeply brutalizing to the human spirit." This is no more obvious than with a family struggling to find meaning after losing a loved one in military service.

However, modern warfare forces a commitment to community that increases happiness. Whether it was in World War II during the German Blitz of England or the bitter Bosnian civil war in the early 1990s, participants often look back at the epoch as the "happiest of times" - a time when the singular devotion to group survival transcended personal concerns. Junger argues this phenomenon occurs when "self-interest is subsumed into group interest because there is no survival outside group survival, and that creates a social bond that many people sorely miss."

True, the Americans venerate soldiers with shopping discounts and platitudes such as, "Thank you for your service," but Junger argues this type of comment "only deepens the chasm between the military and the civilian populations by highlighting the fact that some people serve their country but the vast majority don't." When American soldiers return, they find it difficult to secure work and are often treated as victims. Thus, post-traumatic stress and suicide rates are on the increase among these groups. When military families face loss, they often must move away from the communities where they live and find a new home. If America is to effectively deal with these issues of isolation, it must rediscover its sense of community.

Yet, we know our survivors and returning combat veterans face the darkest of days most successfully when supported by a strong, caring community. They are clearly fighting for survival in a world that has forever changed for them. There should be no separation between those who sacrificed and the love we hold for them. Welcoming them into a supportive environment is critical to their eventual healing.

When those who volunteered to fight for our nation come home and when families courageously grieve heroes who will never return, they deserve seamless integration into a tribe, a family, where they immediately feel belonging and purpose. I ask who is there for families of America's fallen heroes? For military survivors, TAPS is that tribe.

Junger's book is challenging and helpful in understanding the complexities of post-combat reintegration. It reminds the reader that communities such as TAPS are essential to trauma recovery and healing after grief. At only 135 pages, the reading is definitely worth the small investment of time to better understand an issue where we can each make a difference by offering not only respect but a sense of belonging to the heroes in our midst.