May 2015 was looking up. Life was taking shape after a long period of turmoil. I had a new apartment and vehicle. I made it through the first year of co-parenting after divorce. Set to start work again as a contractor, I also prepared to start a leadership role in my church’s young adult ministry. To top it all off, I was building a deeper relationship with my two sons, Jaxon (4) and Tray (19). May was good. 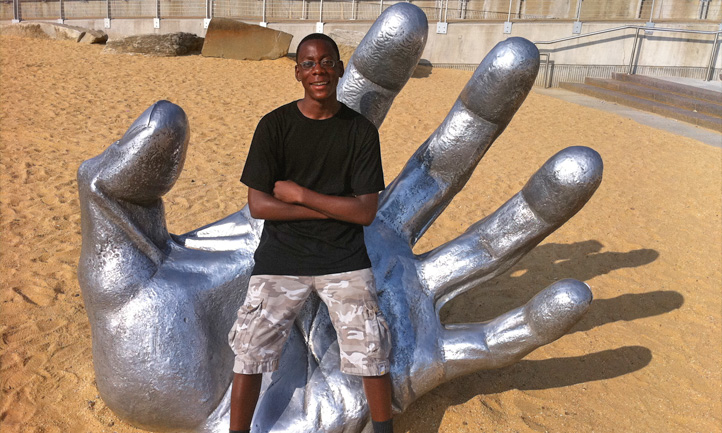 Then 12 days into June, as I prepared to send Tray happy birthday wishes, things shifted. It had only been a couple of days since Tray and I were in a long-distance Facebook messenger debate over who would win the 2015 NBA Finals. He was stationed at Camp Beuhring, Kuwait, and not seeing him more often was a remaining hardship.

I picked up Jaxon from daycare and we made our way home after a long day. As we walked into the apartment, we passed two military officers sitting in a government vehicle. Jaxon waved.

Moments later, I heard a knock at the door. I saw the two officers through the peephole. I figured they were recruiting and had the wrong apartment. I opened the door, and they asked if I was Christopher Daniel. I nodded my head yes. They asked if I had a son, Pfc. Monterrious "Tray" Daniel. Again, yes. At that moment, I still thought he might have been court martialed or gone AWOL. But then they asked if they could come in, and I knew.

After hearing the news that my son had been pronounced dead after he was found unresponsive, my body and mind went numb. I searched for words to say. They told me I was the first to know. They hadn't yet reached his mom.

Caring for Jaxon at that very moment allowed me to mask my initial pain. I cried  a little, but knew I had to keep it together for him. They asked if there was anyone they could call to sit with me. I told them that I would be all right.

I tried to call Tray's mom, but didn't get a response. I felt the weight of telling both Tray's mom and my mother. Like a typical guy, I wanted to make sure they didn't have a nervous breakdown over the phone.

I sat in a daze, wondering, "How did this happen when we were just messaging and everything seemed okay?" All I knew was that Kuwait was hot, according to Tray, but he seemed to be enjoying himself. He didn't tell me there was anything wrong. He was gone way too soon.

The next morning, I pulled myself together long enough to get Jaxon ready to go with his mom. Once she picked him up, I crumbled. I knew the phone was going to start ringing, so I tried to muster the strength to pull it together.

The phone did ring. And it rang and rang again. After talking to Tray's mother and crying for hours over the phone, I had to call my mom. That was horrific.

That entire morning seemed like an Ansel Adams photo - dark, grey and mysterious.

I had to leave my apartment because I felt like I was suffocating. I drove around for hours and ended up at the Washington Monument. I sat there for awhile listening to my iPod, but not hearing. My family called me, and I cried with them as I sat on the steps of the Jefferson Memorial.

I thought about what happened, how it happened, whose fault it was that my son was dead, and why I hadn't been more aware. Why hadn't anyone seen anything? Why him? Why now? How could this be? Why not me instead of him? He hadn't even lived yet! I questioned if he was depressed, or killed by a sniper, or ambushed by the enemy. I wondered if there was something I should have noticed but didn't.

The next few weeks were all a blur. Quite honestly, I don't know how I made it through. I don't know how I'm even able to write about it now. However, I do know that I couldn't have made it here without the help of TAPS.

Like many of you, I ignored the calls at first. I made sure everyone else in my family was okay first: my mom, my sisters, Tray's mom, Jaxon. But what about me? I neglected the self-care that I desperately needed. Only a month after Tray was buried, I found myself unshaven and unshowerd in my apartment staring at the ceiling. My refrigerator was empty. I had lost weight and missed dozens of calls from classmates and relatives. I was tapped out. Something had to change.

Then one day, on my way to lunch, I answered the phone without looking at the number. That's unusual, but interventions happen when we need them most. It was the Annapolis Vet Center. They invited me to come and chat. Nothing in-depth. Just come by and pick up some information to help me through the grief process. I already had a box of grief materials and books and my casualty officer provided the VA contact information. But I was honestly afraid to do anything because it would mean accepting the fact that my son was gone and I was hurting.

When the Vet Center called, I knew I needed help. I agreed to come in even though I was afraid, nervous and didn't really know what to expect. For the first time in 15 years, I was afraid to speak to another human being. I talk to people all over the world about what's holding them back, and for the first time I was going to have to be brutally honest with myself about what was holding me back: the guilt and shame associated with the death of my son. That was extremely difficult.

The first counseling session was tough. I cried and barely got through it. But she invited me back. I went again, a couple of weeks later. It was more difficult than the first session. My eyes hurt, but it felt better to talk it out and get those thoughts out of my head.

After a few more sessions, my counselor asked me a very poignant question, "What else do you need to keep progressing on this grief journey?"

"It would be comforting to hear how others are dealing with this. I can't be the only one," I said.

She asked me if it was okay to give my number to TAPS, and I agreed. Immediately after the appointment, I received a call from TAPS. They invited me to a Care Group in Arlington, and I showed up. Again nervous, not sure what to expect, I went. The last thing I wanted to do was sit in a meeting with a group of crying parents, but I needed to know how other people were managing. And that was the second best decision I've made along this grief journey!

I listened to others who were in the exact same position that I was. I met surviving parents, siblings and spouses. I learned that it was perfectly normal to be upset, even angry at times. I learned that it was natural to have days that are totally awesome and days that are the exact opposite. I learned how to throw old plates and glasses at brick walls for therapy on bad days and how to get through it by any means necessary.

My life has taken another turning point. I've been taking a healthy dose of self-care since September 2015, including monthly grief counseling appointments with my counselor and TAPS Care Group. That puts me in contact with help about twice a month. Am I there for every meeting? No. Do I make an effort to get help when I need it? Absolutely.

Guys are natural protectors. We want to ensure that everyone else is emotionally stable before we do the same for ourselves. That doesn't work well for us during the grief process. Men have to grieve for ourselves. Unfortunately, there's no playbook. There will be days when you don't understand why more people aren't making a bigger deal of your loss. There will be moments when you have conversations with family members and they may brush over the topic and not allow you the time and space to talk about it. There will be people who avoid you because they don't know what to say. And it's all okay.

I've learned that this is my grief journey. Mine. No one can understand the unique pain and anger I've felt or the shame and guilt I've overcome. Not even other grieving parents. However, for my son to be remembered as a hero, I must become a hero as well. I must accept the fact that he gave his life so I can be free. Now, I must live bigger and more purposeful than ever before. It does my heart good to meet other men and women at the TAPS meetings and share my story, only to see the relief in their eyes when they understand we "get it."

Sharing my story is difficult; however, if one dad, mom, sibling or significant other has a lighter heart, then it's all worth it. Know that letting yourself off the hook and giving yourself permission to heal is not a sign of weakness, but a symbol of strength. It's a badge of honor that you took the liberty to take care of yourself. Our loved ones died for our liberty, and if we don't embrace that freedom to take the necessary self-care steps, we cannot possibly take care of anyone else.