*Editor's note: TAPS plans to continue checking in with Jerry on his trek and will feature an update in a future edition of the magazine. You can find Jerry on Facebook (/jerry.d.bevel) or Instagram (@bigspoon421) to follow his journey of love.

Sunrise comes slowly to the mountain ranges that line the Pacific Crest Trail. Mount Whitney is the highest hurdle as the sun climbs 14,505 feet for her rays to crest the top. The golden beams usher in a new day for the intrepid hikers making their way from Mexico to Canada along the 2,650-mile Pacific Crest Trail (PCT). 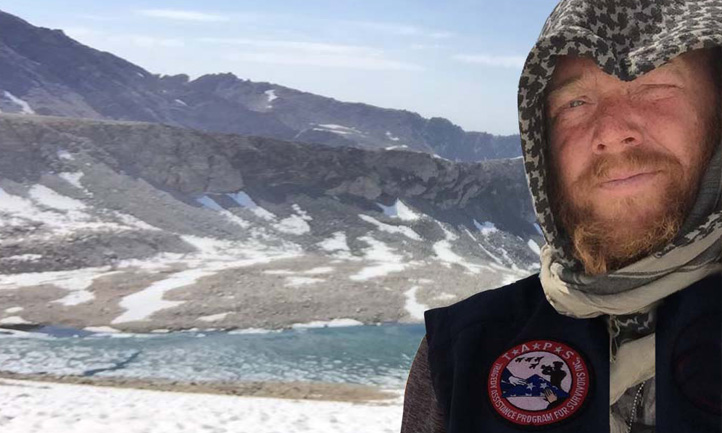 Jerry Bevel is one of those hikers. He set out on the multistate trail on April 21 and plans to finish the journey of love on Oct. 4, his brother's birthday. Ray won't physically be at the finish line to congratulate Jerry. Instead, Jerry will mark that day in solemn remembrance of Cpl. Ray M. Bevel who was killed in Iraq on April 21, 2007, when an IED exploded while he was on combat patrol operations with his 10th Mountain Division unit.

When Love is All That Remains

After losing a sibling, it is common to realize your identity was tied to shared experiences - summer vacations, church camp, homework, practicing ball in the backyard, chores. Then someone in uniform knocks on your door and life changes. Part of your identity is gone.

It takes time to discover who you are now that you can't continue making memories together. When love is all that remains, how do you purposefully incorporate your loved one into the rest of your life?

Working through your own grief is complicated by the tendency to rush into caring for your parents or other siblings. It's even possible to feel isolated in this new space if you are the sibling left to hold the family together during a great tragedy.

Perhaps you begin to take on the role of the brother or sister you lost. If they were the gregarious jokester, then maybe you start watching a bit more Saturday Night Live to hone your comedian skills.

Slowly, you begin to lose the thread of who you were before your brother or sister didn't come home from service. It is important to make the space to define who you are now and find a way to tie the legacy of their love to your future. For Jerry Bevel, the journey to define a new path and honor his brother takes shape against the majestic scenery of the PCT.

Ray lived larger than life and loved the outdoors. He liked to camp and go rafting as a kid. He always called home from his first deployment with a joke or a laugh. Ray worked with his hands and loved to build things. He was never afraid of failure. He would try anything - once - to challenge himself. Jerry's brother never complained about carrying around a fully weighted rucksack and getting shot at in Iraq. He just did it. That was Ray.

Jerry and Ray didn't spend a lot of time together outdoors, but a couple of years ago Jerry felt compelled to do something Ray would have done. When Jerry heard from a friend about a TAPS retreat for surviving siblings, he immediately knew he wanted to go on the whitewater rafting trip. Then last year, he summited Mount Kilimanjaro on the TAPS inaugural Expedition and found himself running down the mountain from the summit with other survivors.

On the way down, Jerry found it exhilarating to test his normal physical limits and realized his outlook on life had drastically changed since Ray died. Jerry recognized in that moment the imperative to "live a little bigger" for Ray. The constraints of his former identity gave way to the possibility of choices that weave parts of Ray into new memories.

When Jerry asked himself what action this required, he knew it had to be big. He calls himself a "solo" guy who doesn't have a wife and kids waiting at home. This gave him a lot of freedom to consider longer challenges to test what he really wants out of life. At first, he considered the Appalachian Trail (AT) but thought it was crazy to embark on a hike that would take months to finish. Still, the parallel of Ray rucking with his gear and Jerry hiking for miles with a backpack resonated in his heart. Then Jerry came across a YouTube video posted by John Amorosano, a veteran PCT hiker. The documentary about the man's trail experiences was inspiring, but 2,650 miles is no small feat and often takes the entire snow-free season to complete. It's even longer than the AT.

Jerry thought he might be going too big too soon, but then he watched the end of the video and realized John completed his trek on Ray's birthday. At that point, a lightbulb went off and Jerry just knew. Not only was it a sign, but if the stars aligned, Jerry could also finish on Ray's birthday.

No, it's not a coincidence that Jerry chose to start his trek on Ray's angelversary and plans to end on Ray's birthday. Only 35 hikers per day are allowed to start the PCT journey. When Ray applied for his permit, way past the recommended deadline, 75 percent of the April 21 slots were already taken. He knew Ray was watching out for him when the permit arrived in the mail marked "approved."

It wasn't easy in the beginning for Jerry to share Ray's story on the trail. It seemed awkward to just throw it out there. But as more people began to learn what inspired Jerry to start his journey, the more the story took on a life of its own. Jerry now wears his brother's photo button on his pack where everyone can see it. He also sports a special 10th Mountain Division T-shirt commemorating all the fallen of the Division, including Ray. When he comes into camp or meets up with a new group, they have often already heard why he is hiking the PCT. They ask him about Ray and give Jerry the opportunity to talk about his service, share the memories and honor the amazing person who inspired him to start this endeavor. Jerry hopes to spread Ray's story across the West Coast and promote awareness for TAPS and other fallen heroes and their families. He wants this journey to inspire others to "live a little bigger" for someone they love.

Jerry has now completed almost 800 miles of the PCT including 556 miles through the desolate desert of California. He's run out of water three times only to be rescued by others sharing their meager water rations. He's picked up numerous resupply boxes from family and friends who are supporting his trek. Fire closures caused him to lose a week he had to make up by hitchhiking.

At press time, Jerry is in the Sierra Nevadas and daily faces the hardest experience he has ever undertaken. Each step is an emotional journey of love as he considers the weight of his brother's life and influence. Heat rash and blisters only make him remember Ray's love of country. The 50 pounds Jerry carries in his pack seem a small thing compared to the magnitude of Ray's sacrifice. These thoughts are what motivate Jerry to put one foot in front of the other on the trail. With each step he discovers a new Jerry, one shaped by the legacy of his brother's memory.

By Bevin R. Landrum, MA: Bevin has a master’s degree in public relations, is an avid sports fan, cook and Southern hostess. She is a military spouse and the surviving daughter of a World War II veteran. Bevin writes to honor him and all those who serve.