Life Beyond the Seminar: Through the Lens of a Good Grief Camp Mentor

Daniel Davenport woke up one morning in April and sent a text message; a simple enough task, one that many of us do so often we think nothing of it. But for one TAPS family, this text message was so much more. Because on the anniversary of her father’s death, a child knew she was in the thoughts and prayers of her mentor. And that child’s mother knew her daughter had a role model, confidant, and friend — every day of the year. It is moments like these that motivate Daniel to give back as a Good Grief Camp mentor. 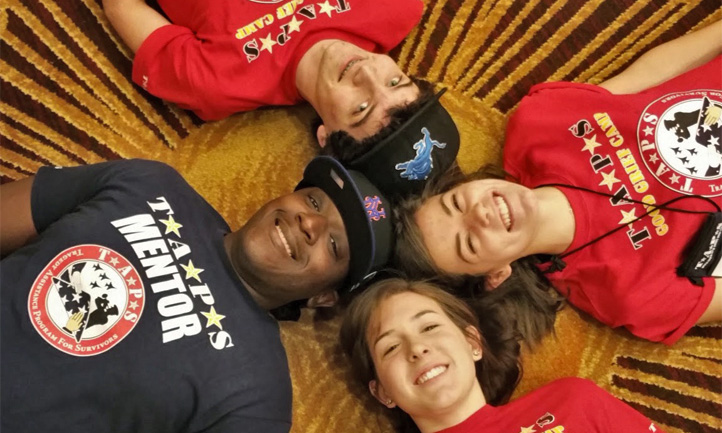 Daniel got involved with TAPS when he volunteered for the 2013 TAPS National Military Survivor Seminar. After returning from a 10-month deployment to Afghanistan in 2012, Daniel felt "a new appreciation for life and liberty" and decided to give back in the form of community service. He knew he wanted to serve the military community and was looking for an organization that could help him support a cause important to him. When he heard about the TAPS mission, he was excited to get started.

His first experience with TAPS was a bit nerve-wracking, especially because, as a mentor, he would be paired with a child for an entire weekend of emotional support and care. It was important to Daniel that he provide a meaningful experience for the grieving child so that they could both grow and support each other through the weekend. However, any doubts he had about his impact were diminished as soon as he connected with his first mentee. He knew he was making a difference when, after spending his first day fretting over whether he was even able to get by, he overheard his mentee tell a friend that, "TAPS got it right this year," when pairing her with Daniel.

After seeing the support mentors can and do give to surviving children he was hooked, and he has served at every TAPS National Seminar since. He makes a point at every Seminar to get to know his mentees.

He makes sure their voices are being heard and they feel comfortable opening up to him about their grief, or even just their everyday life.

Though the National Seminar brings them together only over Memorial Day weekend, Daniel feels a responsibility to stay in touch with his mentees year round. Regular contact with these kids is a way for him to make sure they are supported emotionally but also not getting into trouble. One teenage mentee goes so far as to introduce him to friends by saying, "Hey, this is Daniel, my mentor from TAPS. I call him before I do stupid things."

These lasting impressions have inspired Daniel to give back beyond Good Grief Camp. In the past year alone, he has helped TAPS sell Courage Caps, staffed expo booths for the Marine Corps Marathon and Army Ten-Miler, distributed packets at events, worked the Potomac Hunt Races and helped set up the TAPS Honor Guard Gala. In this way, he has provided countless hours of support to a variety of our different programs and events.

However, the best part of volunteering for Daniel will always be the kids: the joy, the atmosphere and the love in the room whenever they get together. He is able to celebrate their success with them, knowing he played an important part in their journey. "I feel a sense of purpose in their life…and I don't think there's any other joy."