After months of preparation, phone calls and staff meetings, staff and volunteers flew in from every corner of the country for the final push to make ready for the 22nd Annual National Good Grief Camp. In one day, we were operational and ready to welcome the almost 1000 children, mentors and volunteers showing up for the Good Grief Camp in Arlington, Virginia. 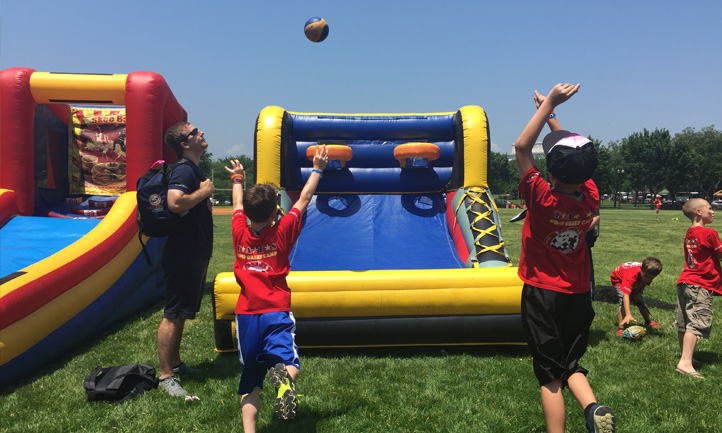 However, before the campers arrived, our mentors received a comprehensive training that covered the TAPS history and mission, grief and child development, their role as a mentor and specifics on keeping children safe.

Two of the mentors who came for training this year were Brenden Roos and Steph Collenette. Brenden and Steph were paired with 10-year-olds Landon Gilbert and Tyler West to mentor throughout the Good Grief Camp.

Brenden's journey started in 2015 when he opened an email from his chain of command encouraging him to mentor a child of a fallen hero at the upcoming TAPS National Military Survivor Seminar. As a Petty Officer 2nd Class with the Naval Information Operations Command, which participates in a command-sponsored volunteer program called Project Good Neighbor, he was one of 22 unit members inspired to volunteer as a mentor for TAPS.

Growing up as a Navy brat, Brenden's dad was away frequently on ship duty. "But my dad always came back home. TAPS kids don't get that happy ending. It made me realize it could have been me," he said about his motivation to help our youngest TAPS survivors.

While Brenden was a returning mentor, Steph was new. Her best friend from a prior assignment in Italy and her current supervisor recruited her to volunteer as a mentor. They both volunteered before as mentors and thought she would be a great fit. Steph is active duty at Joint Base Andrews in the 11th Security Forces Squadron and believes her experience as a first responder helped prepare her to understand her mentee's loss and grief.

In 2015, Brenden had been paired with Tyler, who lost his father, Army Staff Sgt. Matthew West, in Afghanistan on Aug. 30, 2010, when insurgents attacked his unit with an IED. Tyler attended his first Good Grief Camp in 2015, and he and Brenden immediately bonded. They spent a lot of time in a small group with a senior mentor and his two mentees, Landon Gilbert and Nathen Jones. The group created the space for trusted sharing and support for the boys to know they are not alone.

Brenden has kept in touch with all three boys via emails and phone calls. They even attended additional Good Grief Camps and Campouts together. So, it was no surprise that during registration this year, Tyler's mom requested he be matched again with Brenden.

Landon Gilbert, son of Navy Lt. William Craig Gilbert who died by suicide in 2012, also requested Brenden. The two kids know each other, and while Tyler wanted to be paired with Brenden, he knew that his friend Landon really wanted Brenden as his mentor. Tyler agreed to be matched with a new mentor. Steph immediately felt that coming into a previous close mentor/child relationship actually made it easier for her as a first-time mentor. Tyler was already more open and used to talking to his mentor, and this set the tone for their interaction during the Good Grief Camp.

Campers of all ages and mentors are busy from the moment the National Good Grief Camp starts. Everyone is given plenty of time to learn about each other, tell stories of loved ones and form bonds that will last throughout the weekend and beyond.

Saturday may be one of the busiest daysfor our “middles.” By midmorning, campers and mentors load on a bus to spend the afternoon in Potomac Park along the shore of the river.

This third annual event, Playfield in the Park, is a TAPS favorite made possible with the Yellow Ribbons United partnership to provide an afternoon field day of fun for TAPS kids. Yellow Ribbons United, founded by Emma and Derrick Dockery, brings teams, athletes and sports-minded organizations together to support military families.

The fun started with a run through a rainbow arch of balloons and high fives from major D.C. sports athletes. The weather was perfect, not too sunny and not too hot. For two hours, with the Lincoln Memorial and the Washington Monument in view, campers ate, danced and played as they strengthened friendships and found joy.

I caught up with the foursome as they grabbed food and some shade during lunch. Tyler told me that sometimes the playing is the best part. “When I used to talk about my dad, it made me sad,” Tyler said. “Mom said I was supposed to grieve, but I didn’t want to be sad. TAPS helped me learn how to remember my dad and how much I loved him. Everyone here is like me. They get it. Sometimes we just play because we understand you don’t always have to talk about it.”

And play they did. With their loved one shining down on them, hundreds of campers ate ice cream and pizza, played basketball and danced together. Watching them smile and laugh never gets old.

For some kids, this is the only week of the year when they feel normal about having lost a parent. Back home, most of the kids have both parents. Here, it’s no big deal to talk about your hero and how much you miss them. In fact, Landon shared how much he looks forward to Good Grief Camp. “Every time helps me with my grief, so we keep coming back,” he said.

After spending Sunday morning together, the mentors and campers say goodbye to each other in the afternoon. This part can be rough, but many mentors stay through Monday to go to Arlington with their mentee’s family or pay respects to their own fallen comrades. The children need this transition period to adjust to the world they live in the rest of the year. That world is now easier to navigate because of the security that comes from bonds of friendship with other campers and the continuing support they have with their mentors.

By Jonathan Kirkendall, MA LPC: The son of missionaries, Jonathan grew up in Beirut, Tehran and Bangalore. A graduate of Wake Forest University and Narapo University's Masters in Counseling Psychology, he has over 20 years experience in working with children, teens and adults, and, outside of TAPS, manages a small private practice in D.C.