Thanksgiving 2005 was a quiet family affair. Capt. Tom Hanrahan and his wife, Kim, stayed home in their quarters on Fort Polk to celebrate a simple Thanksgiving. Tom had just come out of Joint Readiness Training Center predeployment training the day before. They decided that with a toddler and a newborn, traveling to Texas just wasn’t going to happen that year. 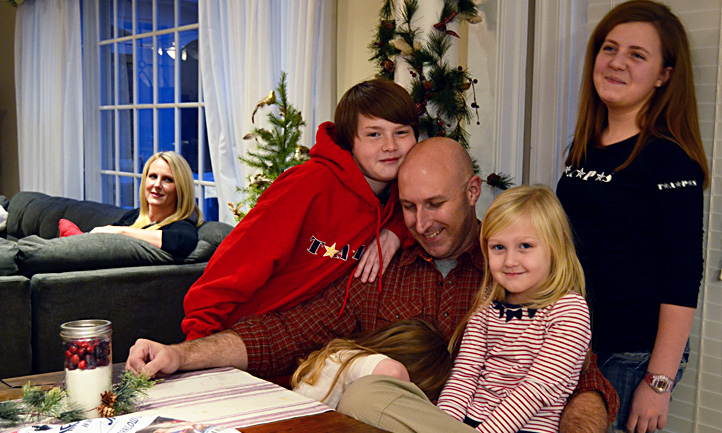 Instead, Tom's sister and her family joined them, along with their two dogs. Even with two dogs, two cats, four kids and four adults in their small post quarters, it turned out to be a wonderful time with family. Kim and her sister-in-law made the basic Thanksgiving staples. They tried to cut the recipes down from Texas-size so they weren't eating turkey tetrazzini for weeks. It was a scene celebrated by many young military families that year. Kim had no inkling that Tom would be gone in a matter of days.

On Nov. 30, 2005, Tom passed away from injuries sustained in a motorcycle accident on his way home from work. Doctors discovered he had an undiagnosed condition, which caused the accident. Nothing could have stopped it. Kim was 29, Grace was 2 and Sam was 9 months old.

Kim leaned on her closest friends in the early days after losing Tom. "My friends didn't just bring food, they came over and sang with me," she said. "We all had served on a worship team together and we sang happy songs and smiled. We sang sad, heavy songs and wept. They brought groceries, did my laundry and cleaned my house. I will never forget the selfless ways in which they put themselves near to me, physically and emotionally."

She also turned to her faith. Many at her home church in Temple, Texas, prayed for her. She knew their prayers were strong as she had participated in many church prayer lists for military members stationed around the world, including one Capt. Roland Keller during his deployment to Afghanistan in 2004. His brother-in-law was the pastor at Covenant Lutheran.

Days, weeks and months turned into the first year. All the while, Kim knew that Tom would want her to remarry and take that next step – for her own happiness and so Grace and Sam would have a dad in the house. Her first efforts at “putting herself out there” weren’t very successful.

The dating market for a stay-at-home mom surrounded by married friends is not that great. And Kim was resolved that if and when she found the right man – he would also be in the military.

Kim remembered that her pastor’s brother-in-law was in the Army. “I figured I could have at least one date in 2007,” she said, flashing back to the time she asked her pastor to pass along her number to Roland. They were email pen pals for five months before they ever met or had that first date. In fact, the date was a trip to the zoo with Grace and Sam when Roland was home on mid-tour leave with the 2nd Battalion, 27th Infantry Regiment Wolfhounds.

Focus on the Good Memories

Roland never felt that sense of having to tread lightly when it came to his budding relationship with Kim and the kids. Early on, Tom’s parents had encouraged Kim to move forward when the time was right. The kids were young and didn’t have the memories to compare Roland to their dad. However, Roland also never failed to include Tom in the conversation. Roland says he felt that it was important to not let Tom’s loss cast a shadow over their future, but instead he wanted Tom’s memory to always be a happy part of life.

Over time, Kim realized that you can’t be in love with someone who is gone, but you can hold their memory dear and cherish the love you had with them. Having been initially hurt by her in-laws’ encouragement to move on, she began to accept that they had given her a huge gift with their blessing.

She and Roland continued to date long distance through his redeployment in October 2007 and his assignments at Schofield Barracks, Redstone Arsenal and Joint-Base Lewis McChord. Kim and the kids lived near Fort Hood the entire time they dated. While long-distance relationships aren’t easy, this provided space for the couple to begin forming a relationship and for them to slowly integrate Roland into the kids’ lives.

Easing into his relationship with Sam and Grace came at a gradual pace while Roland and Kim dated. They included the kids in many parts of their courtship. Roland had to decide very early on that he was committed to the whole family, not just Kim. He never felt he was competing with Tom, only challenged to be the father figure Tom would have wanted for his kids.

Four years after Tom’s death, Roland proposed to Kim on Thanksgiving 2009. They married in March 2010, and Tom’s parents kept Sam and Grace while the newlyweds went on a honeymoon. This gesture from Deana and Richard set the tone for their close relationship to this day. Kim's and Roland's parents still live in Texas. Trips back to the Lone Star state include visits with three sets of grandparents because Roland’s parents don’t believe in stepfamily and have embraced Kim and the kids as their own.

Focus on the Positives

In the six years since their marriage, the Kellers have gone through further tribulations, including two miscarriages and cancer. But these stresses are always measured against the backdrop of the larger loss that Kim, Sam and Grace first faced. In a way, it makes them all more focused on the positives of life rather than the losses and trials they have faced.

Kim and Roland don’t enforce any specific traditions on Sam and Grace to honor their father. They tried a balloon release in 2010, but it ended in tears for the kids. Instead of focusing on things that might force Sam and Grace to relive the sadness, they like to focus on the memory of who Tom was. Kim asked friends and family to share remembrances of Tom for his 40th birthday in 2015. She says these are the memories she and Roland will recount to Sam and Grace over the years.

What’s In a Name?

Kim looks forward to her kids’ experience this year at Good Grief Camp. She thinks that at 13 and 11 they are just now entering the stage where they are old enough to process their grief and understand the possibility of what they lost. Roland doesn’t ever try to compete with the elusive “what might have been.” In fact, the only difference in their names (Daddy and Daddy Tom) is if they are being discussed in the same conversation. Otherwise, Sam and Grace’s relationship with Roland is an open acknowledgment of the presence of two fathers in their lives. One who was there to “see them born” and another to “see them grown.”

Kim and Roland’s family has expanded twice with the addition of Sarah in 2011 and Anna in 2012. The younger kids are not quite old enough to understand, but watching them all play around the table with Roland and a picture of Tom in the background reveals a blended family founded on love and legacy.

They have discovered that the best way to move forward and honor the memory of a fallen loved one is to remember them. Don’t hide away the memories in the shadow of loss. Celebrate the stories that cherish your hero’s life. Incorporate them into the highlights of your life.

Roland pretty much nailed it in 2014 at his promotion ceremony to lieutenant colonel. With Kim, Grace, Sam, Sarah and Anna gathered with other friends and family, he made remarks in the Hall of Heroes at the Pentagon. He thanked all the requisite people and then closed with this, “Every day when I get up and look in the mirror, I ask myself if I am living a life that honors Tom. It’s my job to make good on a debt of honor to Kim, Sam and Grace. I love my wife and all my kids, and I know he is watching over us.”

By Bevin Landrum, MA: Bevin has a master’s degree in public relations, is an avid sports fan, cook and Southern hostess. She is the surviving daughter of a World War II veteran and writes to honor him and all those who served.