My parents survived the Holocaust, so people who had been wrenched through horror and loss raised me. Mom spent ages 14 to 17 in a work camp, and came home to find her mother and two sisters were dead. Dad was imprisoned at Auschwitz and Dachau. Despite the pain poised just beneath the surface, my parents were role models for how to wrest joy and meaning from tragedy. 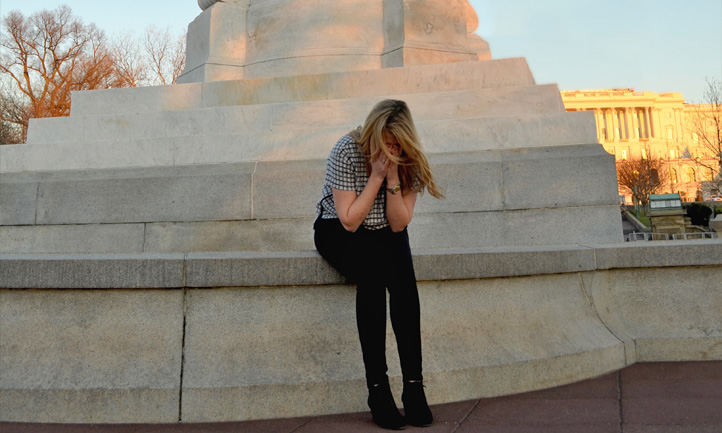 Now, as a therapist, when I see the fortitude of my patients in dealing with catastrophic events I am reminded of the self-discovery that takes place once a person accepts he or she can't undo a tragedy – but the person can relate to it in a new, healthier way.

Here are six positive things that can emerge from grief:

For a decade, the main role for one of my patients, Carrie, (all patients’ names are changed) was as caretaker to her dying husband.

Over the years, she'd given Tom her all – including a kidney. Despite this gift of love, the desperately ill man, who also endured cancer, congestive heart failure and multiple strokes, was eventually moved to a nursing home. Carrie sobbed in my office many times: "I know Tom wants to give up, but I can't let him go. If he dies, there is nothing left for me. I might as well be buried, too."

After his death, her grief was titanic. And yet, three weeks after the burial, she admitted, "I miss him with every breath I take, but there is also relief. When the phone rings, my heart doesn't leap to my throat. I don't need to worry something terrible happened. It already has."

Within six months, Carrie was experiencing a renaissance. Her life, which had been dependent solely on her husband's wavering physical state, suddenly took flight. She traveled abroad with her teenage daughter, joined a book club and started job-hunting. "Life is different than I imagined it would be on my wedding day," she told me. "Things obviously haven't turned out the way I wished, but there are new dreams I am pursuing.

2) Realizing your own resilience

One of the worst days of my life occurred over Labor Day weekend when I was 17. My uncle, also a Holocaust survivor, had been hit by a car and died on the operating table. Initially, I feared my mother would not recover.

For a solid year, she wore black and forswore any entertainment. Mom was changed. But her spirit proved resilient. After many terrible months, laughter returned to our house. She said to me once, "So many things have happened that could have ended me, that I thought would end me - but I'm too stubborn to let this take me down."

3) Your priorities change - for the better

Stacey's priorities shifted after her loss. She began therapy two weeks after her husband died of a brain embolism. Session after session, she kept repeating: "What were we waiting for? There were so many trips we wanted to take but kept telling ourselves even weekend getaways needed to wait until we felt more financially secure." Boxes of tissues were emptied as Stacey mourned lost chances: "Dan and I were so focused on working like demons for the future that we rarely sat on our porch to watch the sunset together."

After much inner work, Stacey has stopped beating herself up for what she views as mistakes. "There will always be regrets, but instead of drowning in them, I want to use the energy to push me forward."

This translates to a determination to never again devalue the importance of being in her life versus waiting for it to begin on some far-off day. Stacey is taking watercolor classes and makes sure to get out of the city once a month to enjoy nature. "Dan and I loved being outdoors, so whenever I'm taking a hike or savoring a sunset, I feel him with me."

If anyone had a right to stew in bitterness and fury, it was my father. Dad watched his parents and little sister march to the gas chambers at Auschwitz. Yet the man who raised me was the most gentle and forgiving person I've ever met. My father once noticed a confused elderly man wandering crowded streets, brought him home and then tracked down the man's grateful daughter. Whenever a friend of mine visited, if a parent wasn't picking her up, my dad drove the girl home. My father sold household goods and clothing, and if a customer couldn't immediately pay for the merchandise, Dad issued an IOU on the spot. He told me, "Being kind, no matter what other people are like, helps me feel good about myself."

Over a two-year period, I interviewed 66 Holocaust survivors in their homes as part of Steven Spielberg's USC Shoah Foundation: The Institute for Visual History and Education. The happiest survivors had been able to release – to some degree, at least – dark feelings toward their torturers. One interviewee told me, "It doesn't mean I forget or totally forgive. But, for my own well-being, I don't carry inside the injustice of what was done to me."

5) You can't outrun your grief

Within six months after the death of his wife, Lenny had taken a trip to Europe, run his first half marathon and accepted a demanding promotion at work.

He came to therapy after "totally losing it" during a meditation class at a corporate retreat. Lenny admitted, "It was the first time since Pam's heart attack that I was still for 10 minutes, other than sleeping, and everything inside me collapsed."

Lenny had literally crossed the ocean and worn out several pairs of running shoes to escape his grief, but he could not maintain that grueling pace forever. When he finally succumbed to a moment of reflection, the sorrow could no longer be denied. Lenny was convinced the grief, once unleashed, would be never-ending. But no emotion lasts forever - not the joy-ous ones you ache to hold onto, nor the darkness. Wait long enough, and the inner scenery will change.

Now that he's stopped running, Lenny finds his life is on an even keel. "It's such a relief to be able to feel sad when I need to and know that afterward I'll be able to meet a friend for dinner and have some genuine laughs."

Kara came to therapy after her estranged best friend died. She collapsed on my couch and wept, "I hadn't talked to Sue for nine months before she passed. Sometimes she was so self-absorbed. But I never mentioned it. My solution was to stop taking her calls."

Kara assumed one day she'd reunite with her friend. Then it became too late. Kara said, "Sue never told me she was diagnosed with cancer. Then her husband left a message with details for her funeral." Kara's grief was twofold. Not only had she lost someone she loved, but she'd lost valuable time the two could have shared.

What has given Kara solace is becoming deeply involved in the lives of Sue's children. "I take them shopping, they tell me their secrets and I give them advice. I won't abandon them."

It isn't possible to overcome or fix things after a loss. You won't revert to being the person you were before the tragedy. But that is not a bad thing. Knowing that everything is tenuous and the only thing over which you have control is your own reactions is a gift. It offers an opportunity to create a richer, meaningful life.

By Sherry Amatenstein, LCSW: Sherry Amatenstein is a staff therapist at Washington Square Institute and Long Island Consultation Center, runs relationship seminars around the country and works in person and on the phone with singles and couples.