On Nov. 24, 2015, I accepted the Presidential Medal of Freedom on behalf of my family.

I come from a family that understands that freedom is a privilege that must be protected, and that love is the deepest blessing. My family's legacy of courage and commitment to the greater good showed me that, while it is often difficult, service elevates us to extraordinary lives. We live these same family values every day at TAPS. 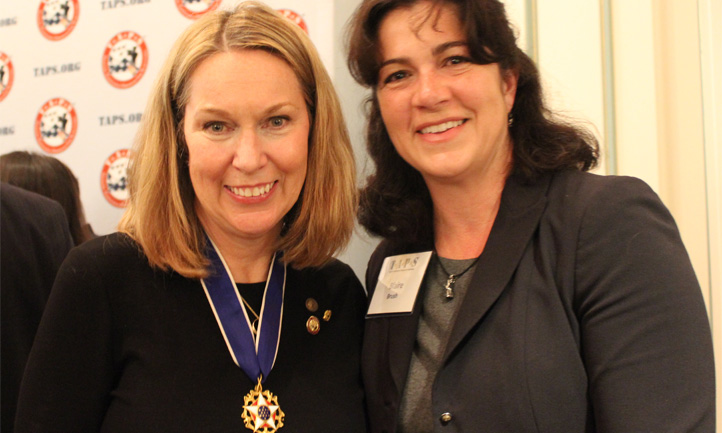 You understand because this is your family, too.

We all know that freedom is a national treasure, but it is also a TAPS family value of the highest order. If you've been to a TAPS event, you can feel it - the opportunity to unburden yourself, to be who you are, to take off the mask. As a part of our TAPS family, you have the freedom to share openly, to listen, to give and accept support. Our family not only understands, but also honors, the freedom to grieve, to remember and to rebuild. When your changed life overwhelms you, your TAPS family is there to walk beside you with love and care.

My late husband, Brig. Gen. Tom Carroll, and I met while trying to save a family. The commitment to figure out a way - any way - to rescue three grey whales trapped under the ice in Alaska led to several important joint operations. Most memorable, politically, was the joint military operation between the U.S. and Soviet Union, in the midst of the Cold War. Most important for our family, however, was the forging of a personal alliance, the love that grew between Tom and me.

During the whale rescue that brought us together, we had one goal: movement. Instead of remaining trapped and cut off from everything that could sustain them, the whales needed to move. We needed to help them break through the ice so that they could continue a journey to open water. In the end, freedom prevailed. They were saved by communication and connection. And as we helped save a whale family, we created our own.

Years later, after Tom was killed in a National Guard plane crash, I found that in order to continue to live out a love that wasn't finished, in order to save my family, I needed, again, to create one.

I needed to continue my journey. But to do so, I needed that same communication and connection.

Grief tries to make us smaller, to keep us from moving, to restrict our freedom to believe in what matters. In my darkest, most isolated moments, I needed people who believed that our love, and Tom's life, mattered. Just as we believed the whales were important, for reasons maybe even beyond what we knew at the time, I needed to feel seen, heard, understood. And so TAPS was born, from a visceral understanding that feeling trapped, alone and emotionally confined is not the end of the journey.

In addition to great love and a compelling sense of service, Tom and I shared the bond of having had to learn, too early, how to balance grief, love and pride. We both lost military parents as teenagers. My mother, who had been a pilot in the Women's Army Air Corps in WWII, died from a sudden illness when I was 17. Tom's father, the first Adjutant General of Alaska, was tragically killed in a National Guard C-123 crash in Alaska when Tom was just 15, leaving his mom to raise four boys alone. We both under-stood the risks of service, but we also accepted these and dedicated ourselves to the powerful call to live lives of purpose. In so doing, we embraced the same hopes we all do, that we can do right by those we love, and that we can make them proud.

And Tom and I knew what you all know, that with great risk comes great reward. It is an ever-present knowledge that the greater good means at least some measure of personal sacrifice. And so we pray, we hope, we turn the possibilities over and over and over in our minds, trying to prepare for how we will handle life's challenges, whether they are missed holidays or the last full measure.

But then the worst happens and we must live without those who sacrificed their freedom for ours. With each salute, our resolve is strengthened. With each snap of the flag in the wind, we feel the gift of freedom in our soul, and we embrace our part in preserving its legacy. We are the ones who see that shadow, but turn instead to the light of lives well lived and love dearly remembered.

As a TAPS family, we show people that when they think there are no more options, there is hope. Together, we encourage cooperation. We share the journeys and bear the burdens.  Together we remember lives magnificently lived rather than allowing a single moment at death to define our heroes.  They are more than their last breath.  They are beautiful, amazing, fantastic individuals who will live forever in the hearts of all those who love them. And so, they are truly immortal.

We are the ones who understand the relationship between freedom and family.

On Nov. 24, 2015, I accepted the Presidential Medal of Freedom on behalf of you, because you are my family, and because you, and the heroes you love, matter.