April marks the sixth annual Windy25 Memorial 5K and the 11th anniversary of the fateful Army helicopter crash in Afghanistan that forged the basis for lasting connection between TAPS and the Windy25 Memorial Fund organization. In our 2012 TAPS magazine feature piece about the group, we shared how survivor families from the crash found their way to TAPS and how the alumni of F Company, 159th Aviation Regiment, “Big Windy”, rallied around those surviving family members to provide caring love and support. Since that article, the scope of the Windy25 Memorial Fund and the depth of relationship between them, TAPS, and all Gold Star Families have grown and continue on a trajectory of hope and healing. 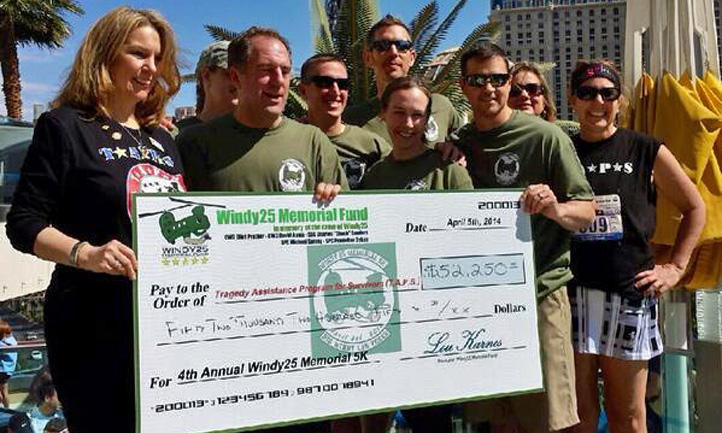 When we caught up with Craig Wilhelm, co-founder and president of the Windy25 Memorial Fund, he shared his vision for the future. The organization has a continued dedication to not only the families affected by the 2005 crash, but also those affected by the loss of anyone in service to our country. Wilhelm said, "We hope to continue illuminating the important TAPS mission to provide life changing care and resources to our nation's military families and honor the legacy of those we lost in Afghanistan."

This group of dedicated current and former military understands that when we call our fallen heroes by name and honor their memories they are with us. Telling their stories carries on their life legacy. The anecdotes and recollections are a beacon drawing other families affected by the April 2005 crash to come forward and connect with Windy25. Indeed, as the courageous and inspiring narratives continue to be shared and celebrated over the years they have far reaching effects.

Not everyone who perished in the crash was a member of the immediate unit roster. Some were passengers. In the aftermath of the accident, their family's contact information was not made available to the Windy25 leadership. Yet, through efforts to honor those affected by the crash, some of those families still found their way to TAPS. Still others connected to the Windy25 alumni group through our first article and the group's efforts. Wilhelm and his team hopes that through the help of the TAPS network and through our vigilance and quest to honor our heroes that the day will come where all 18 of the Windy25 families will have the opportunity to meet and share their stories together and with the support of this special group.

Wilhelm says what's special about the growing group participants is the incredible "family" that's been formed. The race brings together 50-80 of the unit's soldiers and families in union to "encourage remembrance and honor by challenging survivors, loved ones, colleagues, friends, and strangers to participate in events that provide an atmosphere to rally around families who have endured so much and give them the platform to share their heroes' life stories." Participation in the new "life challenge" component is designed so "participation leads to community by creating friendships, bonds and hope while inspiring Gold Star Families to join and connect," concluded Wilhelm.

What members of the unit have learned over the years is that partnering with similarly dedicated organizations is a two-way mission awareness booster that completes the circle between the TAPS Family and Windy25 survivors. Connection to a larger survivor community is a perfect example of the unit alumni's commitment to honor their families through raising funds, awareness and inspiration for our nation's Gold Star Families. The all-volunteer Windy25 Memorial Fund started as an idea in a living room. Through passion and focus it has raised over $250,000 for TAPS in just five years through the dedicated efforts of its supporters. Their sustained efforts now include running and swimming events, as well as other partner engagements that support TAPS and other, like-causes. Wilhelm and his team say, "a great moment this year was seeing TAPS embrace survivors at the ground level of their grieving process. We are steadfast in our commitment to our hero's personal stories and to provide life opportunities for their loved ones. In our drive to carry on our hero's legacy.

The next opportunity to participate with them is coming in the spring at the annual Windy25 Memorial 5K race in Las Vegas. It is a natural forum to engage survivors, runners, family and friends to pick up the torch and bring them together in support for one common purpose. Windy25's continued partnership with TAPS enables a strong base for organizing the fundraising component of the race and invites runners of all levels to participate in the powerful event to raise awareness and money for TAPS.