The teams4taps program celebrated its two-year anniversary in November. The occasion set in motion an exciting end-of-year schedule of team engagements. Across America, survivors and their heroes were honored both on and off the playing field. And the momentum continues - in 2016, teams4taps is poised to expand relationships with professional sports teams. With each interaction, more dreams come true for TAPS families, and teams and their fans gain a deeper understanding of what it means to care for the families of fallen heroes. 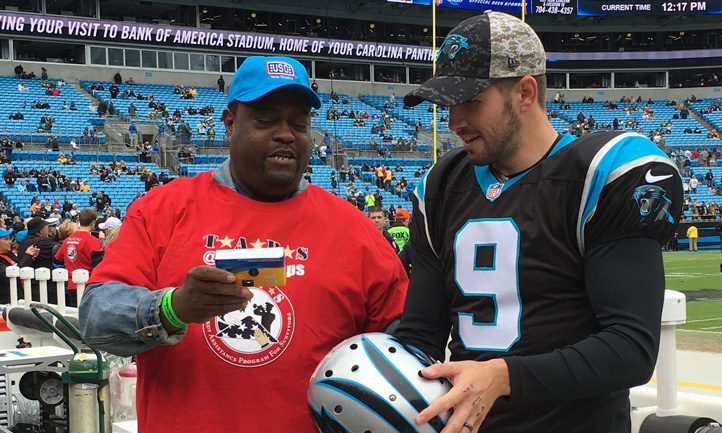 What started as an idea on a sleepless night on a base in Kabul is entering its third year of creating meaningful opportunities for TAPS families. A trip to Afghanistan focused on peer support and its advantages led teams4taps director Diana Hosford to consider the potential for TAPS families with special sports memories to feel like "part of the team." What if there were a way to bring children together with professional athletes? What if the special moments among families, spent cheering on their favorite teams, did not have to be more bitter than sweet? What if TAPS could help surviving family members celebrate the life of the one they loved and lost by helping them create new memories? What if family members, able to go behind the scenes, on the fields, and up close with players and referees, could connect with their fallen heroes while making new memories? TAPS quickly realized - while surviving children could be particularly impacted by these experiences - that fathers, mothers, brothers, sisters, wives, fiances, and friends could all be united through sports relationships. teams4taps was born from this opportunity.

The groundwork of teams4taps was lain with its first big success, the 2013 Washington Capitals Courage Caps program, which demonstrated that fans - along with sponsors and team partners - were on board with doing something big to support families of the fallen. Six days of hat and t-shirt sales solidified the foundation for continuing support from major professional sports teams and resulted in $93,000 for TAPS. With an enthusiastic support base, grateful recipient families and a campaign with demonstrated success, teams4taps began to develop relationships with other teams local to the National Capital Region headquarters.

Knowing that long-term success would depend on successful relationships on many sporting fronts, teams4taps raised both funds and awareness for the TAPS mission while bringing TAPS families together with players and representatives from the "hometown" teams - Washington Redskins, DC United, Washington Nationals, and the Kastles - in addition to establishing relationships with the Washington International Horse Show and the Citi Open. Having found great success with the one city, all teams approach, teams4taps was poised to grow nationwide.

New relationships quickly followed, as major sports teams stepped up in Baltimore, Salt Lake City, New York, Oakland, Boston, Philadelphia, San Diego, Phoenix, Seattle, Atlanta and many others. teams4taps now manages relationships with over fifty teams - all who open their training practices, stadiums, courts and locker rooms to surviving families. Coaches, staff and players spend time with survivors, listening to stories of how how their hero loved a team. In 2015 alone, almost 2,000 TAPS survivors attended a teams4taps event across the country.

While the program has expanded nationwide, it's also continued to grow where it started - with Courage Caps. In 2014, Telos expanded their generous support of TAPS, funding the entire Courage gear line. Monumental Sports & Entertainment Foundation lent their expertise in hat and t-shirt production and design, and the resulting Courage gear was available online, at games and at team stores. TAPS has been the proud and grateful recipient of the proceeds from these sales.

Ongoing partnerships with Telos Corporation and Monumental Sports & Entertainment Foundation, together with the Washington Capitals and the Washington Wizards, have continued to benefit both loyal fans and surviving military families. The Courage Caps program raised more than $148,000 for TAPS this year. The value of the Courage Caps program far exceeds monetary donations by also increasing awareness of the TAPS mission. It highlights the courage exhibited by the grieving military families TAPS supports on their journey to find comfort, care and healing.

Similarly, the value of a surviving family member's experiences at a game far exceeds that of a ticket. Behind-the-scenes, VIP experiences and player meetings help surviving family members celebrate the life of a hero and the love of a game. Jason Kriz is just one of the many survivors who has been affected by teams4taps. "All the coincidences that led me to attend a teams4taps game with my favorite team, the Cleveland Cavaliers, was definitely my brother looking out for me and reminding me he's still around looking down on me from heaven," Kriz said about his experience.

Do you have a memory of attending a game, collecting player autographs or never missing a kick-off with your hero? Your stories and experiences help us shape the development of future team relationships. Tell us about your hero and the team they loved by emailing teams4taps@taps.org.