It was a week after the conclusion of the 18th Annual TAPS National Military Survivor Seminar and Good Grief Camp when we received an email that read, “My name is Casey Callanan, and I live in Arlington, Virginia. I applied to be a volunteer earlier this week and completed the training online. I was hoping I could get some information on what the next step in the process might be, so I can be involved in some of TAPS efforts.” 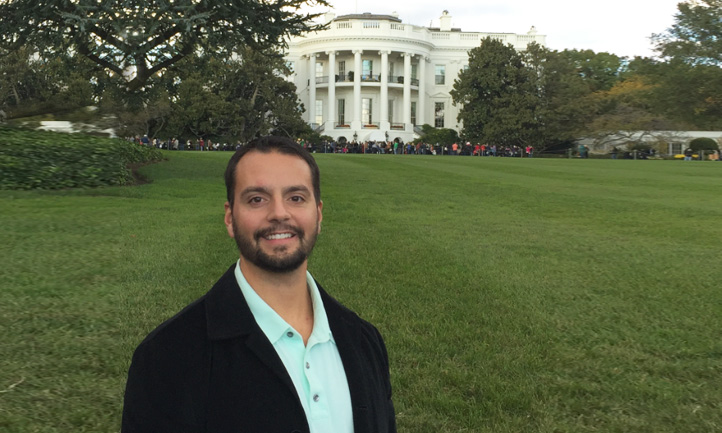 As an organization that enlists the help of volunteer support, we receive emails like this daily, but it's all too difficult to gauge a person's level of commitment on a single strand of static text in an email. Little did we know when receiving that email that Casey would become one of the faithful - a volunteer who commits to any hard task he's given.

Casey has volunteered with TAPS since 2012 and has remained a strong pillar of support even after moving from Arlington, Virginia, to Baltimore, Maryland. Casey's efforts, commitment and activity have only increased since he began volunteering with TAPS.

Casey's interest to get involved with TAPS was spurred by a speech delivered by Vice President Joe Biden during the 18th Annual TAPS National Military Survivor Seminar.

"I was driving north on I-95 after work on the Friday before a sunny Memorial Day weekend I was planning to spend on the Jersey Shore in 2012," Casey recalls, when he first heard the Vice President's speech. "While messing around with my radio dial, the Vice President's voice suddenly gripped my attention. The radio station's voiceover explained Joe Biden was speaking at an event organized by TAPS. Having recently moved to the Washington area from out-of-state, I had no idea what TAPS was until that moment."

Casey still remembers to this day how the Vice President's speech captivated him like nothing he had ever heard on the radio before. "The storytelling from our Vice President was so vivid. It was a call to action for me," Casey said as it led him to do more research about TAPS, the mission and ultimately the families TAPS supports. Casey immediately saw that hope existed for those friends and families who were dealing with an impossible loss. He saw that there's a community supporting each other, those dealing with similar realities. It was at that point he decided that he wanted to play a role in helping.

While the Vice President's message was the catalyst for Casey in making the decision to reach out to TAPS, there's a big part of him that inherently wants to give back to others. He was born in Providence, Rhode Island, but moved to the western suburbs of Chicago, Illinois, at a young age, where he was eventually raised. He's the son of a social worker, and growing up having had that exposure through his mother, there's always been a deep-rooted desire to dedicate his time and energy to causes he feels are worth fighting to support. "It's in my blood," Casey said. There's a passion that resides in Casey about TAPS, which is his driving force.

Casey's mother had a significant impact on him growing up. "When I was younger, in my teens, my mom would always be doing something to give back to the Chicago community in which we lived, whether it was for work, or a charity where she volunteered," Casey said. "She would always do what she could to include me and get me involved with the work she was doing." Casey noted that while he didn't think much of it when he was young, as he grew into a young adult, he realized that he truly wanted to give back and wanted to give his time. "She led by example; she didn't just talk about it. But she was attracted to those situations where there can be hope injected into the lives of other people," Casey said when reflecting on his mother. "When I became an adult, I wanted to give back and devote my spare time and energy for something I believed in. My mom taught me to find a cause I cared about and to budget time for it." Simply put, that's what Casey did, and still does, for TAPS.

Casey has been a jack-of-all-trades taking advantage of his social prowess and professional skills to work for good. When Casey first came to TAPS as a volunteer, he was working as a Technical Writer in Washington, D.C. Because of his writing expertise, Casey dedicated his time updating the TAPS Volunteer Handbook that is sent to volunteers across the nation.

Shortly after the completion of the Volunteer Handbook, Casey took a new position in Baltimore, Maryland, at the American Urological Association with its Marketing and Communications Department, and he started branching out to work other staffing areas within TAPS. Casey often utilizes his professional marketing skills to represent TAPS at various events. He helped with public engagement and awareness efforts at the Marine Corps Marathon Health and Wellness Expo where TAPS has an exhibitor booth to serve our runners and at the 97th Annual American Legion Convention that took place in Casey's backyard of Baltimore.

Casey is always cognizant of the way he needs to carry himself and speak to the public while representing TAPS. He knows that he's an extension of those who receive services and support from TAPS, so he truly respects that position because of the impact it has.

Casey enjoys volunteering because of the diverse opportunities that allow him to explore all areas of TAPS, be a social butterfly and pull out his inner child. In 2013, Casey had the opportunity to volunteer with TAPS during our participation as a Corcoran Gallery of Art Exhibitor partner for the War Photography: Images of Armed Conflict and Its Aftermath exhibit. At the event, Casey was able to work with children in attendance and assist them in making thank you cards for families of fallen service members. He also read Klinger, a Story of Honor and Hope to the kids. Casey described that as a treat to read to children because he rarely gets a chance to work with kids.

Understanding his own limitations, Casey is able to excel as a volunteer. "While the scope of the actual healing I can provide is limited without me having served in the military or having experienced a profound loss, I can still make significant contributions to TAPS." For Casey, attitude is a big part of it. "It starts with having high energy and a smile. While volunteering is oftentimes very simple and uncomplicated, there is also an element of responsibility I take very seriously. Showing up on time and being reliable is a major part of that responsibility."

TAPS is fortunate that Casey's reaction to Vice President Joe Biden's speech at the TAPS event led him to volunteer. "He's a politician, but it wasn't about politics," and that's what resonated with him, Casey said about the speech.