Tutus. Knee socks. Sweat bands. And bowling shoes? Earlier this year, USAA employees sported some of these items and more to show they know how to have a good time – all in the name of helping surviving families. 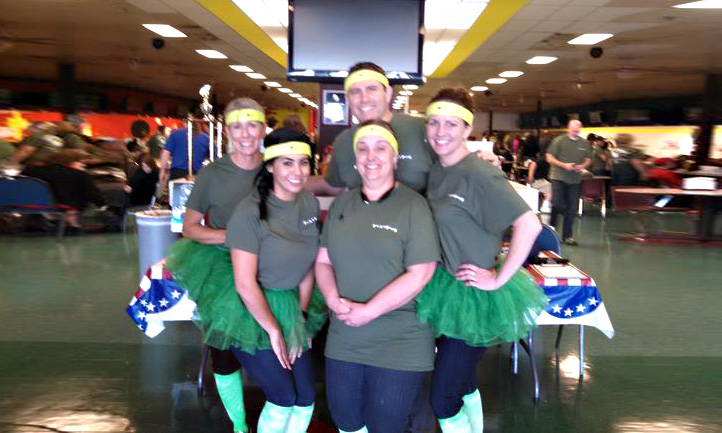 USAA joined TAPS in honoring families of the fallen by hosting USAA's annual Bowlathon in San Antonio, Texas. During the four-day event in March, 4,300 USAA employees and their family members helped raise more than $250,000 to benefit TAPS. According to USAA Community Programs Manager Greg Smith, the 2015 Bowlathon generated the greatest amount of support from employees to date, both in the number of teams bowling and dollars raised.

"It's always uplifting to see the passion and enthusiasm that USAA employees show during the Bowlathon, which is representative of how they serve military members in their jobs every day," Smith said. "It was an amazing view to see a 'sea' of the green TAPS shirts as I watched our employees having fun while supporting a cause close to all our hearts."

The funds raised will go to help further TAPS programming. But the Bowlathon is just one of the many ways USAA has been involved with TAPS. USAA, The USAA Foundation, Inc., and the USAA Federal Savings Bank have all provided other financial support, and USAA employees have volunteered to serve as mentors for children at Good Grief Camps in San Antonio and Tampa.

"In all that we've seen, TAPS exemplifies a gold standard for operating a nonprofit, from the services it provides to the rigor it uses to measure the impact of its efforts," said Harriet Dominique, Senior Vice President of USAA Corporate Responsibility and Community Affairs.

This year, Dominique and other USAA representatives toured the TAPS headquarters in Virginia and attended the annual Honor Guard Gala in March. Dominique also spent time with survivors during a tour of the Pentagon at the TAPS National Military Survivor Seminar.

"These first-hand experiences reinforced our decision to support TAPS and the pride we feel in standing behind an organization that does so much to serve the needs of the military community," Dominique said.