I share a lot as a writer. I like to think of myself as transparent. But there are still a lot of things about me that aren’t transparent. I struggle with letting others see my grief. Mourning in front of others is a challenge. Some people bottle up their anger and frustrations. Me, I bottle up my tears. 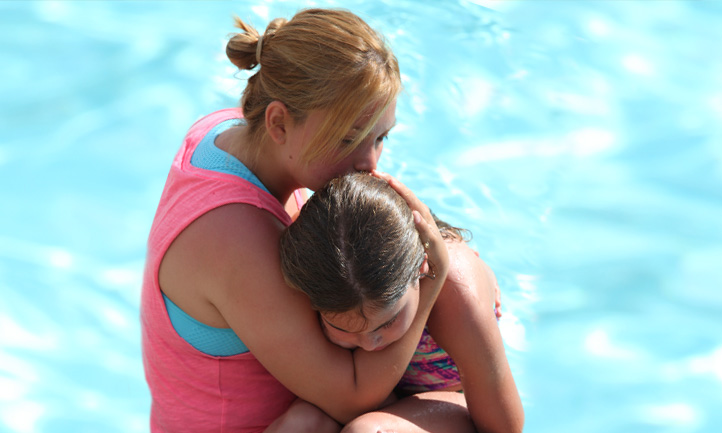 Anyone who knows me personally knows that I don't like to cry in front of an audience. I don't like to let those walls down because I hate feeling vulnerable like that. But recently, I talked about this with my best friend of more than twenty years. I told her how hard it had been, keeping all those tears bottled up around my kids since my brother Staff Sergeant Joshua Jacobs died two years ago. Even my own kids didn't get to see my vulnerabilities. I couldn't think of a time I had ever cried in front of them. Aside from feeling vulnerable, I also never wanted my kids to feel my burdens; I never wanted them to feel like they had to take care of me or be sad, stressed, or worried for me.  I just want them to be kids. In my mind, tears would put my burdens on them.

My friend gave me simple, yet such meaningful advice; "Give it a try some time." So, I did. I was sorting through old military uniforms of my husband's and mine. My friend is making me a quilt of as many of my brother's things as our mom could bear to part with, and she needed some more items to fill it in. Since my brother, my husband, and I were all three in the Air Force, I figured our old uniforms would blend nicely. I also always felt like my little brother has followed in some of my footsteps, and it seemed fitting to have our uniforms together. I was proud to share the common experience of military service with him. He had made great strides in his career and worked his way through TACP and JTAC School, the "elite of the Air Force."

While sorting, I came across a military-issued raincoat of my brother's that he had given me when I couldn't find my own. I had forgotten about it. I was so happy to see the raincoat. I put it on and it brought me joy for a few minutes. But as I kept wearing it around the house, the sadder I got. Then I felt the wave of grief rolling in.

I could still hear his voice, "I've got one you can have, Sister." I replayed the memory of him giving me that coat, having never before realized how special such a seemingly small moment would be one day. The thought of never having any more of those moments hurt terribly. Then the memories of the day he died, September 13, 2013, came rolling in on top of the first wave; swallowing it up in one gulp. He was only twenty-three years old. He still had too many places to go and see in this beautiful world. The memories began to play in my mind again. I couldn't listen to them anymore.

All I could feel was the moment my entire identity, the only one I'd ever known, was stolen from me and would never again be given back. I could feel the terror, the panic, my whole world crashing down and being swallowed by the monstrous ocean of grief. I was drowning in its depths, and I couldn't breathe. I could feel that moment when I realized I truly have no control in this life because the ocean of grief can be far bigger and stronger than me. I was reminded that the only choice I had was to submit to its authority and learn to swim.

I could feel a sudden wave of tears swelling in the pit of my stomach and make its way into my throat. I tried to ignore the tears and continued sorting. But I realized I couldn't ignore them any longer. My first instinct was to hide in my room. So I did, and I let the wave of grief come over me. As I sat against my bedroom door, feeling the waves swell up and then break as tears fell, I remembered what my friend said. It took me a couple of minutes to gather the courage to drag myself from my room. But I did. I went back to sorting the clothes in the living room where I had left them and just let the tears fall. Once the kids took notice, they began to ask questions.

I kept it simple; "I'm sad because I miss Uncle Josh." My grief was received with silent, sincere hugs; it wasn't as bad as I'd imagined it would be. It was comforting. It was healing, and I realized that it was okay to cry in front of my kids. I was amazed at the way kids instinctively know how to comfort. They didn't have any words, and I imagine they knew they didn't need any. They only hugged me, and words weren't needed. They understood. They had all I needed right in those moments.

I had given it a lot of thought since the talk with my friend. I had wondered if it would be a good idea and if I'd even be able to do something like that. But was I really protecting them by always hiding my tears? Or was I only protecting myself? Would they grow up and know how to comfort someone else in moments of sadness if they were never allowed to see them? Would they grow up and think that they had to bottle up their sadness and go through it alone too? Would they think the rest of the world wasn't allowed to cry and that it was something everyone should always do in private?

I concluded I had been doing them an injustice to shield them from my sadness and tears. I am setting them up to fail in a world full of emotions that people have to deal with every day. Sadness is a part of life. Grief is a part of life. It is real, and to deny its existence, I believe, is only going to hurt them in the long run. They cannot learn how to face the difficult parts of life in healthy ways if they have never been exposed to them.

When my daughter hugged me she began to cry too. Maybe she needed it just as much as I did. It was the first time since he died that we cried together and acknowledged that the grief is even there. I realized then that the walls I had put up to shield them from my pain had also created a barrier for them to be able to share their pain too.

Now, we are learning to swim together, and I know that it's okay. I let my children know that grief and sadness are parts of life, and love and hugs are the lifesavers that will help us float and eventually swim. We cried. We hugged. We worked through the wave of grief together in love and then carried on about the rest of our day. There is a difference in a parent who casts burdens onto his or her children and a parent who allows children to see how to cope with them in healthy ways. I am learning that difference.