Cory J. Smith. The man that would unknowingly send me to Alaska to be surrounded by the love and support of others on the grief journey like me. 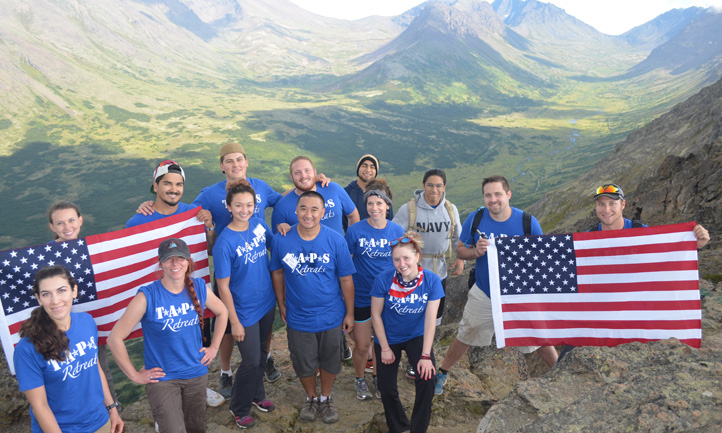 I have been a part of the TAPS family for many years, but never have I shared a bond like this with another group of adult children. We traveled to the "Last Frontier," not knowing quite what to expect and maybe for a few, like myself, questioning what exactly we were hoping to get out of this retreat. However, after the mixed feelings and emotions subsided, we found comfort in each other's presence. Comfort you can only get from sharing with someone traveling the same road as you and running into the same obstacles. The road to healing is far from over, but I now know I don't have to travel that road alone because of the love that was found in, of all places, Alaska.

The adventure began with sharing stories of our fathers, which brought feelings of nostalgia over the room. I realized that everyone there was dealing with the same hurt as me. This made it a bit easier to talk with the group about my situation, as I am usually not one to share my feelings with others.

We headed out for our hike up Flattop Mountain. At the base of the trail we were each asked to find a rock that somehow spoke to us. We traded rocks with another member of the group. The rocks represented the burden we carry, and by trading our rocks we were taking away someone else's burden and accepting it as our own. We carried one another's burdens to the top of the mountain with us, where we would eventually chuck them off of the side of the mountain. Some of the "burdens" were small, but I can think of one in particular that was rather hefty, and it was still lugged up the mountain for a friend all the same.

The hike up the mountain was the perfect opportunity for bonding and forming new relationships, as the group of almost strangers did not let each other fall behind and continuously pushed one another forward. Once at the summit, we celebrated our victory by relieving our burdens. It felt great to conquer the climb together as a group. And I can boast that, with the exception of two very well conditioned brothers, I was the first to the top. It amazes me how close we became as a group on the hike up a mountain - and this was only the beginning.

I also felt connected to my father in these moments. Before going on the retreat, my mom emailed me photos TAPS could use for the photo button of my father. While we were on top of the mountain, I took a photo, holding up the American flag. It wasn't until we descended that I realized the photo of me matched one of the images my mom sent of my father holding an American flag in Kuwait. It seemed fitting that I'd experience a close connection to him in such a safe space.

A few of us met back at the hotel for some much needed relaxation. This was where the first deep healing conversation happened for me. We spoke more personally of our fathers and the space left inside after our losses and how they affected our lives individually. In this moment, there were lifelong friendships being formed. Even though the circumstances that brought us together were dismal, I am glad I got to meet these other adult children. I know the road to healing is a long journey, but in just one conversation between people on the same level as me, I traveled quite a ways.

The next day was another trek up the side of a mountain; this time it would be a whole new experience as we headed to Exit Glacier. It offered even more opportunity for supporting each other as it was not an easy hike. We made it as a group. We developed inside jokes along the way. It seemed as if we had known each other for much longer than a day. One of our glacier guides asked me if our group knew each other before coming on this trip. He was astonished that, with the exception of a few, we had just met. No length of time would bring us as close as the common bond we all shared.

Even though our legs were aching and our bodies drained, we were not done exhausting ourselves; we still had a 5K or marathon to run. That was no easy task after the long hikes we had done the days before. I didn't think I had enough strength left to finish the run, but I was not about to give up on the last leg of our trip. The Big Wildlife Run was brutal, but the whole time I felt like my dad was watching me as I ran. I was running for him, so there was nothing that was going to stop me from crossing the finish line. Finishing that run felt amazing, and I was lucky enough to have such great people waiting at the finish line to congratulate me.

The weekend was definitely not one for the weak at heart; I still wonder how I kept going. At some points during the weekend, I felt like I couldn't go any further. But the thought of my father and how much he had always believed in me, accompanied by the encouragement I received from everyone around me, kept me moving forward through it all. In a weird way, the physical pain actually felt good. I went farther than I thought I could, and I met some great people along the way. I was proud that I actually allowed myself to open up and share my story instead of keeping it bottled inside like I always had before. It felt good to stand on top of a mountain and look down at just how high I had climbed.

In the end, even with all of the punishment I put my body through, how bad it hurt to keep putting one foot in front of the other, I wouldn't change a single part of the trip. These activities brought us all together and gave us someone to lean on in the future. I went to Alaska alone, but I left with a whole new family with whom to share my journey.

Thank you, TAPS, for the love and hope you give us all in dealing with our loss. And a special thanks to Bonnie Carroll for blessing us all with such a great place where we can feel welcomed and understood. A place where we all belong and can find comfort in the presence of others.