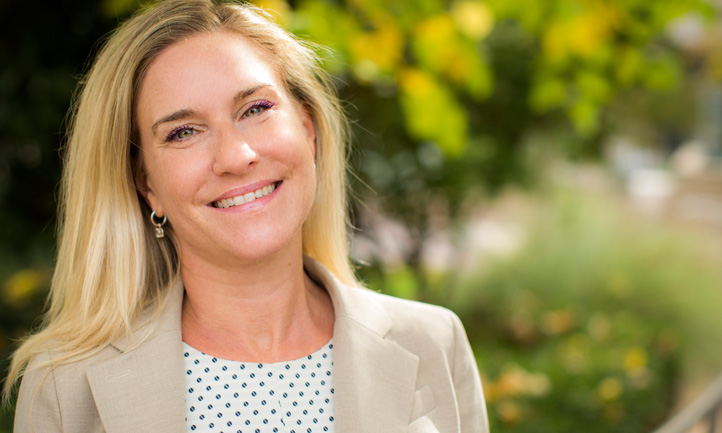 That's the approach Katherine Castelo, Licensed Clinical Social Worker, takes when serving TAPS families in her practice. Katherine's dedication is congruent with the level of care TAPS provides to all those seeking assistance.

Katherine never puts a time limit on these conversations. "When [TAPS families are] going through a loss, everyone manages it differently, and I want to address them where they physically and emotionally are." It's in those tough times, when someone needs a listening ear and they've built up the courage and trust to open up, that limiting time can be detrimental and uncompassionate.

Katherine comes from a family steeped in military tradition, with three of her grandparents serving in World War II (her paternal grandparents met while serving in the Navy).  She is a military spouse; her husband served ten years in the Marine Corps and continued his service with the USO. Katherine now works as the U.S. Army Reserve's Psychological Health Program Director. She also owns her own private practice, Awaken Wellness Center, in northern Virginia. Specializing for a decade in post-traumatic stress, critical incident and trauma, and loss and grief therapies, Katherine has made it her mission to treat military members, their families, and veterans in her community and nationwide.

"Most of the time the families aren't local; a person who doesn't have resources where they are still needs resources," she said. Katherine utilizes Skype, video, or phone calls to offer support. Sometimes, the families she serves may travel and need someone with a flexible schedule. Like TAPS, Katherine commits to "stay with that family as long as they need [her]."

Katherine first connected with TAPS in 2008 when a family came to her about a recent loss. She was working as a civilian employee assistance program manager for the Department of the Navy and a casualty assistance consultant for the U.S. Naval Criminal Investigative Service. The mission of TAPS resonated with her. "[TAPS was] so responsive and took such good care of this family that I wanted to be a part of their network," Katherine said. "I wanted to offer my expertise to TAPS, even though I was willing to volunteer in any other way needed."

Katherine grew up in Hartford City, Indiana, a small Midwestern town, one of five children to parents who taught her the importance of giving back. Coming up on nine years, Katherine's involvement with TAPS marries her passion for the military and the desire to help others.

She provides clinical therapy to families and recently presented two sessions at the TAPS National Military Survivor Seminar and Good Grief Camp, Grief Strikes at Night, and Is Therapy Right for Me. "TAPS makes you feel like you're a part of the TAPS family," Katherine said.

Volunteering with TAPS families is an experience Katherine truly appreciates. "It's very rewarding to be able to give back to families, to know that TAPS is providing a support network to many who have lost a loved one," she said. "TAPS has made volunteering a very welcoming, smooth, easy, and rewarding experience." For Katherine, time is the biggest challenge in volunteering. "I would like to have more hours in the day to give," she said. While quite busy, Katherine provides care on a level that sets her apart from others.

TAPS is truly thankful for the work of Katherine Castelo and the many lives she's touched. Time is such a precious gift, and Katherine is consistently giving her time without expecting anything in return. TAPS appreciates every minute.