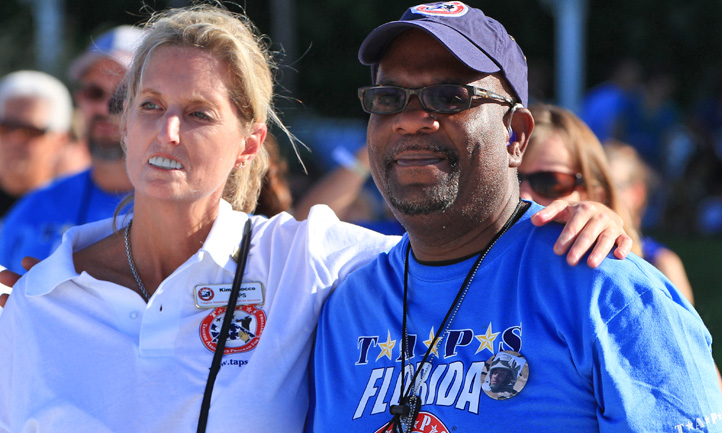 When my husband died by suicide in 2005, I asked myself all these questions and many more. But the most painful question, by far, was: Why did he choose to leave us?

I agonized over the thought that the man I had known and loved for twenty-three years chose to leave our two beautiful boys and me. I felt his death was a rejection of his life with us. I couldn't understand why our immense love for him wasn't enough to keep him alive. I was desperate to answer this question. During the day, I would search for answers by researching, talking to anyone who might know the answer. At night, I would have nightmares about him walking away from us. I felt tortured by the thought that he could choose to leave us.

After much effort, I began to gain understanding and relief, having spoken to many survivors of suicide attempts as well as survivors of suicide loss. Long-time friend of TAPS, LaRita Archibald, addresses this question in her book Finding Peace Without All the Pieces. It helped me better understand the suicidal mind and shift my thinking from "it's all about us" to "it's mostly about him."

In the book, LaRita references Edwin Shneidman's The Suicidal Mind, in which he defines the commonalities   of suicide. He points out that the common purpose of suicide is to seek a solution to a problem. The common goal of suicide is to end pain, not necessarily to die. He asks, "Is suicide a choice? Or did the individual who ended his or her life believe, at that time, there was no other way to find relief from the pain? Was it their choice to be gone from this life, and their loved ones, or was it an act born of a desperate need to be free of emotional pain, pain they perceived as endless, unrelenting, and permanent? Pain that was so overwhelming and persistent they were blinded to other options?"

LaRita adds, "Following my son's suicide I was greatly conflicted over the issue of choice. It was beyond my comprehension that this cherished young man, who loved his family and appeared to love living, would choose to leave us by deliberately ending his own life. His 'choice' was contrary to everything he had been taught and that we thought he believed. It was not until I began to study the vast variability of human behavior, and especially suicide, that I had an inkling of how difficult and painful that 'choice' had been for him."

LaRita continues, "At a suicidology conference a number of years ago I made the acquaintance of a young man who had attempted to end his consciousness in order to stop unendurable pain. He eloquently articulated the pain of living; of going through the motions every day, trying to keep at bay the overwhelming pain he felt. As the pain of living grew more intense and his future seemed more hopeless, he planned how he could end his life. One morning he awoke with a greater sense of dread and hopelessness than ever before. He opened his pill stash and swallowed one handful after another. His life was saved when his brother stopped to wish their mother a Happy Mother's Day and found him. As a result, depression was diagnosed, treatment begun, and his sense of well-being eventually restored. He had come to tell others of his choice, his near death, and his revived love of life. When I asked him why he had chosen Mother's Day of all days he answered, 'I was totally oblivious to what day it was when I swallowed those pills. I just knew I could not face another hour of living with my pain.' He realized that had he died that day his mother might have forever perceived his death as a message of complete rejection."

This excerpt from Finding Peace Without All the Pieces was supported by information I gained from others who had attempted suicide. One of the most pivotal moments of my own grief journey was hearing Kevin Hines talk about his suicide attempt. Kevin described a depression and emotional pain that was all-consuming and so intense that he could not think of anything but ending the pain. He expressed unwavering love for his parents and girlfriend but admitted that in that brief moment he could not even think of them or the pain he would inflict, should he end his life. In fact he had convinced himself that they would be better off without him. His ability to think of any other escape was also absent. He went on to say that he alone knew the extent of the hopelessness and helplessness that he felt.

As Kevin spoke, I felt a wave of calmness and understanding that I had not felt in years. I began to accept that my husband did love us. He chose to end his pain in a moment when his thinking was clouded and narrow. His pain was great at the same time that his ability to see other options was blocked. He did not choose to leave us; he just could not see another way out of his darkness. Like Kevin, he must have convinced himself that we would be better off without him. It was the only thing that made sense to me.

Although it is so hard to imagine the suffering and pain of our loved ones, it does help to understand their state of mind at the time of their death. We can never fully understand the depth of their despair, but we can find comfort in knowing that they were most likely trying to end pain-not their life or their relationship with us. It also helps to know that a "suicidal mind" is not a mind that is logical. Most survivors of suicide attempts look back at that moment and say things like "I had tunnel vision" or "I just couldn't see any other way."

We cannot bring back our loved one, but we can learn from our experiences and move forward with more information about preventing further losses in our families. If you or a family member are having thoughts of hopelessness or helplessness and having thoughts of suicide, get help. Don't continue to suffer day after day. Don't wait until the day is so dark that you lose hope.

By Kim Ruocco, MSW, LSW: Kim Ruocco earned her Master’s Degree in Clinical Social Work from Boston University. She has worked in the field for more than twenty years, providing mental health services in various settings. She is the Director for Suicide Outreach and Education Support Programs at TAPS, providing suicide prevention and postvention trainings to survivors and military personnel throughout the country.