A wedding is a bittersweet event when the bride and her family are still grieving the loss of one person whose presence at the wedding is critical. As my family prepared for my nuptials to my boyfriend of six years, we were missing one important person, my brother and only sibling, Corporal Richard Allgower, USMC. I was so devastated at the loss of my brother that I often wondered if I would ever feel happiness again, much less get married. 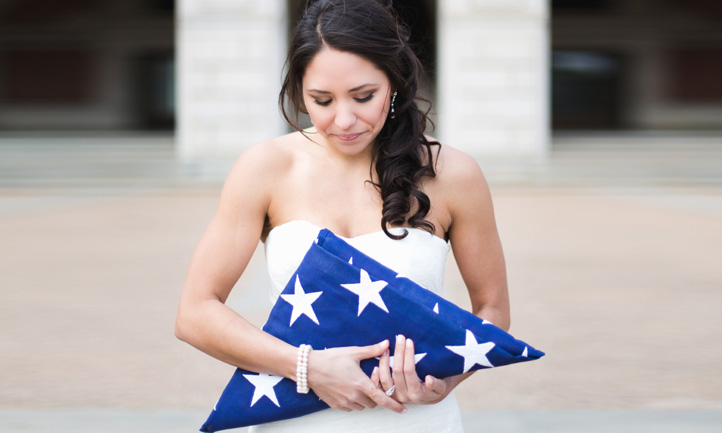 On Memorial Day weekend in 2010, Richard stopped breathing due to complications from a cancerous tumor on his brain stem. Emergency medical personnel resuscitated him, and he was rushed to the hospital. A few days later, his doctors told us that there was nothing they could do. Richard was sent home for hospice care and was told he had six weeks to live. I didn't know what to say because my heart was breaking; I could not imagine life without Richard.

A few weeks later, we were worried he would not make it through the night. One by one, we all said our goodbyes to him: grandma, my parents, his wife, and my boyfriend Chris. I told Richard he was my best friend and that I loved him and would miss him. I have no idea why, but I also said, "You're supposed to be at my wedding." As strong as he was trying to be, he started crying, too, just for a moment before he composed himself like the strong Marine he was proud to be. Richard died on August 15, 2010, after an incredibly inspiring and fearless fight with cancer.

At the age of 26, I lost hope in ever feeling the same happiness I had when my brother was alive. Nothing seemed to make me smile or laugh the way Rich could. He was my best friend, and we were supposed to grow old together, fighting one second and laughing the next.

My sister-in-law Lexie attended a TAPS Widows Retreat in August 2011. She told me that I had to attend a retreat, so in April 2012, I attended the TAPS Seattle Siblings Retreat, where the experience and people I met changed my life. For the first time since Richard's passing, I felt hopeful that I could actually live life again rather than just pass time.

Chris stood by my side for the darkest years of my life, and on August 18, 2013, he proposed to me with family and friends watching. I was overjoyed! My mom hugged me and then asked, "Who's the first person you're going to tell?" My heart sank, knowing it would have been Richard. I flashed back to that conversation we had and the sadness that overtook him when I mentioned him not being at my wedding. The joy in that moment didn't go away, but I knew that this would be a bittersweet process.

I couldn't believe Richard really wasn't going to be at my wedding. He wasn't going to be there to tell me when I was being a brat during the planning process, like only a big brother could. He wasn't going to be there to tell me that I looked beautiful in my dress. Richard would have been in our bridal party and his spontaneity and wit would have added humor, light heartedness, and brotherly love to the festivities. From the beginning, I wondered how we could incorporate Richard without allowing his absence and my sadness over it to overshadow the complete joy I had in my heart.

One thing I did know was that Chris was the man I was meant to spend the rest of my life with. He spent a significant amount of time with Richard. The two first bonded on a trip Chris and I took to California to visit Richard and Lexie. Chris was also able to see firsthand how close Richard and I were. Chris and I both wanted to honor Richard, but I definitely had moments when I had to remind myself that our wedding was not just about his absence. However, I didn't want his absence to be the elephant in the room that everyone was afraid to mention. It's important to me that people not only know how much I miss and love my brother, but also that I will always include and honor him throughout the rest of my life.

Once Chris and I set the date, plans went into full speed. On the day I went shopping for my dress, I realized that the wedding would be touched by Rich. While we were waiting to check out, my mom walked to the section for bridesmaids' dresses and saw the perfect shade of blue, my favorite color. I immediately knew that would be the color for my bridesmaids' dresses. The tag listed the color as "Marine Blue," and so I had my "something blue."

I was toying with several ideas to incorporate Rich into the actual ceremony. The most popular suggestions were to have someone stand in his place or to have a picture of him on the altar. Instead, I decided to leave the maid of honor position-designated for the bride's best friend-open for him. The more I told people, the happier it made me. It was a subtle gesture, but still made it incredibly obvious what a gap it is not having Rich in my life. The printed program read, "Maid of Honor: Reserved in memory of Richard Allgower, the bride's brother and best friend."

My bridal portraits contained a special photo with the flag that had been draped over Richard’s coffin and was presented to Lexie. When I asked her if I could use it in my portrait, it became my “something borrowed.” The portrait was on display on an easel in the reception venue.

As a shower gift, I received a locket that contained a picture of Richard in his uniform. Lexie made the floral arrangements and incorporated the locket into my bridal bouquet. I was able to hold Richard in my hand as my Dad walked me down the aisle. At the reception, Rich was present in spirit, in part because his favorite cookies were there. Our grandma and aunt made walnut and apricot kolaches, a favorite Czech dessert to celebrate holidays.

When I found ways to honor Richard, I pictured him looking down at me saying, “Good job, Kat,” and any guilt of being happy subsided. The final tribute came at the end of our reception, as Chris and I walked out toward the red, white, and blue decorated pedi-cab. Guests joined in by waving small American flags, a symbolic way of saying, “We miss you, Rich!” He would have loved the gesture, especially when an impromptu chanting of “U-S-A” rang out from even non guests in the street.

The wedding was absolutely beautiful, not because of the decorations or dresses or venue, but because of the love that was apparent throughout. The “something old” in our wedding was how we incorporated our traditions, and the “something new” was the way we honored Rich. The special ways that we honored Richard didn’t take away from our wedding day; they made it more special for both Chris and me.

I never could have imagined surviving such an important day without my brother, but TAPS gave me the tools and confidence to allow Richard to be a part of my life without fear of what others might think. The love that we shared was enough to last a lifetime. I still carry it with me and now really celebrate with Richard in mind.