In some ways March 15, 2011, seems like yesterday and in others it feels like an eternity ago. That was the day my life turned upside down. I was completely helpless as my oldest son Joshua, 250 miles away from me, hung the phone up before he took his own life. That moment in time is seared into my memory forever. Somehow I just knew that he was gone, but I dialed 911 anyway. 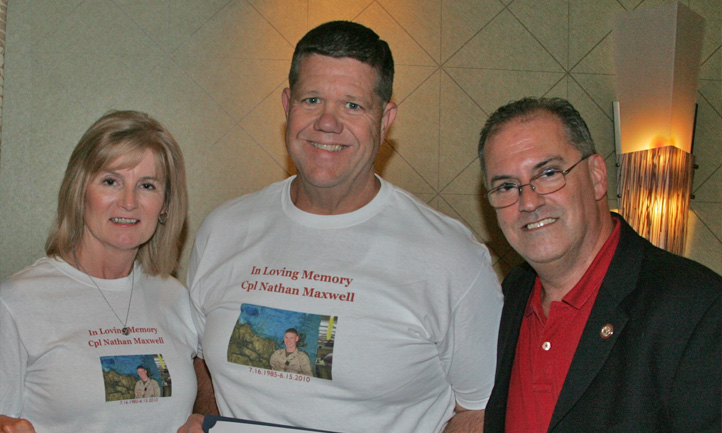 Once a very proud Petty Officer 2nd Class Riverine Squadron member with high aspirations, Josh had suddenly lost command of his hopes and dreams. Events over which he had little control seemed to blind him to all the good that surrounded him. His pride got in the way of allowing him to get the help he desperately needed.

Several days later, and after official notification of Josh's death, I began to plan his eulogy. In the darkness of my living room, I sat there wondering what had happened to my family. How were we going to be able to live the rest of our lives? We were dealing with a double loss within one month: my ex-wife's death from cancer and Josh's suicide. How could I take away the pain my remaining children felt? What about my own pain? Who in the world could possibly understand what we were dealing with? Who could help me understand how my son was brave enough to serve our country as well as he did, but was unable to face his own demons?

After one long and sleepless night, as the morning light began to fill the room and my mind was racing to nowhere, a thought flashed over me. It was a thought that blazed in among all of the negative emotions going on. It was a powerful thought, and I believe it was Josh's way of communicating with me. I don't remember much about that time, but I clearly remember that. Josh wanted us to find a way to turn his tragic death into something positive. Was there a way to honor his life instead of focusing on how he died?

The red folder our casualty assistance officer left for us the day after Josh's death caught my eye. I started picking up the various brochures and putting them down in a mindless sort of way. None of it was making sense to me-not until I picked up one with TAPS on the front. "For the loved ones of those who served and died," it said. I turned it over, and there it was, the answer to my earlier question: Remember the love. Celebrate the life. Share the journey. This totally resonated with me, and I knew I had to make the call.

I went to the website, and shortly afterward dialed 800-959-TAPS. I immediately felt a connection with the person on the other end, and it wasn't long before she encouraged me to attend the National Military Suicide Survivor Seminar in Colorado Springs. I had been to a few support groups already and had found them uncomfortable, so I needed convincing that this would be different.

After expressing my fears, and although no promises were made, I was assured of a remarkable experience. I thought about the bravery it took my son to go into a war zone. If I couldn't summon the courage on my own, I would find what I needed through my memory of him.

Six months after I had initially thought I was completely alone, I attended the National Military Suicide Survivor Seminar and found myself surrounded by more than 300 other survivors of suicide loss. I had never felt so much love, compassion, hope, and healing in one place. I was grateful to have been led to this haven.

The journey began to move forward from that point on, and I was able to learn what it meant to be a TAPS Peer Mentor. As survivors, we are all mentoring each other in one way or another. "Survivors helping survivors heal" is the magic of TAPS. We are able to connect with each other in a way that others could never understand.

But how do we know we are being the best support we can be? What do we know about grief other than our own experience?

It wasn't until I went through the TAPS Peer Mentor Training that it dawned on me. Each of us experiences grief in a very personal way, and although there are similarities in many of our stories, there are just as many differences. Through the training I realized I would never be an expert on grief. Mentoring is not about teaching; it's about listening and learning. It isn't about having the answers; it's about sharing the journey. One of my mentors, Darcie Sims, used to say, "Your presence is the greatest gift you can offer someone else."

After the training, I felt confident in my ability to restore hope in other actively grieving survivors without causing them additional pain. TAPS has allowed me to remember the love I shared with Josh, celebrate his life, and share the journey with my new TAPS family.

The Peer Mentor Program is the heart of the TAPS mission. I'm proud to say I have found meaning in the loss by being a part of this vital program. I will always love and miss my Joshua, but his legacy will be here forever, especially with the connections I have made.