The last full week of September is a special one for the TAPS community. Since 2018, Congress has recognized this time as Gold Star Families Remembrance Week providing an opportunity for the nation to pause as they honor and remember the sacrifices made by all those who have lost a loved one who served in the military.

“Our nation is forever indebted to the brave men and women who laid it all on the line for our country, especially those who made the ultimate sacrifice in defense of our freedoms,” said Senator Reverend Raphael Warnock, who led this year’s resolution recognizing Gold Star Families Remembrance Week. “And for that, their families—who also sacrificed immensely—deserve recognition and our steadfast support as they work to navigate life without their loved one.” 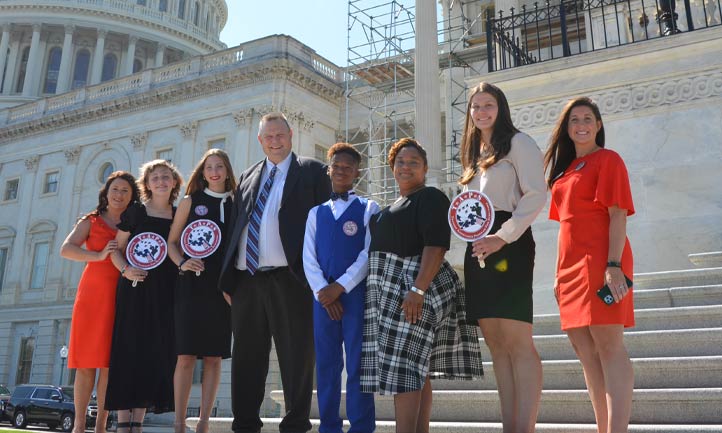 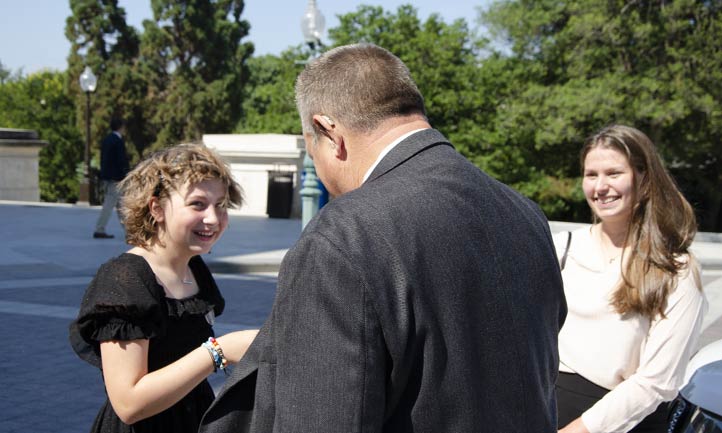 Earlier this week, TAPS families had the chance to spend a day on Capitol Hill visiting with the Congressional leadership that supported the resolution for Gold Star Families Remembrance Week. They met with Senators Reverend Warnock (D-GA), Cindy Hyde-Smith (R-MS) and Jon Tester (D-MT), all of whom are champions for legislation supporting surviving military members.

"It means the world to me that people have not only remembered the sacrifice my husband made, but that they also remember the sacrifice my son and I made in no longer having our Hero here with us,” said Mikki Frison, surviving spouse of U.S. Army First Lieutenant Demetrius Frison. “It was so special to be able to share our stories with the Senators on the Hill this week. Seeing their genuine reactions in wanting to do whatever they could to ease our pain and to comfort us gave me solace.”

Mikki was joined by her son, Chris, who presented Senator Warnock with a TAPS coin. Chris Frison was only seven-months-old when his father was killed in Afghanistan. He’s now 11-years-old and joined his mom in representing TAPS on Capitol Hill.

“The highlight of my day was meeting Senator Warnock, and thanking him for the Gold Star Families Remembrance Week bill,” Chris said. 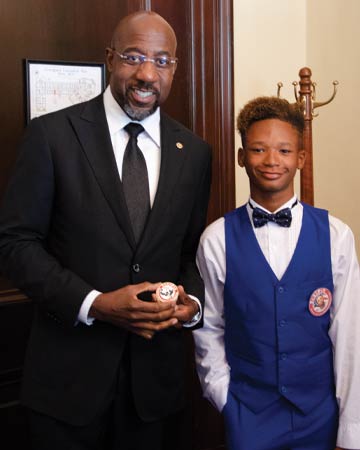 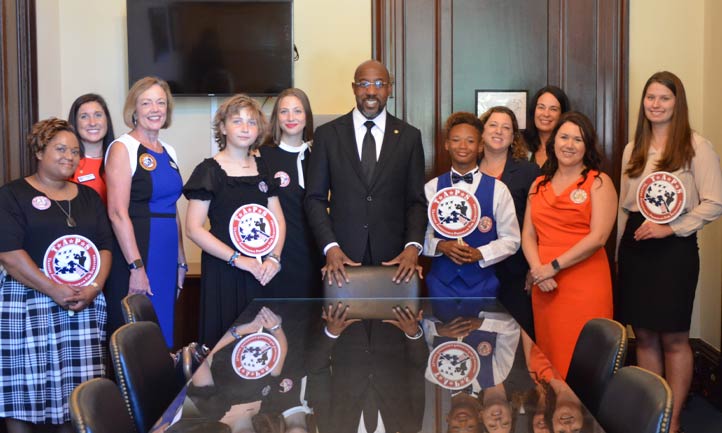 During the visit with Senator Warnock’s office, Mikki Frison, Traci Voelke, surviving spouse of U.S. Army Major Paul Voelke, and Krista Simpson Anderson, surviving spouse of  U.S. Army Staff Sergeant Michael Simpson, spoke to the senator and his team about their experiences as Gold Star spouses. In addition to the Gold Star Families Remembrance Week resolution, Senators Warnock and Jerry Moran (R-KS) sponsored and introduced the new Love Lives on Act of 2022 (S.4841), which ensures surviving spouses of those who died retain their military benefits if they remarry.

In between meeting with the senators, TAPS families had the chance to walk the halls of the historic Hart Senate Office Building, taking in a side of our nation’s capitol not many have the chance to experience.

Christina Wilson, surviving daughter of U.S. Navy Captain David Wilson who died of a service-related illness in 2014, shared, "In all my 14 years of living in D.C., I've never been in this building!" She and her younger sister Kate walked side by side reading off each Senator's name as they passed each office.

When the group arrived at Senator Hyde-Smith's office, they were warmly invited in; and, while seated around the Senator, had the opportunity to, one by one, share their stories and about their loved ones. 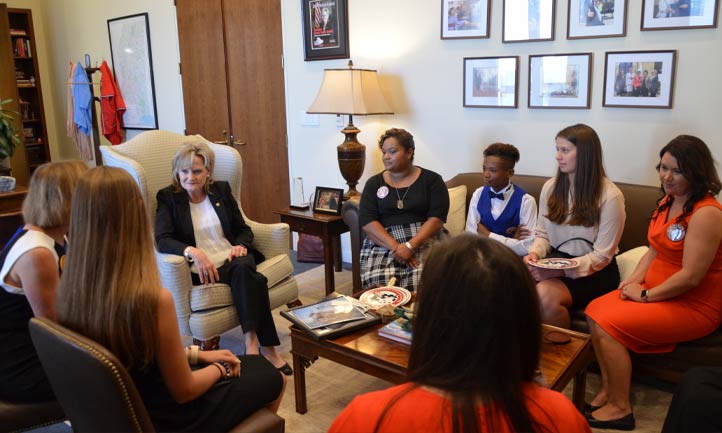 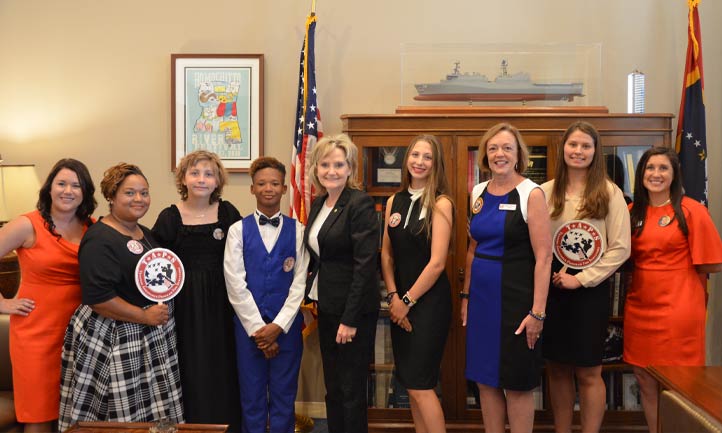 “Sitting in a U.S. senator’s office and talking about my dad, sharing my family’s story, that was really powerful,” said Kelly McHugh-Stewart, surviving daughter of U.S. Army Colonel John McHugh who died in Afghanistan in 2010. “Not only was I grateful for that opportunity, but I was also grateful to hear the stories of the other Gold Star family members in the room. You have kids that are 14, 11, 10-years-old, sitting there so poised as they talked about their parents and shared their stories with these senators. That takes a lot of strength, I was so inspired by them.”

Similar to McHugh-Stewart, Caroline Banholzer, surviving daughter of U.S. Air Force Colonel David Banholzer who died from a service-related illness in 2016, also appreciated the opportunity to spend time talking about her father.

“It was an amazing opportunity to meet Senator Tester—who helped pass the PACT Act—Senator Hyde-Smith and Senator Warnock, and thank them in person for helping TAPS families,” said Banholzer, who is a freshman at George Washington University. “My favorite part of the day was getting to speak with Senator Hyde-Smith. It was easy to talk to her because you could tell she wanted to know more about our families.”

TAPS is grateful to Senators Hyde-Smith, Moran, Tester, and Warnock, for spending time with TAPS families this week, and for their support, not only during this Gold Star Families Remembrance Week, but throughout the entire year.

“While Memorial Day is to honor those we lost to service, Gold Star Families Remembrance Week is to honor those who are grieving, and it was great to have so many members of Congress take the time to hear our families’ stories,” said Ashlynne Haycock-Lohmann, surviving daughter of U.S. Army Sergeant First Class Jeffrey Haycock and U.S. Air Force Senior Airman Nichole Haycock. “It makes our families feel heard, and it reminds members that there are real faces behind all of the decisions they make.”

In addition to remembering and honoring all Gold Star families, the Gold Star Families Remembrance Week resolution encourages the people of the United States to perform acts of service and goodwill within their communities. TAPS encourages anyone interested during this historic week and beyond to consider volunteering with TAPS or becoming a supporter of the TAPS mission.

On this Gold Star Families Remembrance week and every day, TAPS is here to support all those grieving the loss of a military loved one.