Earlier this month TAPS hosted its 14th Annual National Military Suicide Survivor Seminar and Good Grief Camp in Dallas, Texas. It was a weekend full of community, hope, and healing as hundreds of survivors of military suicide loss came together to celebrate and honor the lives of their loved ones.

"One of the things that we've learned over the past 14 years is that it's really necessary to have a safe place for survivors who are coping with their suicide loss–that's hard to find outside in the every day, real world," Dr. Carla Stumpf Patton, surviving spouse of U.S. Marine Corps SGT Richard Edward Stumpf, Jr., and TAPS Senior Director of Postvention Programs said. "When they come here, they tell us no words are needed. They can come here, be themselves, and share about their loss with no judgment, no stigma, no shame. They're understood here." 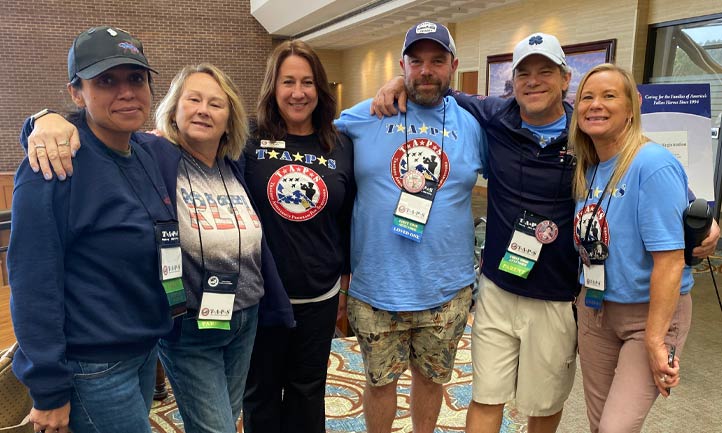 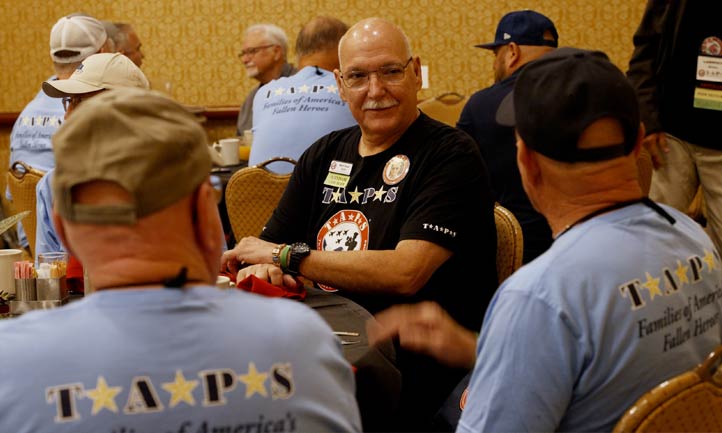 When survivors come together at TAPS seminars, especially the TAPS National Military Suicide Survivor Seminar, the TAPS peer-to-peer model and the healing power of connecting with someone who has walked in their shoes is displayed in full force. Dr. Frank Campbell, TAPS Advisory Board Member, said that peer connection has been the biggest difference between the first seminar 14-years ago and the current event.

"Today, we have a mix of people who are new to their loss, who are surrounded by people who have had a few more years on the trail. That peer support really shows up," said Dr. Campbell. "Compared to where we first started, back then we had a large number of people, but everyone was new, so there was no installation of hope available for them to find. They had to kind of hope it would happen in the future. Now that it has, it’s the returning people who make the biggest impact on the new people by just sitting at a table, eating lunch together, and talking. That's really what peer support is about. They don't have to believe it, it just happens." 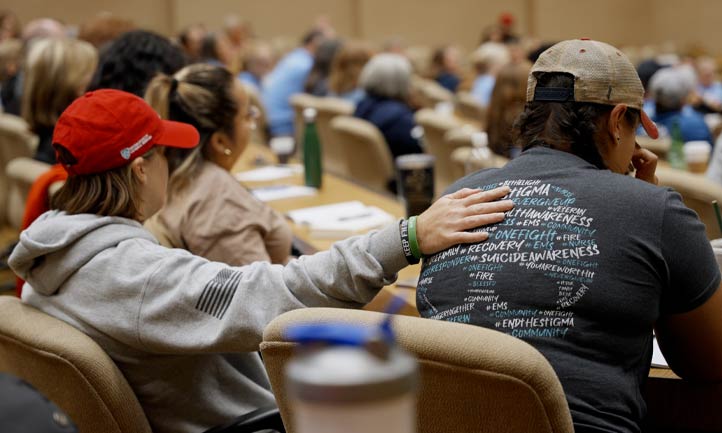 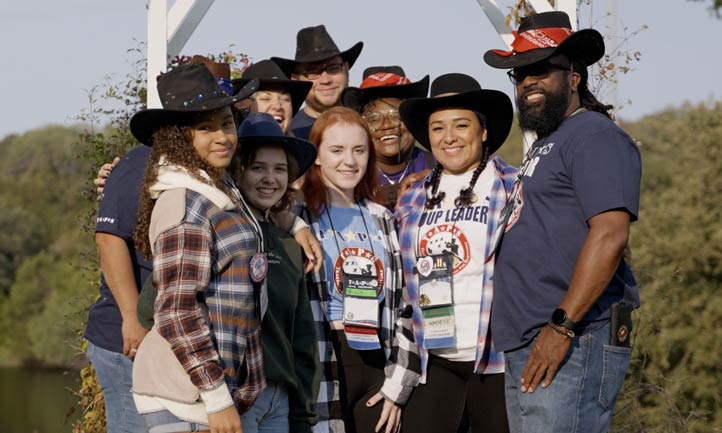 Like Dr. Campbell shared, it was the healing power of connection that Crystal Huff, surviving mother of U.S. Army National Guard SPC Zachary Ray Huff, found to be the most powerful aspect of the weekend.

"One of the biggest highlights of my weekend was actually unexpected," Crystal explained. "I had a few moments between sessions, so I went to visit the survivor sanctuary. They had an adult coloring book, so I sat down to do some coloring. One of the peer mentors sat next to me, and we started talking."

Huff explained that her son Zachary was a twin and, since his death, she's struggled to connect in grief with her surviving son. Upon hearing her story, the TAPS Peer Mentor connected Crystal with another surviving sibling. The two spent hours talking, and the surviving sibling was able to help Crystal work through and understand grief from a sibling's perspective.

"She came to the sanctuary and, together, we processed how I can connect to my son who is also grieving the loss of his sibling because it's such a different type of relationship," Huff added. "That was probably the most impactful thing for me."

The entire weekend was designed with connections like these in mind. From family style meals to interactive seminars and workshops to an open art studio, every event and detail of the seminar was intentional.

This year’s Art Studio was led by Jennifer Baldwin, board certified art therapist and certified grief and trauma therapist, and Jenna Preston, licensed clinical psychologist and registered board certified art therapist, and gave survivors a quiet space to connect with one another through art. Whether through painting, creating collages, or memory jars, Jennifer and Jenna spent the weekend working alongside survivors and were impacted by the stories they heard. 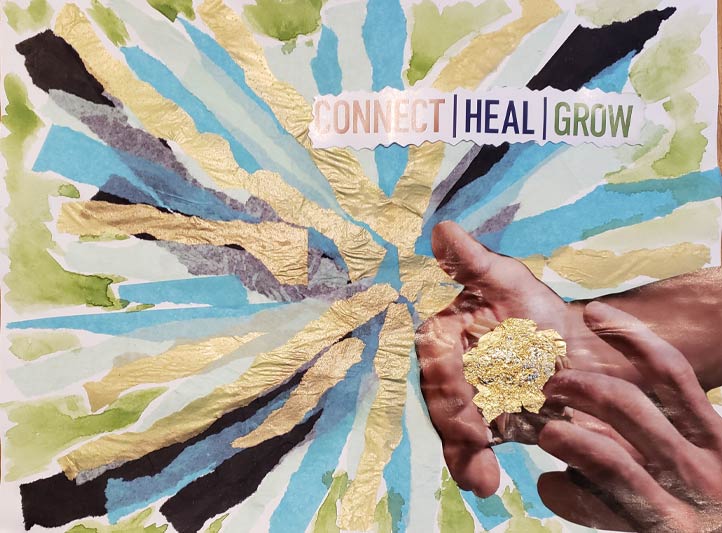 "After being witness to both joy and pain in such a close knit community, I felt compelled to process all that I had experienced throughout the weekend and created a tissue paper collage in response to the seminar title, Connect-Heal-Grow," explained Jennifer. "The colors in the collage utilize the idea of dark and light or grief and joy and how holding both can transform into hope–something I was honored to witness as I stood beside so many courageous survivors while they processed their own grief–encapsulating the true meaning of the title for the seminar. Stories of pain, suffering, healing, but most importantly hope were abound in the open art studio space."

While adult survivors had the opportunity to come together in various different ways, surviving children also had the opportunity to connect at the Good Grief Camp. Surviving children spent time learning guitar from Nashville singer songwriter and surviving sibling Brett Jones, hanging out with their military mentors, and spending time with one another in a safe space where they could express themselves alongside friends who have shared life experiences. 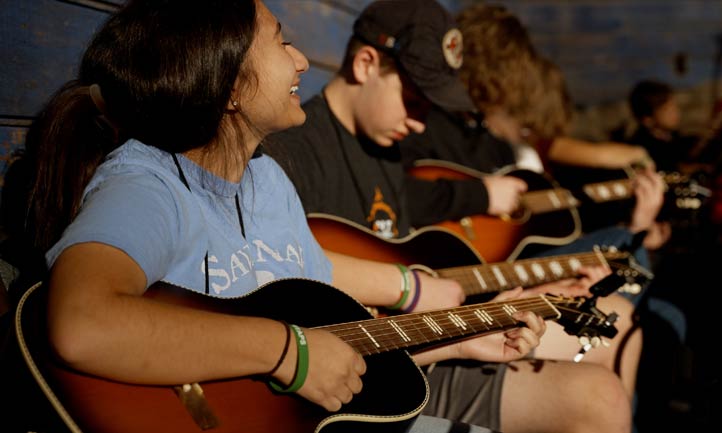 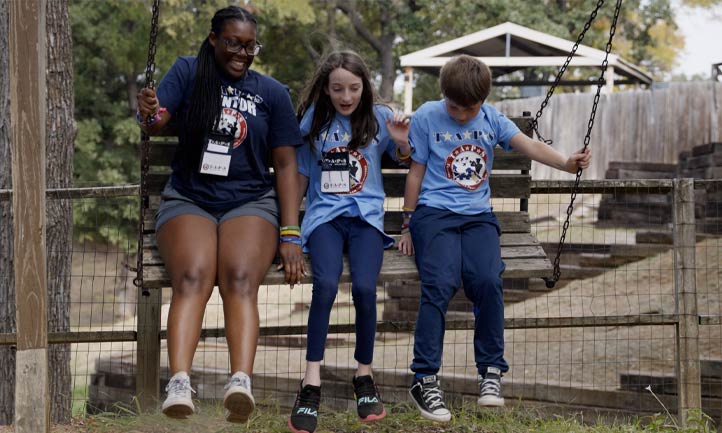 "I've been coming to TAPS for about three or four years, and it has helped me grieve and find connections that are the same as mine," said 14-year-old Jessica Nevins, surviving daughter of U.S. Navy PO1 Shaun Michael Nevins. "It's made me a different person and able to express my emotions. To be able to talk to other people about it, it helps a lot."

Created by survivors, for survivors, and with survivors in mind, in the nearly decade and a half the annual TAPS National Military Suicide Survivor Seminar and Good Grief Camp has taken place, it’s changed lives.

"We encourage people that if they just show up and trust us, we've got them," added Dr. Stumpf Patton. "We have created a weekend for survivors that we hope will be healing. Seeing the transformation that happens–from the first day they arrive, working through the weekend, then connecting with people–seeing that person who was really apprehensive about coming who is now talking with another person, we've actually seen transformation. We've seen healing in them. That's one of the highlights for me."

TAPS thanks all who supported the 14th Annual National Military Suicide Survivor Seminar and Good Grief Camp, especially our sponsors American Airlines, Boeing, Centene Charitable Foundation, H-E-B, LiUNA!, Magellan Federal, the NFL, New York Life, and Tres Grace Family Foundation. We are grateful for their generosity and continued support of the TAPS mission. This year’s seminar would not have been possible without them.

Interested in supporting the TAPS mission? Looking to volunteer or get involved?