At TAPS, we are privileged to witness the healing that so often comes with connections to our supportive resources, programming, and services. The postvention support offered by TAPS, especially, is critical in prevention efforts for all those impacted by suicide.

In 2017, recognizing a need to develop programming for those families struggling with trauma and grief from their loss of a military loved one by suicide, TAPS developed a partnership with Home Base Programs of Boston to offer an intensive clinical treatment program for families of the fallen (modeled after their program for service members and veterans). To date, more than 130 survivors, through 15 cohorts, have graduated from the program.

TAPS plays an integral role in the recruitment and referral of survivors to Home Base, while providing peer-based emotional support to those attending survivors before, during, after the two-week program. One of the most rewarding parts of this process is hearing from survivors about how the program helped transform their grief and offered new outlooks on their life ahead. 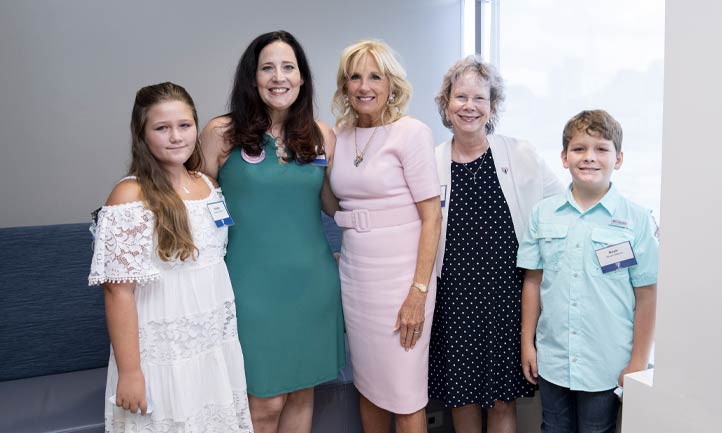 Katie Langer, surviving fiancé of U.S. Army Sgt. Jeremy Mittlesteadt, and her family, daughter Natalie, mother Pat, and son Noah pose for a photo with First Lady Dr. Jill Biden during her trip to the Home Base program in July 2022

With permission, I’m honored to share the personal reflections of one such experience as offered by Katie Langer, fiancé of Sgt. Jeremy Mittlesteadt, U.S Army:

I have wanted to give you an update since I returned from Home Base, but it has felt like I still haven’t had time to process it all! You were the very first person to mention Home Base to me after I sent that long email on a particularly rough day. When you first mentioned it and I read about the program on their webpage, I didn’t WANT to need it. I dismissed it as something I should be able to overcome on my own. I think deep down, I was also feeling guilty that I wasn’t fully deserving of a slot in a program like that since I was “just” a fiancé to Jeremy.

Admitting that I couldn’t do this on my own was a huge step for me. My world shattered when Jeremy died, and continued to pierce in the months that followed as I lost so much more than just my partner. I lost my ability to trust, my financial stability, my engagement ring, my sleep, so many of his personal things, friends; we are even losing our home...so much loss. By April, I could barely function, beyond showing up to work each day and trying to remember how to do my job. My job suffered, my kids suffered, my house suffered, my health suffered.

Going to Home Base was terrifying. I was afraid to leave my kids, but also knew that if I didn’t, I couldn’t be the mom I needed to be for them. I somehow had to figure out how to heal. Every single thing fell into place prior to leaving. All I had to do was show up and try.

From day one, the staff at Home Base was compassionate, kind, and committed to each person that walked through the door. The classes were both educational and insightful to my current place in life. The therapy was top notch. My therapist pushed me past the numbness I used as a shield and helped me face the true root of the night I lost Jeremy. Over and over again, I had to tell the story of that night, and even record it to listen to as homework. I was so MAD at first. It was too painful and I didn’t want to do it, but I was committed to overcoming it. My therapist never gave up on me. She encouraged me, sat with me in the muck, and reminded me of how strong I really am. And little by little, I began to heal.

Another major part of Home Base was the connections made with other suicide survivors. I walked into a room of eleven other strangers, and in them I found a family. Much like TAPS events, everyone there has experienced loss. These women, though- they knew my pain intimately. We could look each other in the eyes and understand without a single word exchanged. We found connection, support, and a place to be seen within our grief. There was no judgment or confusion. Only acceptance and love. Our group still connects everyday, either by text or phone calls or zoom. There is a familiarity that surpasses distance or time. It is truly a gift to have these women in my life.

After being home from Home Base for only a week, I received an email from the team asking me to return to their Boston clinic. First Lady Dr. Jill Biden was visiting the facility in July and they wondered if I would come to speak on behalf of the families who receive services from Home Base. I truly was stunned by even being invited. You see, from shortly after Jeremy’s death, I have prayed and asked God to somehow give me the strength to share his story—to open doors to raise awareness of the struggles of veterans in hopes that Jeremy’s death would not be in vain. I pray his story will help to save the lives of other men and women who are fighting the battle at home. I prayed for those open doors, and God opened the White House. He provided the opportunity to speak to a person who not only cares about our veterans, but who has a platform to truly evoke change. 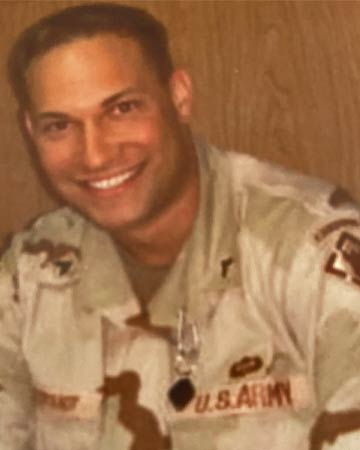 Dr. Biden heard Jeremy’s story, held his picture, and she heard how Home Base helped me to find hope again; she also heard how it saved the lives of the two veterans who also came to speak. I wore my TAPS photo button so that she and others would heed the reminder of Jeremy’s face. Jeremy’s story is so much more than his death. I pray that seeds were planted, and that Dr. Biden’s visit can help raise even more awareness and support for our veterans who need it so much.

When the visit was done, we closed our day at the USS Constitution. My kids and my mom were able to accompany me to Boston for this trip and I wanted to show them the ship. I was able to fire the ship’s cannon at sunset. The gunner’s call was my choice—“For Jeremy” echoed across the water just before I fired the cannon in his honor, followed by the playing of Taps. It was beautifully somber, but also somehow a fitting way to end our day. For every single thing done, every word spoken, every picture shared—it was for his memory and also for my healing.

If you’re still reading, I simply wanted to close with “Thank you!” It doesn’t seem like enough, but I am truly grateful for TAPS and for the support you have offered to me along this journey. I still have a long way to go in healing, but hope is present now, intermingled with the pain as we move forward. None of that would be possible without people like you and the others at TAPS.

So thank you from the bottom of my heart, 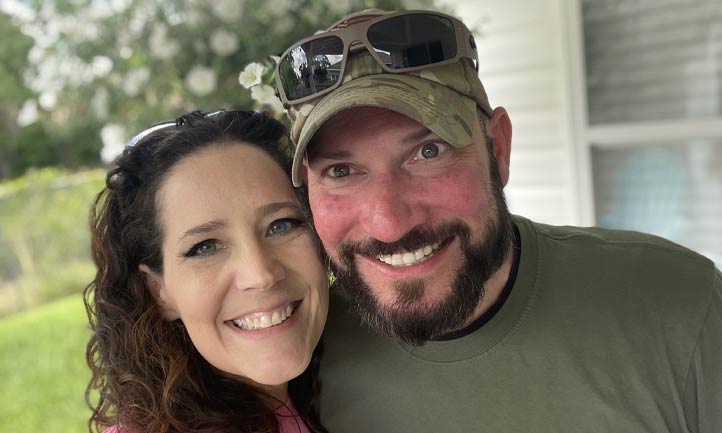 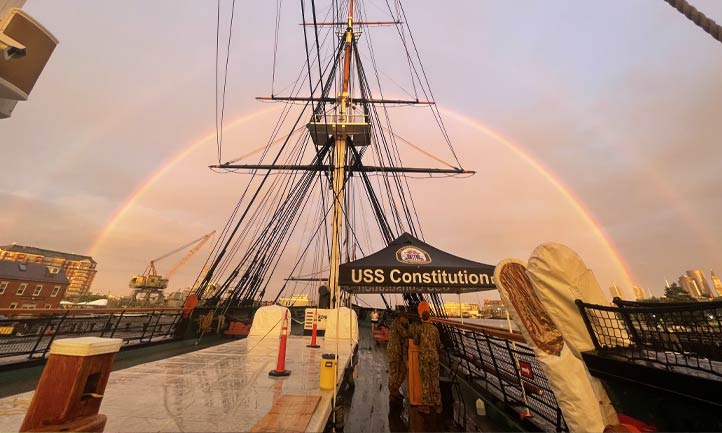 Rainbow over the USS Constitution 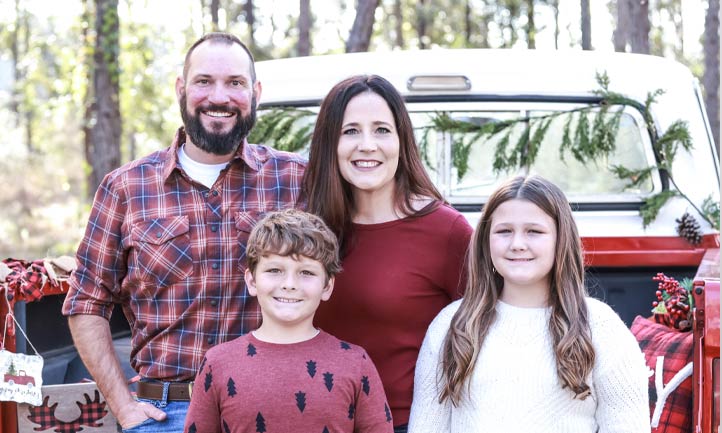 On behalf of myself, my colleagues at TAPS, and our generous donors and partners, and, of course, Home Base, we offer our heartfelt thanks to all of the courageous individuals like Katie, who trust in us in their time of sorrow, pain, and struggle. Thank you for allowing us to be part of your journey. We are deeply honored to travel alongside you on your hopeful pathway toward healing and growth.

To learn more about TAPS suicide prevention and postvention programs, please visit: www.TAPS.org/suicide. If you or a loved one is in need of additional support or could benefit from professional care such as counseling or a treatment program like Home Base, please contact our Community Based Care program at info@taps.org or call the 24/7 TAPS National Military Survivor Helpline at 800-959-8277.