I remember the day Brian came home from work and asked if we could talk. He had tossed around the idea of enlisting in the Army a few times in the 7 years we had already been married, and I had always shrugged it off as a daydream and nothing to be concerned with. But that evening in September 2006 was different. He was different. He had already looked into his Military Occupational Speciality (MOS) options. He had scheduled his Armed Services Vocational Aptitude Battery (ASVAB). He was serious. Over the next 2 months we met with the recruiter together as a family (I had SO MANY questions). We changed our diet so that he could shed a few pounds to qualify for Army weigh ins. We talked about how this very different lifestyle might impact our 8 month old son. And, on November 16, 2006, we kissed each other goodbye as he rode off to Military Entrance Processing Stations (MEPS) to leave for Basic Cadet Training (BCT).

Throughout our years as an Army family, we lived in different regions of our nation. We learned what the term “Household 6” really entailed. We learned new meanings for “resilience” and “family.” We cultivated relationships with our neighbors on post, with our Family Readiness Group (FRG), with the ladies that worked in the Child Development Center (CDC) and the local Morale, Welfare, and Recreation (MWR) Youth Sports Program. We made the most amazing friends.

When Brian died in May 2014, if felt like our entire foundation had been shaken. Losing him meant losing a connection with a community we had worked so hard to cultivate. It meant no longer being invited to FRG meetings or calling ourselves Household 6. It meant feeling out of place every time we drove onto post for a doctor’s appointment or Youth Sports event. It meant losing a piece of our identity.

Fast forward through those first few months of numbness and disbelief to October 2014. We were raw and broken and exhausted from grief. And we found ourselves traveling to Florida for a grief seminar and camp (I blame my wonderful Peer Mentor for motivating me to register for that weekend). I literally had to drag my boys onto the plane. That was Friday morning. By the closing dinner on Sunday evening, both of my boys asked if we could move in there and live with these TAPS people forever. They felt safe. 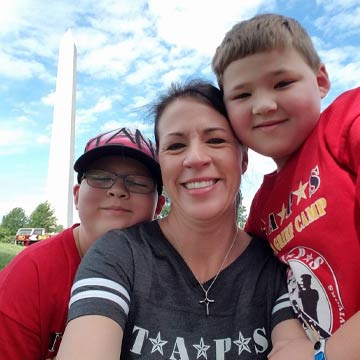 Ian, Westley, and Elizabeth Culp Sergent at the TAPS National Military Survivor Seminar and Good Grief Camp in May 2015 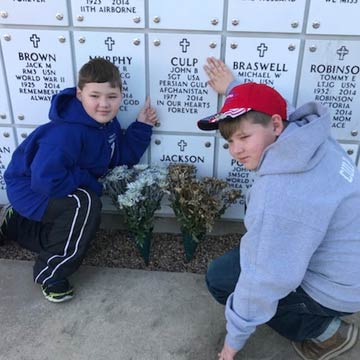 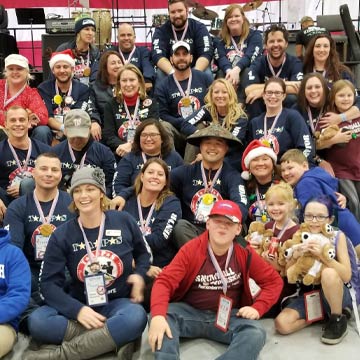 That weekend was the pivotal point in our grief journey. I remember walking through the resort that Saturday evening and seeing a group of Good Grief Campers in one of the pools. They were splashing and squealing and smiling. I watched for a few seconds and realized it was one of my sons’ groups. As I stood back and watched, I realized that, for the first time in months, my son was smiling. He was playing. He was being a kid. My son felt safe enough to have fun with other children. Later that evening, when I picked up my boys from Good Grief Camp, I spent a few minutes with both of their Military Mentors. My boys had arrived with thick, protective walls guarding their broken hearts. 24 hours later, I learned that they had shared some funny stories about their dad and talked a little about their feelings. Those thick, protective walls that felt so high the day before were a little thinner and shorter.

As we returned home and connected with different sources of support, we made it a priority to find ways of reconnecting with our military family. We joined a Bible study group through our local church full of active duty military families. We participated in events on post sponsored by the Survivor Outreach Services (SOS) Office. We attended TAPS seminars and Family Camp Outs. We realized that the military community truly hadn’t forgotten about us; but we just needed to find our new niche. It wasn’t the same as it was when Brian was alive. It couldn’t have been. But, with time and healing, it became less disappointing and more embracing. It became a safe place for us to enter into when we wanted. Yes, it was different. But it was ours. And it always will be. 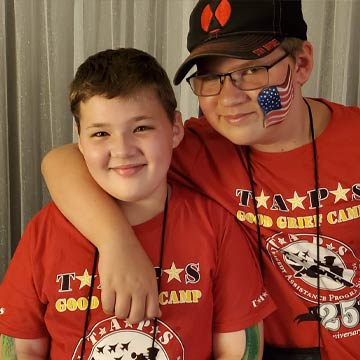 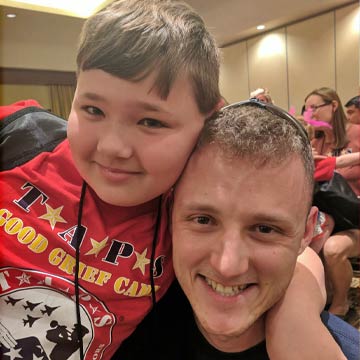 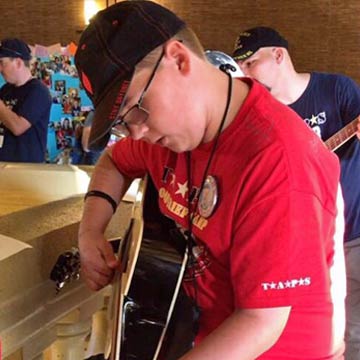 April is Month of the Military Child. Military children, who lose a parent, often suffer not only the grief of the loss of their loved one, but also the secondary loss that comes with no longer being part of a military community.