Purple Up! Day is a special observance during each April’s Month of the Military Child, where the public is asked to wear purple to show their support for the service and sacrifices made by our nation’s military children.

At TAPS, we support all those children who are grieving a military loss and honor their sacrifices each and every day. Our Legacy Mentors, surviving children who have become mentors to other grieving military kids, wear purple - to honor their loved one’s service, their own sacrifice and the sacrifices of those who they now mentor.

On this Purple Up! Day, we share stories of service and sacrifice from Legacy Mentors, in their own words. 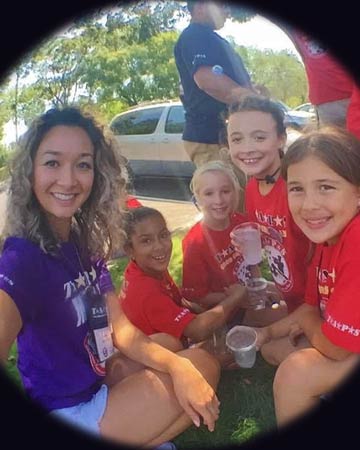 I decided I was ready to become a Legacy Mentor in 2014. It was a big deal for me because it was also my first time returning to TAPS since I was a teen at the Good Grief Camp years ago! I was nervous and barely remembered anyone. This was before the purple shirts existed, so I had no idea who was in the same boat as me.

When I chose the group I was going to be in for the National Military Survivor Seminar on Memorial Day Weekend, I realized the group leader was the same group leader I had when I was a kid! There were also other Legacy Mentors there who had been in the same group as me when I first attended TAPS as a young survivor. We were all grown up now, and ready to help the kids who were in the same position we had been in years ago.

That weekend in 2014 was one of the most important weekends of my life. It brought TAPS back into my life and I was able to get the courage to share with my mentees and peers their experiences of being a Gold Star child. After that weekend, I couldn’t wait to volunteer again, and found myself at almost every TAPS event throughout the next couple of years. As a survivor and Legacy Mentor, TAPS has given me so many gifts and opportunities, such as receiving the Ted Stevens Leadership Award in 2017, traveling and adventures with other survivors throughout the country, confidence to share my story, long lasting friendships, and a second family. 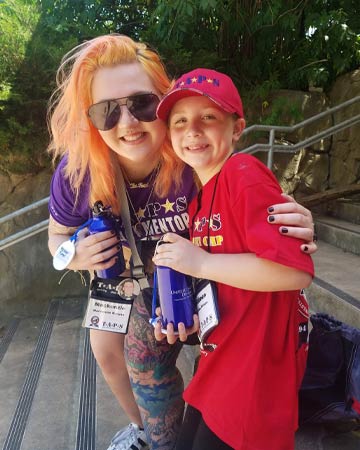 Growing up without the person I needed most was by far the most difficult thing I’ve ever done. I never knew how much I needed someone there who could understand the pain I was experiencing.

Volunteering for TAPS as a Legacy Mentor has given me that sense of belonging and pride in being that person for someone else. Having my mentees confide in me and being able to offer my unwavering love and support in return has been the most rewarding part of my journey. I’m not sure I have all the answers sometimes, but it’s not always needed; what is needed, however, is a pair of ears to listen and a shoulder to cry on. I’m proud to say I can be there.

I never knew how much of an impact I was actually making on my kiddos until I visited my first mentee’s school and her teacher remembered stories she had heard about me. Seeing my mentees grow up, continuing on their journey of their new normal, and walking alongside them has made me so proud of the people they are becoming. I’m so honored to be a part of their lives and to be able to continue to serve the community my father was a part of. 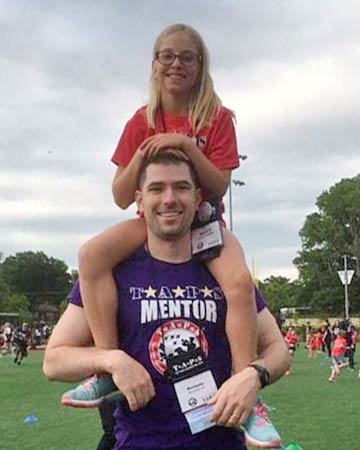 In the spring of 2017, there were a lot of changes in my life. My wife Samantha and I had just welcomed our first child, Victoria, changing our lives in wonderful ways we couldn't begin to comprehend. I had also just been promoted to Captain, another major career milestone; made all the more meaningful because it was the rank my father was when he passed away in an aviation accident in 1997.

It was with these events on my mind that I read an advertisement in the base paper asking for volunteers for an upcoming event with TAPS. I remembered the organization well. My family had stayed connected with TAPS over the years, since my younger brother and I were campers in the early days of Good Grief Camp; but, I had never returned as a volunteer Legacy Mentor. Reading the information, I knew that this was a calling to be there for a child walking their version of a path I had been on for twenty years. As soon as I was in the room one early April morning, and the kids came in to meet us, play, and talk about their loved ones, I knew I was back where I belonged.

Since then, I have done what every Military and Legacy Mentor does: given as much as they can to TAPS. I now have a second daughter, Elsie, and have since transferred to the U.S. Space Force. I am also incredibly honored to have been selected as the 2020-2021 Ted Stevens Leadership Award winner. I have so much to thank TAPS for, both in being there for me and my family after we lost my dad, and for giving me the opportunity to go back as a Legacy Mentor year after year. I have made so many amazing connections. While this has been a difficult year for all of us, I can't wait to get back together and hug all my TAPS family members again soon. 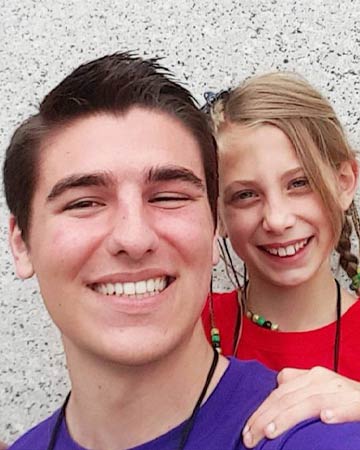 My first opportunity to attend a TAPS event as a Legacy Mentor was at the 2017 National Military Survivor Seminar and Good Grief Camp over Memorial Day Weekend. I had already attended previous TAPS events as a volunteer, helping staff with setup and assisting the team with other logistical tasks. I was beginning to feel like I had outgrown the Good Grief Camp, but somehow still wanted to give back to TAPS. When I was approached about becoming a Legacy Mentor, I remember feeling elated knowing I could continue working with the Good Grief Camp, making it as formative for the new generation of mentees as it had been for me. I jumped at the opportunity and have continued to volunteer as a Legacy Mentor ever since.

I love the Good Grief Camp because not only is it an opportunity to form lasting relationships with my peers who have also experienced loss; but, it has also taught me valuable tools that continue to serve me in my journey with grief after I leave Camp. I think this concept of sustainability, or teaching the ability for us to teach coping techniques to others, defines the “legacy” aspect of being the Legacy Mentor.

I look forward to working with mentees because I know their experience with TAPS and their grief journey does not end when they leave Camp. Whether they return to TAPS as a Legacy Mentor themselves or share their experiences at home with their friends and family, mentees will continue to grow and empower themselves and those around them. Even now this lesson continues to travel with me and, as I finish my first year of medical school, I am both excited and determined to integrate this powerful form of empowerment and partnership into my practice as a physician. 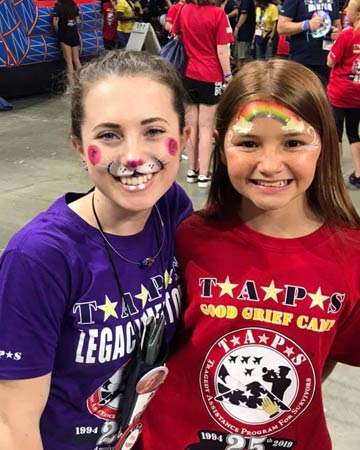 Serving as a Legacy Mentor is a gift. Sitting with a child in their grief, listening, and simply being present as they participate in a TAPS Good Grief Camp weekend is such a humbling and valuable experience.

In 2016, I became a Legacy Mentor because of the impact my mentors left on me after my brother, Marine Corps Sgt. Nicholas Pansini died by suicide in 2010. I was quiet in the Good Grief Camps after my brother’s death, but my mentors broke through my shell and softened the sting of traumatic loss.

I decided to become a mentor to reciprocate the compassionate care my mentors gave to me. Suicide loss at young age can feel so isolating; but just as my mentors were to me, I wanted to be a beacon of hope for children who know the similar ache that I do. Legacy Mentors are so important because we show our youngest survivors at TAPS that they too will be OK, and that Good Grief Camp is a welcome space for everything they are feeling after loss.

Often, I feel serving as a Legacy Mentor is one of the most meaningful things I have ever done. I am thankful to my mentees for trusting me with their stories and I hope to serve as a Legacy Mentor for a lifetime. Sometimes I think to myself that my brother, a giver who always lifted others up, would have loved mentoring at TAPS; so when I am there for my mentees, Nick is there for them too.

TAPS is grateful to our Legacy Mentors for their service to other surviving children - being there to support them and guide them down a path that they, too, have walked. If you are a surviving child and would like more information on becoming a mentor, visit our TAPS Legacy Mentor page.