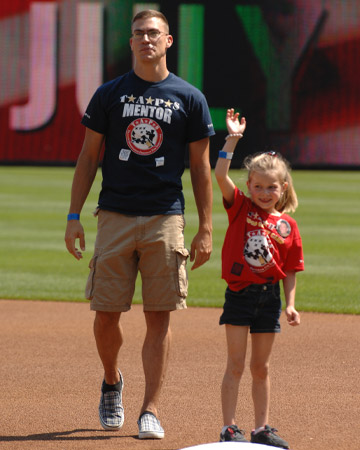 A TAPS surviving child and her TAPS Military Mentor with their take their position at the start of the Washington Nationals Game, TAPS survivors and their Fallen Heroes were honored on field as part of the Nationals Memorial Day Remembrances. (Nationals Staff Photographer)

I have never been to a baseball game without thinking of my late grandfather, who raised me after I lost my father at a young age. I like to think he’s watching too, arguing about balls and strikes and yelling when someone swings at the first pitch. That’s what he did at all of my softball games growing up, so why should Ryan Zimmerman be any different? For many, baseball has a way of bridging that gap, that loss, for us, connecting the then to the now. We live a thousand memories at once.

The relationship between the Washington Nationals and TAPS began in 2012, honoring TAPS children and their military mentors before the game. On the surface, it may have looked like just a moment in pregame ceremonies – show up late from the Metro and you may have missed it. But for those of us who have been able to experience what teams4taps does, we know it’s so much more than that.

The weight of the grief, and how it affects us, changes every day, and what we need from the game changes with it. A TAPS family may be attending a baseball game to honor their loved one. He or she may have been a big baseball fan, or they used to go to the games together. Maybe their son or daughter plays. Maybe they want to connect with families who understand what they are going through. Baseball can be a time to remember, or to escape, or to layer new memories onto old, like tracing paper. So that one-minute fan-facing recognition is just the beginning. It’s really about being what a family needs on that day, in that moment.

In 2018, we pitched the idea of a more formal “Families of Valor” program, with TAPS families meeting with a player before the game. Not every player would be a fit. We have plenty of well-meaning, wonderful guys who I would not put in that room an hour before first pitch. I’m thankful to our former players Matt Wieters, Sean Doolittle, Howie Kendrick, and Adam Eaton for all embracing the opportunity throughout the years. They are forever changed by knowing you, and sharing those moments with you.

When TAPS asked me to write this, one question they wanted me address was, “Why do you do it?” Simply put, because we can, and because we should. Because it’s more than a game to so many people. Because no one has ever sat in that room, listened to your stories, and come away unaffected. I have had interns ask if they could wear sunglasses indoors. (Answer: No)

Sometimes appreciation for the military can seem impersonal, and I’m fortunate to work for a team that attempts to go deeper. The military families – especially the TAPS families – who we work with become part of who we are as an organization, part of the Washington Nationals family. This is why, at 12:30 at night, minutes after winning the World Series, I was texting Diana Hosford from the field in Houston to coordinate plans for TAPS to walk in the World Series parade. It was the biggest moment in our history, and we wanted our TAPS family to be a part of it, celebrating the high alongside us. 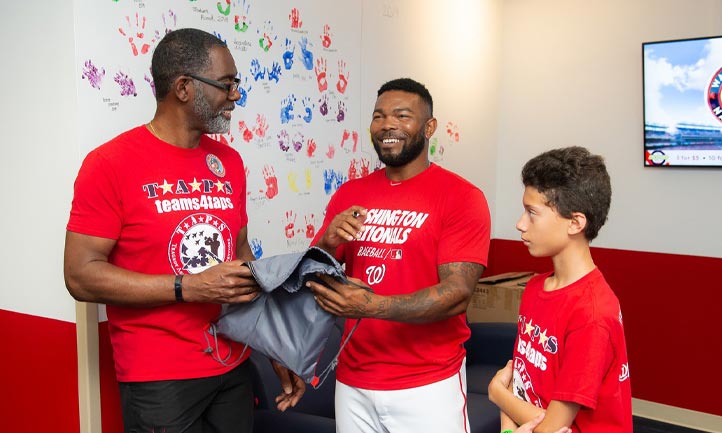 The Nationals' Howie Kendrick meets with TAPS Families before a game as part of the Washington Nationals' "Families of Valor" program. (Nationals Staff Photographer) 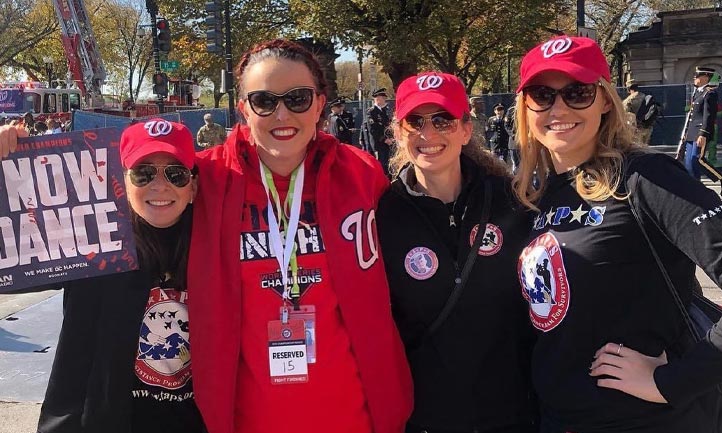 The author, Nicole Murray (in red), with the TAPS sports & entertainment team at the Nationals' World Series Championship Parade in November 2019. TAPS was invited to march in the parade as a community partner. (TAPS Staff Photographer)

And that’s what sport, what baseball, gives us. A place to share the highs and ease the pain of the lows. We have seen people turn to this great game for a source of comfort and healing. For something to rally around, and connect them with others.  As we open the gates for a new season of baseball, we hope that we can be that solace for you, and those you love.

Nicole Murray is the Director of Community Relations for the Washington Nationals, focusing on the team’s military outreach. She is a Space Force spouse with two young boys - a postseason baby and an All-Star Game baby. This is her twelfth season with the team.