Editor's Note: As we move into the month of May, we will be sharing a series of stories from survivors. To begin the month, surviving spouse Coleen Bowman shares her memories and thoughts on this sacred time, memories of the past, reflection on the present, and new traditions for the future. We invite you to share your Memorial Day thoughts or memories by sending your stories to editor@taps.org and also share on social media by tagging us (@taps.org) and use the hashtags #honorthem and #morethanmemorialday.

For most, Memorial Day is a day of remembrance and solace. It is for me as well, but it is also, in many ways, so much more.

Every year, as this date approaches, I get “excited” with the anticipation of my HERO receiving his flag in Section 60 at Arlington National Cemetery. For me, Memorial Day weekend is my favorite weekend of the year. I know that on that weekend, everyone who ever knew my husband, Sgt. Maj. Rob Bowman, is remembering him and honoring his life and service. For many years before Rob passed away from a combat related illness, we would remember and celebrate the lives and service of many of our friends we had lost to the wars in Iraq and Afghanistan. We would have a BBQ, invite our friends over, most of whom had losses in common with Rob and myself, and we would make a toast to these heroes. We would reminisce about the good times we all had over the years together, share funny stories, and feel thankful that these heroes had crossed our paths. 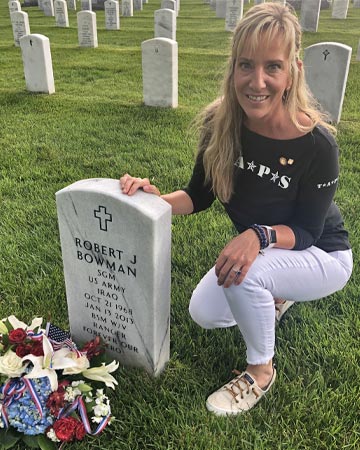 For me, Memorial Day looks very different now. On the Thursday before Memorial Day, I am like a child on Christmas Eve, but I am not waiting for daylight to see what is in my stocking. I am eagerly awaiting the 3d Infantry. The 3d U.S. Infantry, traditionally known as "The Old Guard," is the oldest active-duty infantry unit in the Army, serving our nation since 1784. The Old Guard is the Army's official ceremonial unit and escort to the president, and it also provides security for Washington, D.C., in times of national emergency or civil disturbance. They are the “other heroes” that walk through the sea of white headstones and meticulously place a flag at each headstone. Many of them take the time to stop and read the headstone, some getting emotional when they read the name of their “battle buddy.” I usually stop the Old Guard soldier who places Rob’s flag and introduce myself. I share one or two things about Rob, I ask their name, and maybe where they are from. One year, the soldier’s response was “New York” so I shared with him that Rob was a Yankees fan.

Yes, this is my favorite day of the year. After having experienced so much loss, even before Rob’s death, and the endless years of a war that has spanned two decades and four administrations, I have chosen to find the joy that I have in my life for having known such heroes that so selflessly chose to serve a cause greater than themselves.

Eight years after the loss of my husband, I am continuing a tradition that we once shared together. I will celebrate these heroes that were once such a big part of my life, I will say a toast, and speak their names, and I will remember all the wonderful times we shared together. I will become nostalgic. Every opportunity I have to share about Rob and his service and sacrifice on this weekend, I do. I am able to share about the advocacy work I do now, in honor of not only Rob, but hundreds of thousands of veterans. I will gather with friends, many who never had the honor of meeting Rob or the soldiers that he served with that have passed away. When they leave, they usually say “Wow, I never met Rob, but the way you speak about him and his life, I feel like I know him. Thank you for sharing his story.” It is an opportunity for me to make sure that people have more of an understanding of the difference between Memorial Day and Veteran’s Day.

I am always so excited for the parades on Memorial Day and watching all the people honor Rob on this day. While I know that they are honoring all who have served and died, I like to think that the parades are for him. I love seeing all the flags that are displayed throughout the cities, knowing that this is the flag that my husband bravely fought for on some of the bloodiest battlefields in the early years of the war in Iraq, and ultimately draped his remains on that cool April afternoon in Arlington National Cemetery. It is the one weekend during the year that I can feel our nation come together and honor our nation's fallen heroes.

I find comfort in knowing that on Memorial Day, complete strangers will walk through the hallowed grounds of Section 60, and see Rob’s name etched in the white headstone. They may stop and wonder who he was, they may say his name. I remember the night my husband died, one of my first thoughts was, I will NEVER let this world forget this warrior, this hero — my husband, the father to our beautiful daughters. You don’t just forget someone like him. I know that his name will be spoken many times on Memorial Day weekend. “They say you die twice, the first time when you take your last breath, and a second time a bit later on when someone speaks your name for the last time.” (Bansky) Memorial Day is the day that continues to keep Rob’s legacy alive, I find peace and pride in this. I am proud to have been the wife to such a man, and the friend to so many other heroes who made me a better person because for a moment in time, they were a part of my life.

I will have a quiet moment as the weekend draws to a close. Tears will flow as I am reminded it will be another year, before so many will be remembering my hero again. Until then, I remember every day, I remember the sacrifice Rob made, and so many others that came before him, and the many that will go after him. 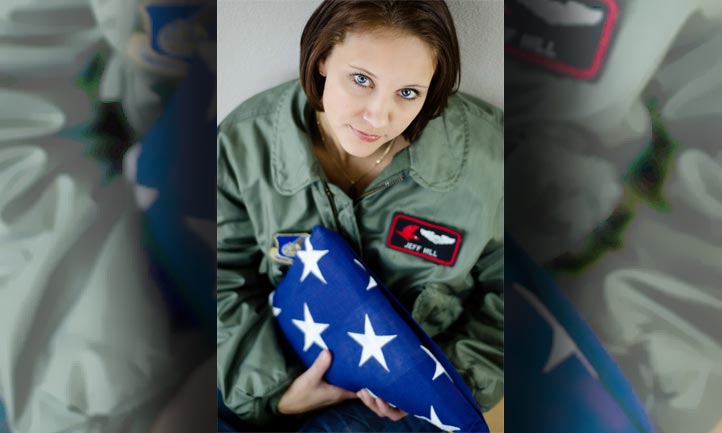 Survivor and veteran, Rachael Hill shares her journey to making Memorial Day about remembering those veterans who have given their lives.