It was the question my dad always asked me when I was really sick. The kind of sick he could tell just by the look of me — a crumpled up little lump of ginger lethargy on the couch with my woobie — was not just the ‘7 to 2 get out of school flu’ I sometimes came down with. 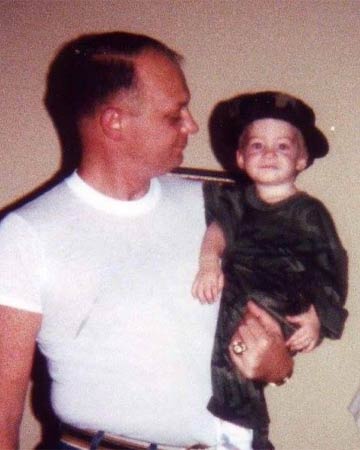 It came in a tone of deep sincerity and earnest determination to fix it however best he could. His head poking around the corner or his 6’2 frame tilted over you. His hands formed a pyramid of finger-tip touching prayer in front of his chest, as if emphasizing his desire to do anything to help. He tended to leave the doctoring and nursing to my mother. She was afterall the daughter of a doctor and a nurse. She knew either what to do or at least who to ask. So she managed appointments, ointments, treatments, and vomit.

My dad was a soldier. Mission ready, solution oriented, battle buddy loyal. If I needed to go to the hospital, he’d take me and stay with me; usually distracting me with humor. If a McDonald’s cheeseburger was the first thing that sounded like I could stomach, he’d go get it. And when the one thing I said would make everything better on a Sunday (when most stores were closed) during the Chickenpox Outbreak of 1982 was the Pac-Man game, he immediately set off to find it, returning with it two hours later. I was seven years old when I got the chicken pox. Over 30 years later I still remember the look of relief on my dad’s face when he rushed back in to give me that game; like he just found my cure. Maybe in a way he had.

There was no actual cure for my dad’s respiratory cancer caused by exposure to Agent Orange. Toxic exposures in the military have unfortunately been experienced by multiple generations of service members over the years — often the unintended consequence of well-intentioned tactics originally meant to enhance readiness and/or warfighter advantage.  While the means of exposure differ from the veterans of Iraq, Afghanistan, and Vietnam, illnesses stemming from these exposures are ultimately caused by the same source — a group of highly toxic chemical compounds called dioxins. Dioxins are not intentionally produced. Instead, they are the by-product pollutants of industrial processes (e.g. trash pits) or intentionally produced mixtures (e.g. herbicides). They can have devastating and long-lasting impacts on humans and the environment.

Agent Orange is one of those terms in our collective use for so long, some Americans may not understand its inference. If you are among the families like mine who’ve endured all that name really infers, you are not alone in your pain and grief. Though your loved one returned home from Southeast Asia, they carried with them something that still had the potential to cut their lives inequitably short. To give our troops a tactical edge in the dense jungles of Vietnam and Southeast Asia, the U.S military used chemical herbicides to destroy the forests and crops which provided cover and food for the enemy. Agent Orange — it’s name comes quite simply from the color of the barrel band which contained it — was the most widely used of these herbicides and the most potent. So potent, that more than 45 years after the fall of Saigon, evidence of Agent Orange remains in the soils and waters of Vietnam. Questions regarding Agent Orange’s impacts on service members arose in the years immediately following the war and persist today as an increasing number of veterans and their families began to report a range of afflictions. 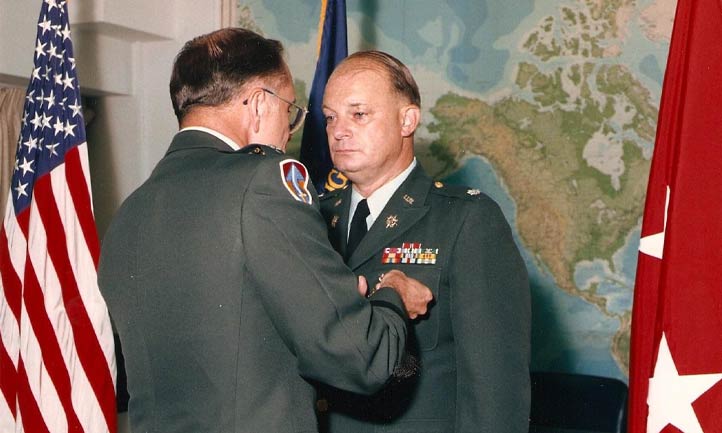 My dad was never among those service members who questioned its use or expressed concerns for impacts on his health. He was hardly ever sick or missed a day of work due to illness. It was extremely rare for him to even have a headache. Even once diagnosed with terminal cancer, my dad did not focus a lot on the cause so much as he did on putting his energy into staying alive and beating the odds. Statistically speaking, he did just that. At the time of my dad’s diagnosis, life expectancy for stage 4 lung cancer was generally less than three months and no hope of remission. My dad pursued his options doggedly and was able to kick his cancer into a short remission. He lived for 10 months.

My dad had a solid caregiving community around him. My mom, obviously. His six warrior sisters. Incredible neighbors, extended family and friends, and the fellowship of church members. We were fortunate much of this same network companioned us through our grief as well. I would wish this level of support for anyone going through a similar experience as I know too how isolating enduring much of it alone can feel. There were some aspects of my dad’s ongoing treatment and care though he simply did not want his kids doing. We had to respect that and afford him his dignity. It was still hard for him to even allow his sisters to do some of this but decided some things were necessary.  He didn’t need the doctoring and nursing from either my brother or myself as a result.  Though, like my mother, I am excellent with managing appointments, ointments, and treatments. Yes, you’re not wrong. I omitted one. My dad’s first chemotherapy round I was the one who vomited actually. I was just that in tune with him.

I spent those 10 months largely mirroring my dad’s style of caregiving. If he needed to go somewhere, I’d drive him. When he got weird cravings and only certain foods sounded good, I’d go get that food for him — cheesesteak sandwiches, Popeye’s mashed potatoes, Lindt white chocolate truffles. And when he developed a fondness for a particular country music artist whose name he kept struggling to remember because the cancer had spread to his brain, I went and got the greatest hits CD for him to listen to on his Discman and never tired of answering the same question:  “Hey, CG” What’s that K guy’s name again I like?”

In the last month of my dad’s life he was sleeping in a hospital bed set up in our dining room on the first floor. Directly below my bedroom. Through the floor vent my dad’s lilting baritone would drift up to me, accompanying aforementioned K guy:

When I close my eyes
You're all I see
In the dark of night
You're in my dreams.

I’ve always said my dad had a soldier’s death. There’s no hyperbole to it. My father was a war veteran who did not die in war. Yet, I watched him fight and die applying the same warrior ethos had he been on the battlefield still; a depthless courage and dauntless strength always at his core. My mother would often comment how no matter what my dad never complained about pain. His face seldom showed it either. Even when you knew he had to be in increasing amounts of discomfort. I know my dad well. (Present tense. He’s still my dad.) He wasn’t trying to be some kind of saint or exhibit unrealistic superhuman attributes. In that much pain he was simply disassociating from it. Going quiet and disengaging from it. It’s a practice many of his ilk, military special operations, use. It is quite effective too if you can get your brain there. When he took his final breaths on Saint Patrick’s Day it was an emotionally painful though beautifully stoic culmination of a heroic fight. My father was a war veteran who did not die in war. He died because of a war and in the same brave, dignified manner in which I imagine he was prepared to face death should it have requisitioned him in Cambodia instead of Fairfax.

My family began the process immediately of filing a claim with Veterans Affairs for dad’s service connected cancer and subsequent death. This resulted in additional survivor benefits for both my mother and brother until he aged out as a dependent. We again were fortunate to be in a position where though dad was retired, both he and I were working as civilian contractors at the Pentagon and thus maintained some awareness of current benefits and resources. I happened to be the one who knew to pursue the claim for my family.

How I knew goes back to a happenstance moment of serendipity when I checked out a library book at age 12 about Admiral Elmo Zumwalt. A read that led to me asking the question, “Dad. Should we be concerned about Agent Orange?” Now, if only my dad had been either an alarmist or privileged to share classified information with a middle schooler the story might have ended differently. Who knows. But in 1987 when I was first learning all about the substance of the substance, my dad seemed not concerned in the least. In 2005 when I walked into his hospital room after the test results confirmed his cancer I asked “Dad. Is this Agent Orange?” For the first time in thirty years he acknowledged the plausibility.

He was a soldier. He understood why it was used. He did not display any resentment about it being used. Its use may be a reason he even came home alive. One of the few wartime details we have of our dad is that he spent some time in trees watching for the Khmer Rouge. In an occasional moment however, caught in a thought while fighting a new enemy, was the glimpse of an underlying resentment toward the bureaucracy which delayed him realizing perhaps this toxic threat even existed at all. Dad’s cancer was a very slow growth kind. The type that can go unnoticed and asymptomatic for as much as 10 years even. When the Veterans and Defense Departments did a lot of slow reveals over three decades of where and when Agent Orange was used that negatively impacted millions of veterans equating that information with what and if they should be concerned. 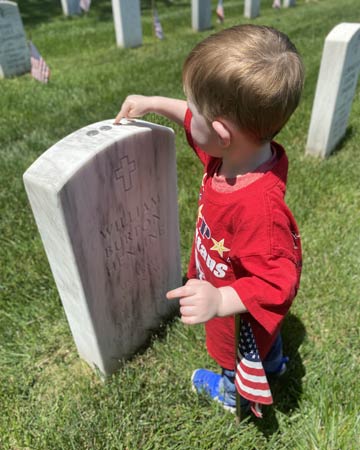 As late as 1999 DoD admitted to using Agent Orange in Korea the same year my dad was stationed there. Information from the VA came in bulletins in the mail then and was not constantly alerted in front of your face on social media or 24-hour news stations. I don’t think my dad ever even knew about the Korea update. I stumbled upon it in a news search after he died. I remember being so angry I kicked a file cabinet at work and yelling, “Can you at least give them a chance!”  My dad died in 2005. What a huge difference it might have made for him in the staging of his cancer if there’d been more proactive outreach, quicker revealing of where and when the herbicide was used — to include informing those who worked classified missions if it affected their area of operations.

Many of you may come to this moment of caregiver or survivor at a time when the next phase of your family’s life was on the horizon and when your loved one’s service has long been in the rearview mirror. You therefore might feel disconnected from military and veteran support services and unsure where to begin to look for resources.  Rest assured though, you do not have to navigate this all by yourself.  Perhaps, like me you may have already pursued a claim but wish to find further agency over Agent Orange by honoring your hero with us. TAPS is here for you and we are humbled to share this journey with you.

So, caregiver? Can we get you anything? 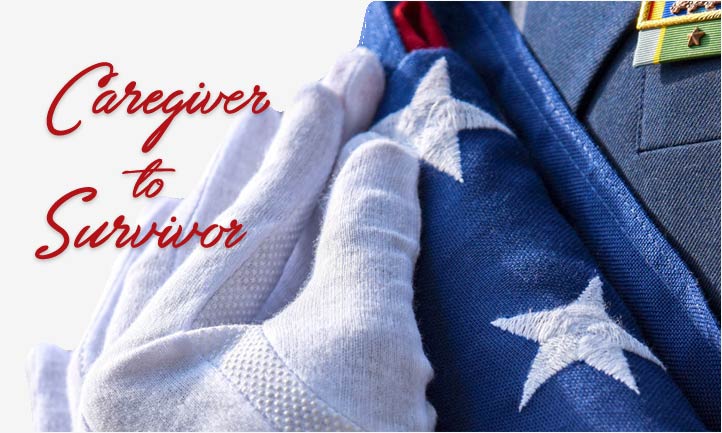 If you have lost a military loved one after having been a caregiver, we understand, are advocating on your behalf and are here to support you with comfort, care and resources. Visit our Caregiver to Survivor Program page to learn about the work we are doing.