On September 11, 2001, the TAPS Families watched along with the rest of the world as the unthinkable tragedy unfolded. As military survivors, there was an immediate realization that the mission of the American Armed Forces would change profoundly after that day.

Bonnie Carroll, TAPS President and Founder, was serving as an Air Force Reserve Officer assigned to the Pentagon, and on 9/11 was mobilized to active duty to report to the Office of National Security and Emergency Preparedness. Their leadership recognized the critical role TAPS could play in caring for the families of those that had died, so Bonnie was immediately detailed to the Pentagon Family Assistance Center being established at the Sheraton in Arlington, Virginia, just blocks away from the Pentagon.

Families were arriving there and gathering to pray for a miracle amidst the rubble - in hopes their loved ones had somehow survived - that they were elsewhere at a hospital being treated or had not been in the building that morning. 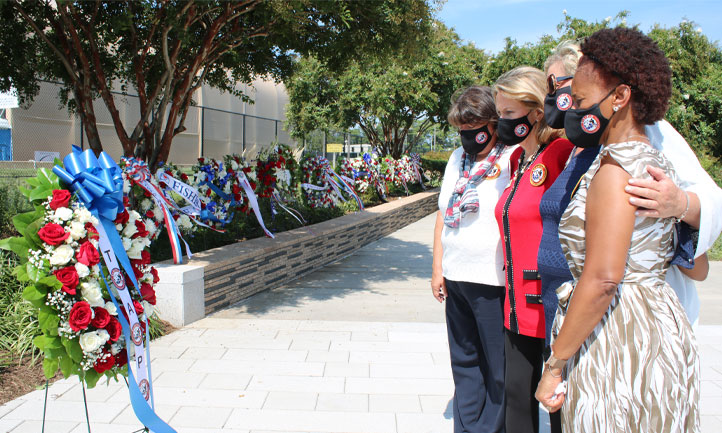 The FBI was gathering forensic evidence from family members, trying to make DNA connections and reunite loved ones. There was hope of a miracle; and TAPS stood silently by as witness, praying with families for that miracle. As the FBI finished their work and left the Center, TAPS quietly and reverently moved into that same space to meet families wherever they were in their feelings – ranging from shock to disbelief to anger, and sometimes, just exhaustion.

TAPS Peer Mentors were mobilized from around the country to come to Arlington and volunteer their time to bring comfort and support to the newly grieving families.

The only other non-governmental organization in the Center, the Red Cross, asked TAPS to provide training in grief support; and they, in turn, provided TAPS volunteers with training in their response protocols.

One week after the attack, TAPS Peer Mentors and surviving families visited the site of the impact at the Pentagon. For those who needed to see the scale of the devastation for themselves and gain answers to their questions, it was healing. This was now sacred ground where their loved ones had died. Prayers were said and TAPS held on tight, especially to those who were there alone. It all became more real that day.

Family briefings were held daily and led by Lieutenant General John Van Alstyne, who began each session by reminding the more than 500 family members gathered that he was “not a public affairs officer, he was an infantry officer.” His honesty was a relief, his strength was a comfort, and his compassion was beyond measure.

These briefings were emotional, powerful, and often devastating. After Lieutenant General Van Alstyne would give the updates and read the names of those newly identified in the Pentagon, he would ask for a moment of silence. He reminded everyone to simply breathe - to hold onto each other, and remember, in his words, that “no matter their job, whether a General or a janitor, [their] loved one was on duty for America at the moment of their death.”

He would often then invite all of the families to stand together, join hands and sing “God Bless America” or the National Anthem, uniting as one in honor of their loved ones’ life and service. Then, he would open up for questions. Quite often, there was silence. Very gently, but firmly, he would press for the “tough questions” though, and they would come. They were questions that only one person might ask, but the answers were often things everyone there needed to know. Lieutenant General Van Alstyne very quickly recognized the critical role TAPS played in supporting families at the Center, and he relied on the Peer Mentors to wrap their arms around those who were struggling.

On the last day that the Pentagon Family Assistance Center was open, six weeks after 9/11, Lieutenant General Van Alstyne gave his final briefing. He told the families: “We don’t know what lies ahead, but do know that we are going to war and our military will need every resource to defeat the enemy that has attacked our homeland. We can’t promise you that we will be there for you as we have been over these past weeks. Look around the room at the red TAPS shirts - they are the ones who will be there for you, now and always.” And TAPS has been there for twenty years. 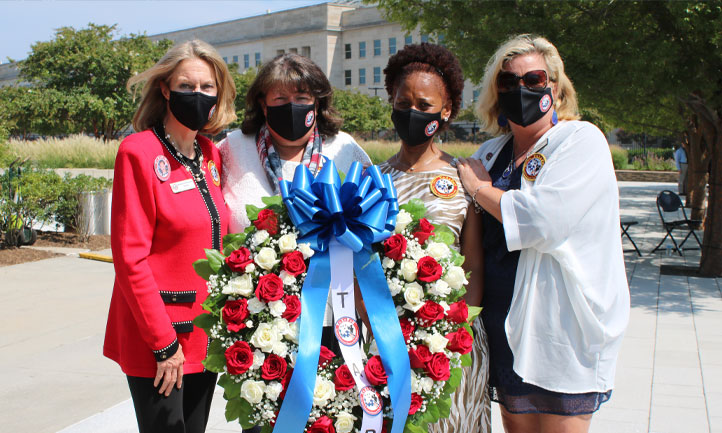 Representing TAPS at the special Pentagon observance are: (left to right) Bonnie Carroll, TAPS President and Founder; Lisa Dolan, Surviving spouse of Captain Robert "Bob" Dolan, U.S. Navy who was killed at the Pentagon on 9/11; Colonel Marilyn Wills, U.S. Army (Ret.), Pentagon survivor and recipient of the Purple Heart and Soldier's Medal for her actions that saved lives on 9/11 and past Good Grief Camp mentor; Marie Campbell, TAPS Special Advisor.

The bonding that took place at the Pentagon Family Assistance Center created lifelong friendships - the kind that only exist when born out of terrible tragedy and shared grief.

The list is long of those who came to TAPS in the early days of the Pentagon Family Assistance Center and who found a home in the TAPS family. The bonds formed during those six weeks remain strong. That’s what grief does; it rewrites your address book and brings people into your life who understand and are there for you, just when you need them most.

Those who lost loved ones on September 11, 2001, have truly become the living legacies of American service and sacrifice, and are now mentoring a new generation of TAPS survivors. The love of those who died in the Pentagon on that fateful day truly lives on.

This September 11th and every day, TAPS is here to support all those grieving the loss of a military loved one.