After I lost my son, Lance Corporal Carl Burgdorf, I started rebuilding my life. 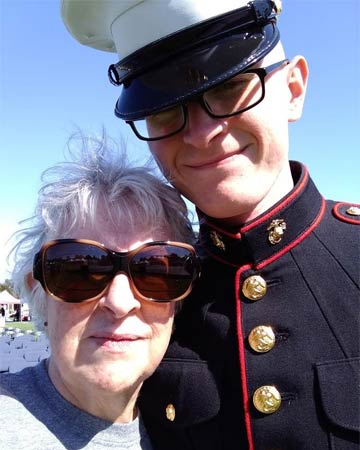 Lydia and her son Carl in Monterey, California (May, 2019). Photo courtesy of Lydia Burgdorf.

It was important for me to be around other people, so I went back to work. I went to the gym four or five days a week to lift weights and work out my frustrations. I had dinner with friends twice a week in their homes. On Saturdays, I was frequently at a local community center. I stopped for coffee at a local Starbucks on Sunday mornings before church; I knew the names of all of the baristas. Sundays after church, you could usually find me at a local yarn store knitting.

In November, I reached out to TAPS and was matched with a Peer Mentor. She helped me get through the rough days, the holidays and birthdays that break your heart again. After the first of the year, she asked if I had attended any of the online chats and suggested I look into them.

In January, I participated in the women's video chat and was encouraged to go to the regional seminar in Dallas, Texas. I then began to participate in the chat for survivors of suicide loss. It helped so much to be able to talk to other people who understood what it was to lose a child or someone you love to suicide.

Then my world turned upside down again with the spread of the coronavirus. Suddenly all of the carefully curated parts of my life that made me feel normal were gone. Restaurants were closed, takeout only. I started working from home, walking across the living room was my new commute. The gym was closed, no more weight-lifting for me. I couldn't have dinner with friends; couldn't risk being around people I didn't live with. The community center was closed, and my local yarn shop closed for the duration. The only things that were still familiar were my weekly phone call with my Peer Mentor and TAPS chats.

TAPS Online Communitychats became the primary way I had to connect with other people, to have conversations, to hear voices and see faces. I'm so grateful that there is always someone on the chat who is willing to talk about food or the weather or anything but the virus. TAPS chats are different from social media because everyone on the chat has lost someone precious to them, someone they loved deeply. They understand the catch in your voice, the lump in your throat, the tears in the corner of your eye.

‘So Glad TAPS Has Been Here’

At the end of March, I lost my father-in-law. He was 84 and his body just gave out. I couldn't be there when he passed, it just wasn't wise for me to travel in these uncertain times. But I was on a TAPS chat that night to be with my TAPS family. I shared a picture of him. We celebrated a man who had served in the Navy during the Korean War; a man whose son had served in the Air Force and who had three grandsons, including my son, who also served in the military.

It probably sounds a little trite to say that I wouldn't be coping with our new normal as well as I am without TAPS, but it's true. I'm so glad TAPS has been here for me.