The Team TAPS Virtual Fundraiser Campaign is going through December 31.

The pandemic hasn’t stopped us from lacing up and running, jumping on our bikes, or hiking a trail as we honor our fallen military and raise funds to support the vital programs of TAPS. 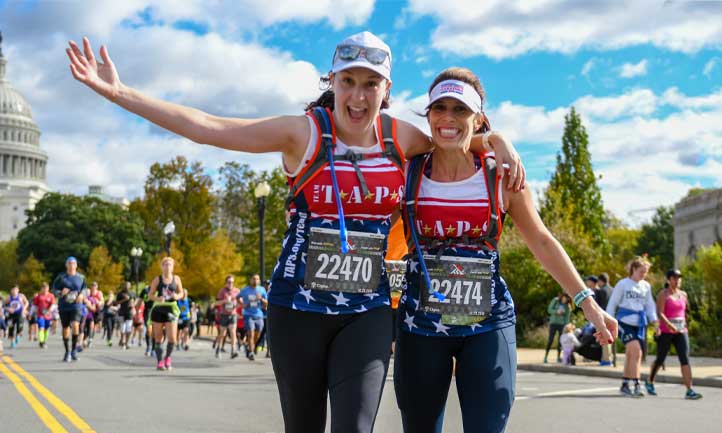 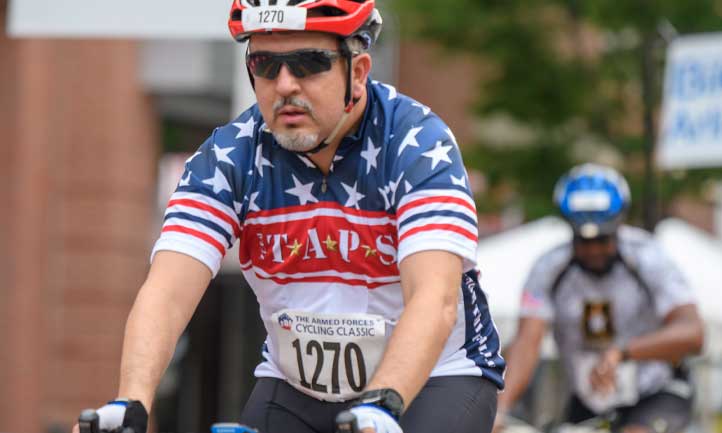 You can still participate in our virtual campaign or make a resolution to join Team TAPS in the new year.

Here’s how you can be a part of this amazing group of people who take their love of fitness or just getting in the outdoors and channel it into an action for good:

1) You can choose to do your own personal activity in honor of your fallen hero or register and pay for your entry at the event of your choice's website. This time of year, there are many great holiday runs, such as Jingle Bell Jogs.

2) Create your TAPS fundraising website. There is not a registration fee to register with TAPS. (All ages welcome!) Each Team TAPS participant will receive:

Young or young at heart, athlete or weekend warrior – everyone can participate with Team TAPS. Whether you choose to participate in an organized virtual race, run or walk; complete 20 miles in observance of Team TAPS 20th anniversary; bike, swim, dance or do your own distance, we welcome you to join the FUN-raising and make a difference!

Let’s all work together to close out the 20th anniversary year of Team TAPS while honoring the lives of our fallen heroes—and supporting the families who have been left behind!

From participants in this year's virtual event:

"Team JRC is completing 20 miles on their own as runners, bikers, walkers, or swimmers. JRC contributes to this program each year because of the tremendous support it provides to families who have been impacted by a death in the military. Although the in-person event is cancelled this year, I want you to remember why we run each year. We run to honor our fallen heroes. We run to remember the sacrifice experienced by men, women, and children all over our country. We run because it's hard. The physical act of running is our way of paying homage to the blessing, privilege, and opportunity afforded to us as citizens living in The United States of America. Every year we commit to lacing up our shoes, letting our feet brace the pavement, and forcing our muscles to put in the work as we pay tribute to the men and women in uniform protecting this great nation. That is why we run for TAPS every year. We run because it's hard, we run to remember, and we run for hope.
— Tony Jimenez, Team JRC (JRC Integrated Systems, Inc.)

"Having been involved with the very first Marine Corps Marathon at age 38 while on active duty at Headquarters, Marine Corps, it was a distinct pleasure to continue my involvement 45 years later doing the MCM10K once again with my trusted "Wingman" and TAPS family member, Marie Campbell. As team members, although this year was different, we were determined to encourage each other and serve our mission. We would go the virtual distance to not only complete the MCM 10K honoring our nation's fallen heroes, but also work together raising awareness and funds for TAPS. As of now, we have raised, $4,775, and we will continue to reach out until the end of the year."
— Buzz Hefti
"I wasn’t sure what the response would be for fundraising this year with all of the challenges everyone had been facing but I was blown away at the generosity of everyone. From my late husband’s classmates at the Naval Academy, to my civilian friends and family, the mission of TAPS really spoke to them and my fundraising for the Marine Corps Marathon was a huge success! Running my first marathon virtually was a challenge but my friends, family and neighbors came out along the course. They provided me that extra motivation to keep going and finish my first marathon in memory of my late husband!"
— Jennifer Hanson, surviving spouse of LCDR Keith Hanson, U.S. Navy

Do you have a Team TAPS virtual campaign story to share? Send us your story at editor@taps.org.