Filing taxes can be a daunting task and is one that I dread every year. I not only have to file my own taxes, but also for my two boys since my husband’s annuity comes in their names, making it a triple task. In the past, there hasn’t been anything extraordinary with their taxes and they are generally easy returns to compile. However, recent tax reforms have made significant changes to the kiddie tax and when filing their 2018 taxes we were hit hard, owing over $3,000 between the two. Thanks to TAPS and Congress, legislation was passed in late 2019 to fix the kiddie tax issue for surviving families. I normally use the online H&R Block military program to file and when working on their taxes this year I found that those changes were made so late in the year they were not yet updated on the tax prep websites. As a result, I knew I would have to calculate them manually in order for them to be completed accurately.

I put off filing as long as I could because I knew it would be a hassle. However, when our governor gave the “shelter in place” order I thought it would be the perfect time to not only get these taxes done, but also enlist my boys’ help. They initially had two weeks off before starting online school, and while they thought it was a nice vacation, I thought we should be productive; I would teach them some new skills. They are 14 and 12 and at the age where I felt they could start to understand some of the intricacies of adulting — including taxes. 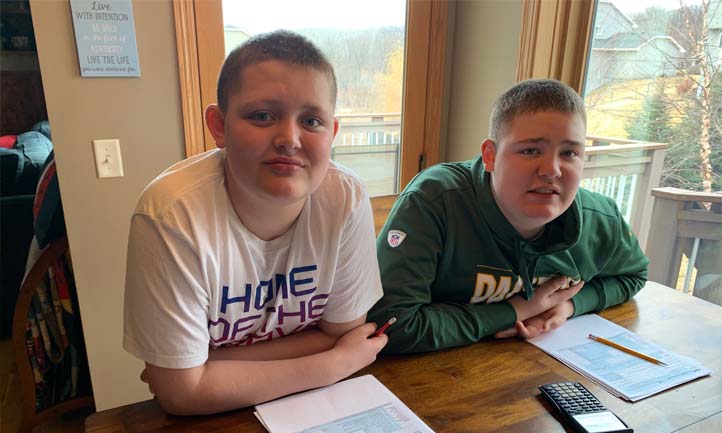 Rachael Hill taught her sons Tyler, 12, and TJ, 14, on the right, “some of the intricacies of adulting — including taxes” during the stay-at-home order in Minnesota. Photo courtesy of Rachael Hill.

We sat down together, all armed with our own copies of the forms, and worked through the tax forms together. My boys have always known that taxes are filed for them because their dad’s money comes in their names, but they never really thought much about it because I just filed them all myself. Sitting down and allowing them to see how everything works together (their income, my income, investments, etc.) seemed to give them a new understanding and appreciation of the underlying processes of working with money. It created interesting conversation, for they started asking more and more questions related to taxes: how much people make, how taxes work, how tax brackets are broken down, etc. They really seemed to understand it and I was excited to see that they were actually interested in it.

I was very open with them about our money, and as we talked about taxes, the conversation also transitioned to budgets and how I personally manage our household finances. It was very eye-opening for them to see how and why things are paid for in certain ways. I realized there are a lot of things they didn’t know about so I introduced them to terms like mortgage, IRA, and debt consolidation. I know that in 6th grade they learned how to balance a checking account with a check register, but this process made me think about how little our kids generally know about money. Why is that? Perhaps because it is a topic we don’t openly talk it about, not only with each other, but especially with our kids. Maybe it’s because we don’t think they are responsible enough to be able to handle the information. Whatever the reason, I want my boys to understand what all of these terms are now and understand how to create a monthly budget so that they are ready to manage their own money when they head off to college in a few years.

When I was a young airman in the Air Force I had no idea what I was doing with my money and was especially lost when it came to creating a budget. Luckily, I figured it out early on, but it could have been disastrous had I not. Sitting down with my boys to calculate their taxes was initially me looking for some help with the process, but it became so much more than that. It was educational for all of us and something we will definitely continue to talk about and work through in the years to come.

Rachael Hill is the surviving spouse of U.S. Air Force Captain Jeffrey Hill. She lives in Minnesota with their two sons.