“If what you’re doing requires no sacrifice, then you can do more.” That’s a phrase I heard once and it really stuck with me. And more than that, it guides, if not provoke, most decisions I make on a daily basis. I ask myself frequently if what I’m about to do is going to improve the lives of others, especially of those I care about most. And there are few in this world I care about more than my TAPS kids. So one day it dawned on me that there was another thing I could do for them: tell their story. Thus was born the idea for my tattoo, or TAPStoo, as I’m calling it.

Symbolism abounds throughout this piece of art, and I’m very grateful to the artist for bringing my vision and purpose to life. The tattoo begins with a fleur-de-lis on each wrist. This is my favorite symbol in the world, and it often connotes family, camaraderie, and hospitality. On my right arm and tied to this symbol is a ribbon that reads, “who lives, who dies, who tells your story.” This is both a nod to the greatest musical of my lifetime, maybe ever — “Hamilton” — and also a perfect summation of the entire purpose of this tattoo. I’ve decided that I will tell the story of these TAPS kids and the loved ones they’ve lost from this day until my last day. 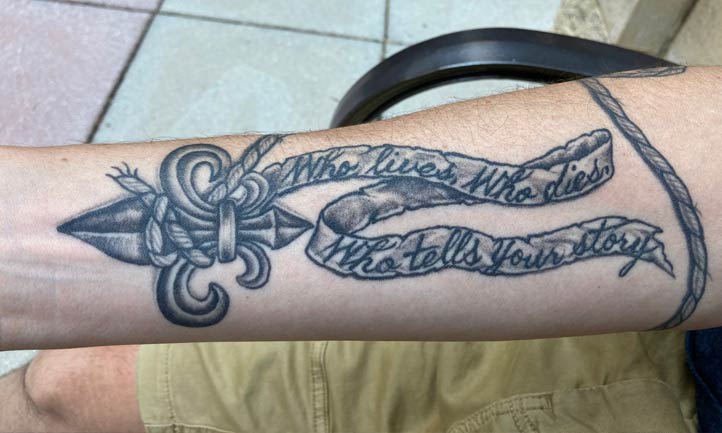 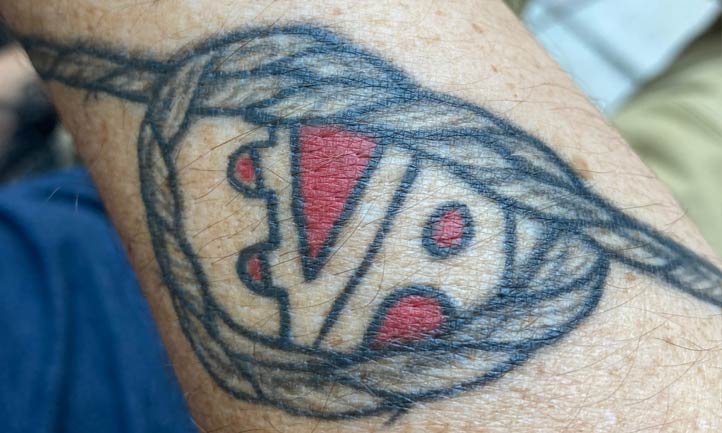 Also tied to the fleur-de-lis is a rope, and this rope connects both fleur-de-lis as well as all of the “knots” along its path. In this way, it serves as something of a common thread, like the fabric of humanity, of which we are all a part. The rope then snakes up and around my right arm, across my back, and back down my left arm to the other fleur-de-lis.

On this journey are nine knots, each of which appear to be simple overhand knots but are loosened into the shape of hearts, a testament to my love for the names contained within. There are four names on my right arm and five on my left, all of which are written in the very hand of the person whose name it is. The four on my right are for my family. My family is small but they are everything to me and comprise my mother, my father, my brother, and my stepfather. The five kids on my left arm are the ones I have become the closest with over my years with TAPS. The first is Tommy, my very first mentee, and someone I am still in very close contact with to this day…10 years running. Next are Aynsley and Brynnly, two little angels I met serendipitously at Snowball Express several years back. Then there’s my adventurer, Eleanor, and my creative and really fun little buddy, Dustin. It was so enjoyable telling them about this idea and seeing their excitement when I said I wanted their names to be a part of it. Ayns and Brynnly were particularly helpful with my aftercare when I came back from the tattoo shop, and also told me how cool it was! I agreed.

There is another ribbon tied to this fleur-de-lis that reads, “Every saint has a past, every sinner has a future.” This is meant to be a reminder that we are all flawed and at the same time we’re all worth being loved. These children, and their families, have suffered the unthinkable. They have had enough sorrow for two lifetimes and they deserve to feel as much joy as is heavenly possible for the rest of their lives. In a small way, I feel that this act reinforces what I try to communicate to them each and every time I see them, which is that they are loved, they are smart, they are fun, they are kind, they are beautiful, and most importantly, they are not alone — ever. With this tattoo I have made a promise to them all: they can reach me at any time and I WILL answer no matter the time of day or night. I’ve told them that this sort of “bat signal” shouldn’t be misused, so if they call and it’s not urgent, I will tell them that I will call them back as soon as I can. 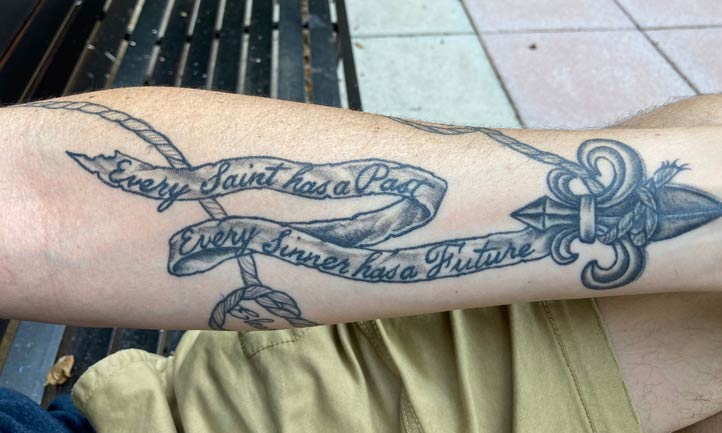 The fact is, I have more kids I will ultimately connect to this tattoo, this story. These five just happen to be where I started, but rest assured the others are not at all forgotten and I still tell their stories every chance I get. And on that note, it is very comforting — the reactions I get from people when I talk about the tattoo. It is clearly an attention-getter, and that’s what I’d always hoped. Every time I’m asked about it, that’s another opportunity to talk about these incredible families and possibly even open the door to others getting more involved and helping other families on their journey.

As I’ve heard and said many times, we’re all in this together. This tattoo is not only symbolic of that sentiment, but a way show it. I love every single person my tattoo represents, and they ARE my story. 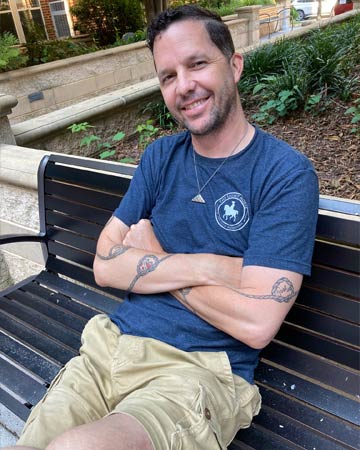