What is a gift? Our loved ones were our first gift. Then, over time, we acquired physical gifts from them. The opening picture is a deer garden ornament my son, Bryon, gave me that I treasure.

In this week’s message, survivors have shared both kinds of presents. I was so excited about all the responses that came to answer this question, so this week’s message will be a bit longer than usual. I know you will enjoy the stories. 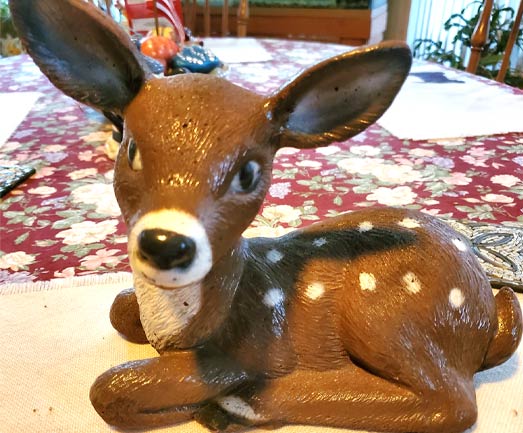 Is there a special gift or present your loved one gave you? 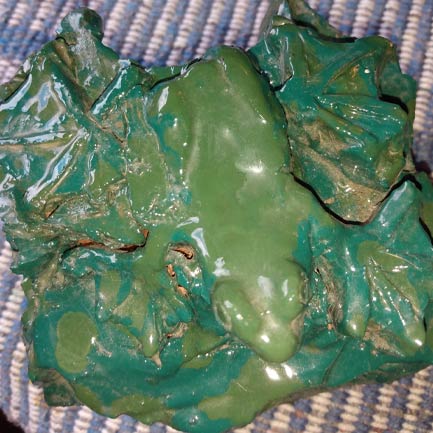 From Marcia, mother of Patrick: My Airman son, Patrick, was a gifted artist in several mediums. One day he walked in and plunked this down for me. It was a dark winter afternoon, so I couldn't see what it was at first. Then I turned on the overhead light and I was speechless. He had sculpted a frog out of a sculpted rock. He was 16 and I was gob smacked by the intensity of his talent in line, color and song. 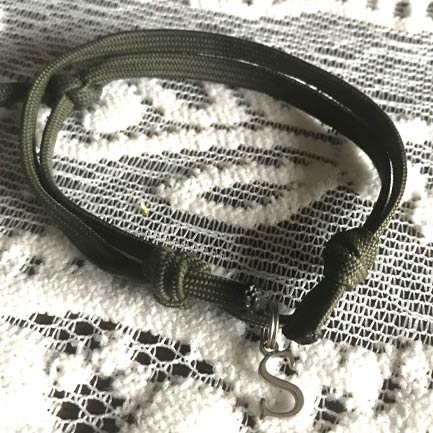 From Robin, mother of Steven: I made this bracelet from the shoe string that was around Steven’s neck when he returned from Afghanistan in 2011. It held his dog tags. He cut it off and put his tags back on the chain. As he dangled the shoe string over the trash I said “Don’t throw that away!” I didn’t know at the time how much it would mean to me until we lost him 6 years later.

From Kelsey, mother of Michael: My son gave me a jigsaw for my birthday. Actually he told me to pick one and then he paid for it. He had no clue about power tools. I still have it and use it occasionally. My dad and I have a woodshop together we call it “Brinkley and Daughter Woodworking”. Just seeing it makes my heart glow from the memory of buying it. 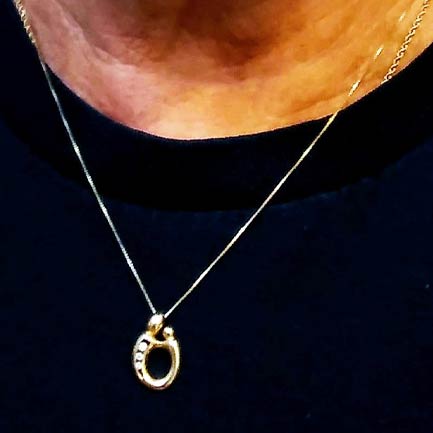 From Belinda, mother of Benjamin: Benjamin wanted to get me something special for my 60th birthday. His girlfriend told me he did a lot of research. He called me on the phone and told me I was getting a package, but couldn’t open it until he called me on my day. I thank God I was talking to him on the phone when it was delivered to me. He was able to be involved in that part.

Next day on my birthday I waited and waited, but he didn’t call and I was dying to open my package. Benjamin always liked to surprise me. I finally called him and he said I could open it. He apologized for not calling, listened while I opened and screamed with excitement when I saw my mother/child necklace. I have 2 children so he got it with 3 diamonds for us. I never take it off unless absolutely necessary and think of him every time I look in the mirror and see it or feel it. 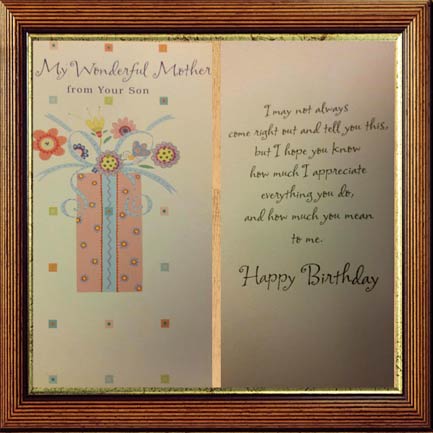 From Caryn, mother of Nathan: There were lots of special gifts from my son, but the one that means the most is this birthday card I found while going through his belongings and I found it right before my birthday. Now it sits in a frame where I can see it any time.

From Elizabeth, spouse of Joseph: I'm not sentimental about most things, but I treasure the rocking chair Joe gave me when we got the results of the test proving I was pregnant with our first child.  Carolyn turned 48 last week and the chair is in my living room today. 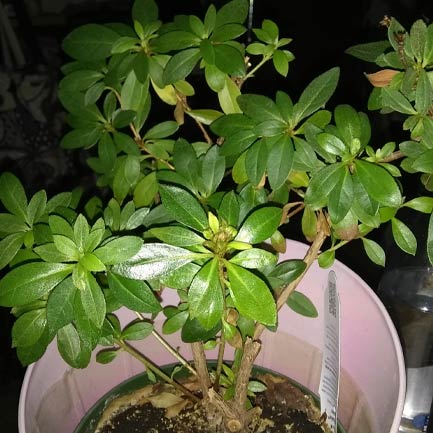 From Lydia, mother of Carl: For Mother's Day in 2018, my son, LCpl Carl Burgdorf, had a plant sent. It was a blooming azalea. I had a terrible time trying to keep it going. There were several times I almost gave up and chucked it. But I just couldn't give up.

I trimmed it back drastically and it started to revive. It bloomed in November just after the first birthday I celebrated without him. I'm hoping that it will bloom again soon, maybe for his birthday this year. 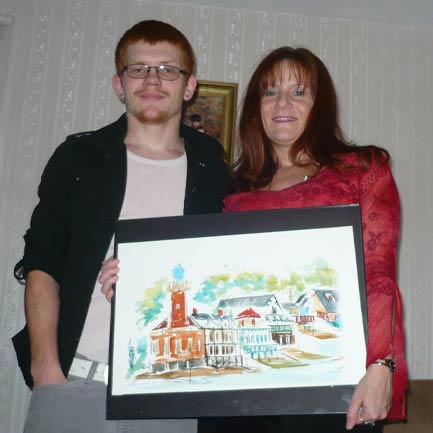 From Charlene, mother of Devin: On Mother’s Day 2008, my talented son gave me this picture that he drew for me. This gift was extra special, because he wrote a note on the back of it that I didn’t see until after he passed. This picture was hung on my wall for 8 years with a beautiful message I knew nothing about. It suddenly fell off the wall and the frame broke. That’s when I read “Happy Mother’s Day, Ma. Anybody can be a mother, thanks for just being my mom.” I burst into tears when I first saw it.

From Samira, mother of Andres: Andres, was my gift. Becoming a mother of Andres was my greatest gift.  Andres gave me only beautiful memories. This is the reason I can survive.  Andres's behavior was excellent. He studied, never skipped school, did his homework. He didn’t smoke or drink. He had a big heart and was smart.

If you would like to send a message thanking one or all of those who participated in this week’s Saturday Morning Message, send it to online@taps.org and your thoughts will be passed along to them. You never know how your words may touch the heart of another.

Kim, spouse of John, shared our next question which is: “Listen.Learn.Love.” is the TAPS theme for September's Suicide Prevention Month, but it is three actions that we bring to life at TAPS each and everyday for all survivors. As survivors, how have you put these concepts into action, either in your own grief journey or in support of another survivor to bring about hope and healing? We would be so honored for you to share your story with us.

The Saturday Morning Message was created so survivors can share questions and read how others respond. Questions for future messages are always welcome. You can reply to this message or email online@taps.org In order to have your reply included the following week, it is best to send your response by Tuesday morning. Thank you to everyone responding this week and those who read this message.

This week’s song is "I Won’t Back Down" sung by Tom Petty and the Heartbreakers. It comes from Rachel, sister of Kenneth who wrote, “This has always symbolized the military to me since they don't back down, no matter what. Since my brother's death, it has become my song. It reminds me that even when there is no easy way out, just like my brother never would have - I can't back down.” 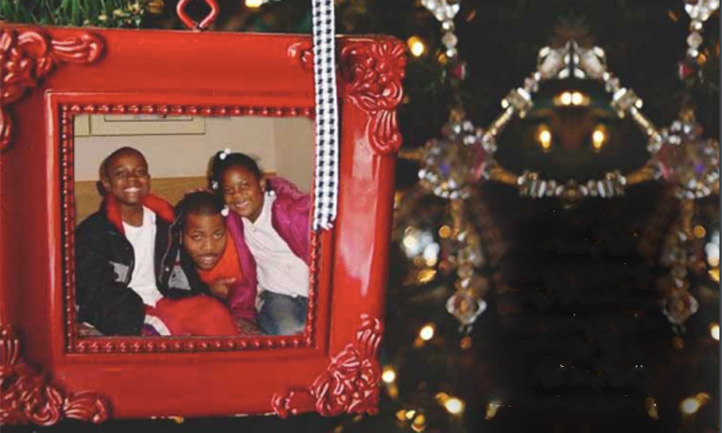 How I Honor the Memories of My Dad During the Holidays

While the memories can and do bring pain, they’re matched by the purest sense of joy as I think about our happiest moments together. 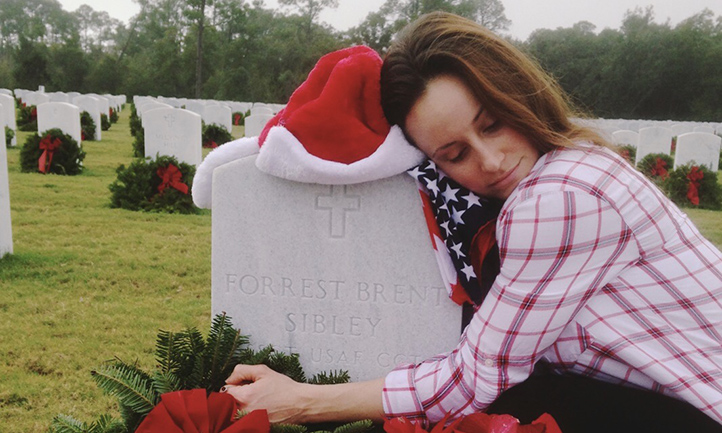 4 Gifts My Boyfriend Left Me After His Death

Gifts don’t always come in the form of a pretty box wrapped with shiny paper and a bow; they sometimes come in ways that are invisible to the eyes.