Sports can be a powerful force to bring people together. But at a time when we can’t be physically together, we are fortunate to still have the ability to be together as a community. We may be physically distanced, but we are still socially connected. As much as we, the fans, are missing our connection to teams and sports, many players are missing their connection to their fans too.

For the first TAPS Huddle, TAPS families submitted questions for Alex to answer. We learned about Alex’s early years playing football, how and why he chose center as his position, how he is handling social distancing and filling his time at home (spoiler alert: it’s with cooking and baking), what his career path would have been without football and more.

Alex has been with the team since 2016 and is no stranger to TAPS. As a Falcon, Alex has hung out with TAPS families at training camps and military appreciation events. He has participated in our signature program, the TAPS Salute to Service, where he honored fallen heroes by wearing their initials on his helmet during a home game in November. His kind heart and genuine care always leaves a lasting impact on the surviving families. The Atlanta Falcons have been a long-time partner to TAPS and regularly engages with surviving families through our teams4taps program. Steve Cannon, the Falcons’ chief executive officer, serves on the TAPS Board of Directors.

During the live event, we had some great questions asked by our TAPS families! Because of limited time, we didn’t get to all of the questions. But Alex was happy to answer them via email and we’ve included those questions and responses below. 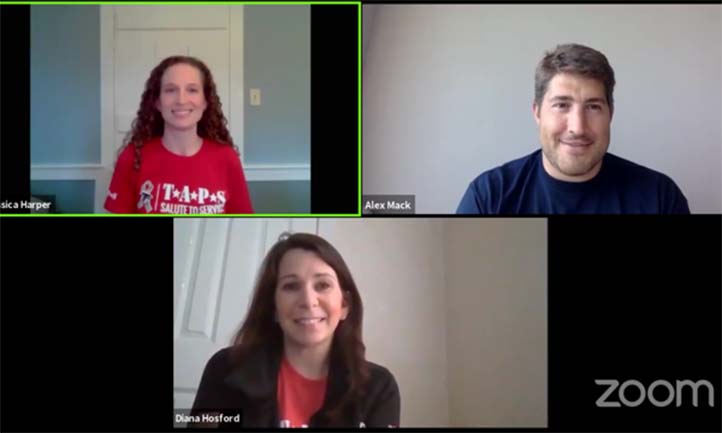 Question: How do you like the new uniforms? – asked Erikka Mitchell, surviving spouse of Lance Cpl. Omoro Mitchell (The Falcons just released new uniforms for the upcoming season; this is the first uniform redesign in 17 years.)

Answer: I like the new uniforms! I’ve always been a fan of our black throwbacks and now we get to still wear those, but also our normal home jersey is black and I think it’s a really good look.

Question: My son loves sports but now that we are staying inside, he is missing his teammates and his practices. Do you have suggestions for what he can do by himself, indoors, to get stronger/faster? – asked by Michelle Taylor, surviving spouse of Maj. David Taylor, Jr.

Answer: Indoor activities are tougher, but I remember being younger and wanting to get stronger, so I would do push-ups at night. It’s a good exercise for shoulder stability. Pull-ups are another really good strength exercise. I’m terrible at them and I constantly want to get better. You can do tons of strengthening with push-ups, pull-ups and dips.

Faster is a tough one: Pair any of the above with vertical jumps, that’s something we still do now to recruit explosive muscle.

Question: Are you excited to work with some of the free agents that were added to your team, like Todd Gurley? – asked by 12-year-old Tyler Hill, surviving son of Capt. Jeffrey Hill

Answer: Every year there are new people on the team. It’s always exciting to add talent to the offense and get to know the new guys and see them on the field. Gurley was on the American Football Without Barriers (AFWB) trip this year in Hungary. Was fun to get to know him out there and I’m excited to play this year with him. (AFWB is the charity I always go overseas with and help spread football and coach the game to foreign players.) 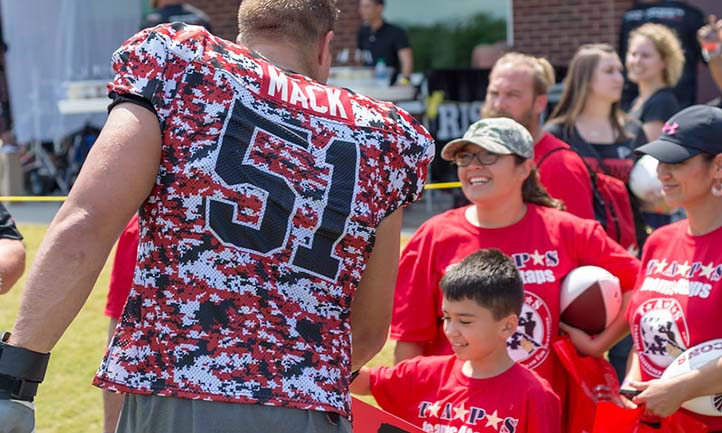 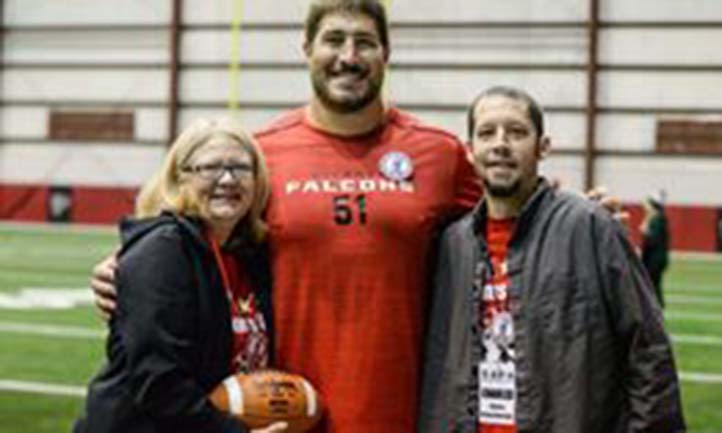 Question: What's the biggest setback you had to overcome in football? (We're looking for encouragement for my high school baseball player son, to continue towards his goal to play college ball). – asked by Anita Davis Sullivan, surviving spouse of CE3 Michael Sullivan

Answer: Toughest setback of football I’ve had is breaking my leg and missing the rest of the season. It was scary to think about never recovering and not playing again. I think the important thing is to set small goals that work towards your main goal. Create good habits and make sure whatever you do it’s adding value and working towards your goals.

On a separate subject, I think having the dream of playing college sports is a great one. I love the time I spent at Cal (University of California). I also am a firm believer that kids should also make school a priority. I went to Cal because it was a great academic institution and if football didn’t work out, I would have a great education to fall back on. Work hard and do your best in everything you do.

TAPS extends a heartfelt thank you to Alex and the Atlanta Falcons for all they do to support TAPS families. We look forward to seeing you on the field again!

Do you have a favorite team or sports league that you are missing during this time? We’d love to hear your stories. Also, we hope to continue to bring TAPS Huddles to you throughout the next couple of weeks. If you have any ideas or questions, please send them to teams4taps@taps.org