September is National Suicide Prevention Month. This article is the last of five stories by TAPS suicide loss survivors who wish to share lessons learned from their grief journeys. We invite you to share this story using the hashtag #SurvivorSunday. If you know or someone you know is struggling with thoughts of suicide, please call the National Suicide Prevention Lifeline 24/7 at 800-273-8255.

When I think back to March 15, 2010, I realize how naïve I was at that time in my life. I had it all figured out. My favorite dreams were close to coming true. I’d finally found the perfect match, and we were engaged to be married. Everyone was on board with the upcoming union and the blending of our families. My engines were running on all cylinders. I was a lucky man.

Fast forward to the following year. Same date. And just three days after we’d mailed the last of our wedding invitations. I was on the phone with my 23-year-old Navy son, Joshua, desperately trying to talk him out of taking his life. My head was spinning trying to find the right words to save his life. It was the greatest single fear I have ever encountered. For 15 long minutes, I struggled to stay calm and be the strong, loving dad Joshua needed. But then he hung up the phone, and my life was changed forever. 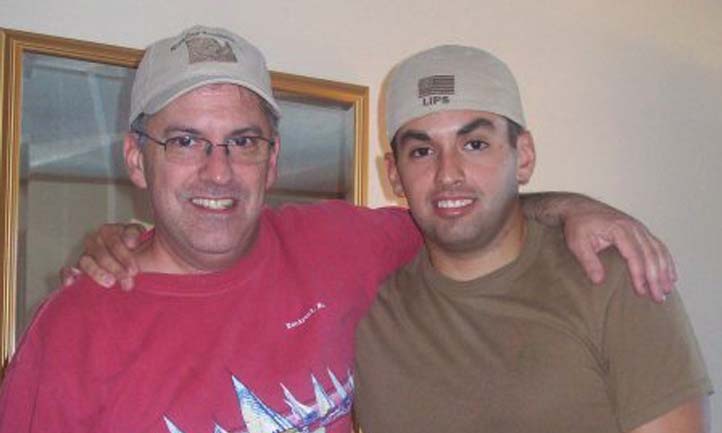 It all became a blur. The world kept moving but I did not, as if I were frozen in space. Whereas before I could control events, now I could only watch them happen—to me and my family, helplessly. What the hell had happened? I was a father. I was in charge. It was my responsibility to protect my children. Now Joshua was gone. I believed that I had failed him. I thought that I could never recover. Who could I even turn to for help? Who could possibly understand!

The Navy Casualty Assistance Officer assigned to us after Joshua’s death left us a red folder full of brochures. I had no time or use for that. I was grieving and in pain and my mind was so clouded I could barely function let alone read. So the folder just sat there for a long time. However, one particularly sleepless night I sat at my dining room table and began to thumb through the contents of the folder. Three lines on one of the brochures caught my eye: “Remember the Love. Celebrate the Life. Share the Journey.” I flipped to the front to find the TAPS logo. I was interested in learning more.

I would go on to reach out to TAPS, to participate in their activities, and to receive the support I needed. Eventually, I would become a mentor to others and later a full-time member of the staff. I never wanted to be on this journey or to have to learn the things I’ve learned. But it’s my duty now to share some of my lessons with you.

So what exactly have I learned since that tragic day?

Well, first off, I came to appreciate the inestimable power of peer support. In the beginning I thought that I’d be able to handle my grief on my own. I arranged for some counseling but it turned out not to be enough. My family and friends were supportive, but none of them were capable of saying what I needed to hear. I didn’t even know what I needed to hear; I just knew they weren’t saying it. Connecting with peers at TAPS, other survivors who understood exactly the pain I was in, helped me to realize I was not alone. Just being aware of this community of other suicide loss survivors gave me hope that I could get through it.

Next, like most suicide loss survivors, I desperately needed to find out why Josh chose to take his life. I couldn’t figure out why someone so brave could not muster the courage to live the rest of his life. It doesn’t take a genius to figure out the only person who could answer this was no longer living, so I’ll probably never know the full story, and I’ve come to peace with that. Eventually, though, through reading and talking with hundreds of other surviving parents like me, I came to understand one thing that many people who die by suicide share: that Joshua was living in pain, that he was resistant to getting proper treatment for fear of harming his Navy career, that he didn’t want to end his life, he just wanted to end his pain.

Above all, I have learned that we survivors have the power to think and do as we please. Despite the pain of our loss, it is we who choose how to show up in this world everyday. The day Josh died, I could easily have chosen to quit myself. But after much contemplation, and allowing my spiritual side to take the reins, I decided that I had too much to live for. I needed to find a way to turn this tragedy into something positive. I couldn’t save my son from his demons, but I could try to save others from following down that dark path. And that desire to save others is the meaning I draw from my work with hundreds of other surviving dads and others at high risk for suicide.

Life is too short to allow my days to go by without feeling a sense of gratitude for all the lessons I’ve learned in my grief journey. I desire to be happy and joyful so I make conscious choices to set my intentions on doing just that. I surround myself with people who care for others, often more than they care for themselves, whose generosity is boundless, and whose positive outlooks on life give me energy. I feel Josh in my heart everyday, and the messages he sends me tells me I’m on the right track.

My family is healthy and happy again. We have found ways to honor Joshua’s life while not allowing his death to define the rest of our lives. We have learned that we have no control over the actions and reactions of others. But we do have control over our own. I like to refer to the Serenity Prayer when times begin to challenge me:” God Grant me the serenity to accept the things I can not change, the courage to change the things I can, and the wisdom to know the difference.”  Life is not perfect but...it’s all we got.

How I learned to re-embrace this precious gift of life

How I learned to take ownership of my grief

How I learned to confront my despair and rededicate my life