Surviving sibling Angel Pansini first came to TAPS at the age of 12 after losing her brother, Marine Corps Sgt. Nicholas Pansini, to suicide. As a child in the TAPS Good Grief Camp, she experienced the healing that comes from being with other grieving military children.  She grew by receiving love and support from TAPS Military Mentors who were able to be there for her after her brother had died. 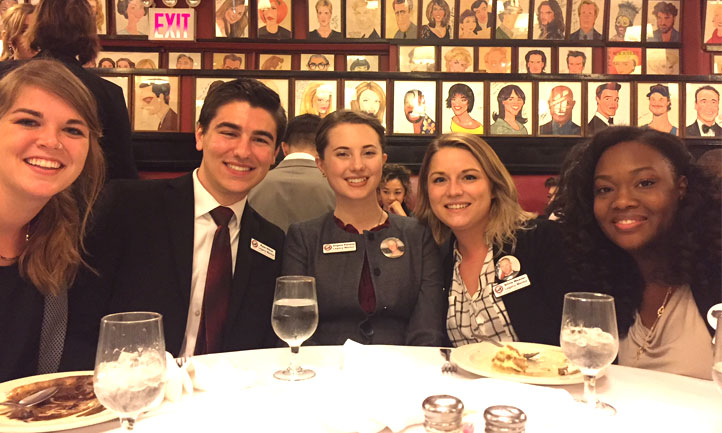 Angel Pansini, center, is shown with other survivors at an event for Legacy Mentors in New York last year.

Now a junior at the University of Colorado Denver, 21-year-old Angel is studying philosophy and linguistics and using her experience to help others. As a TAPS Legacy Mentor, she now supports young bereaved military children and provides them with invaluable guidance and care that comes from someone who truly understands loss.

TAPS will present the 2019 Senator Ted Stevens Leadership Award to Angel at its 25th Anniversary TAPS Honor Guard Gala, to be held at the National Building Museum in Washington, D.C on March 6, 2019. The award is presented annually to a young military survivor who has demonstrated outstanding leadership and service to other surviving military families.

“Angel honors the life of her brother by remembering his service and giving back to others as she navigates her own grief journey,” said Bonnie Carroll, TAPS President and Founder. “She is an outstanding example of a young person who is the living legacy of her brother. Angel is an inspiration to other young survivors and we are very proud to honor her this year with our most prestigious award.”

Angel’s brother, Sgt. Nicholas Pansini, served four years assigned to 5th ANGLICO, USMC, and was deployed twice to Iraq. Her fondest memories are of her brother’s wonderful hugs which she now loves to share with the children she mentors at TAPS Good Grief Camps.

Beyond interning at TAPS and serving as a TAPS Legacy Mentor, Angel has honored the memory of her brother through speaking out about coping with suicide loss and appearing in a video for veterans struggling with suicidal thoughts.  Also a talented writer, she inspires others with articles she’s written for TAPS Magazine and The Washington Post. Angel says these experiences have had a profound impact on her, demonstrating that connecting with others through shared experiences is a powerful way to find meaning and purpose in life.

“It is nearly impossible to reflect on who I am without mentioning TAPS,” Angel said. “In learning the tools to help me navigate grief, I found my strongest assets. The more I write about my grief, and the more I interact with survivors through their stories, the more I find myself appreciating language. Speech and writing are the catalysts to make immortal my brother’s memory. I am proud of what I have done with TAPS and humbled by what I will continue to do to honor my brother and the young survivors I mentor.”

Senator Ted Stevens, the namesake of the award Angel will receive, left behind a legacy of caring for the families of our nation’s fallen military heroes. Following the Army National Guard plane crash in 1992 that took the life of his friend, Army Brig. Gen. Tom Carroll, Stevens helped Bonnie Carroll found TAPS as the national nonprofit organization caring for all those grieving the loss of a military loved one.

The late senator understood firsthand the toll traumatic and sudden loss can take on a family. His first wife, Ann Cherrington, and four others were killed in a 1978 plane crash that Stevens survived. Earlier in his life, Stevens served as an Army aviator in World War II and was a recipient of the Distinguished Flying Cross. In 2010, Stevens was killed in a plane crash in Alaska. TAPS continues to honor his legacy by presenting this Leadership Award annually in his name.

Funds raised from the Gala will be used to provide critical support services to families who have suffered the loss of a loved one who served in the military.