Recent headlines have drawn attention to the increasing rate of suicide among military members. At TAPS we know that a death by suicide leaves survivors in a wake of emotions and challenges that complicate an already painful grieving process.

For more than 10 years, TAPS has been caring for and supporting suicide loss survivors. We’ve embraced 11,500 surviving family members grieving the loss of a loved one to suicide. Over the years, TAPS has developed suicide programming to address the unique needs of suicide loss survivors. Our TAPS Suicide Prevention & Postvention team works with partners at the Department of Defense, the Department of Veterans Affairs, and other organizations across the country to help save lives. 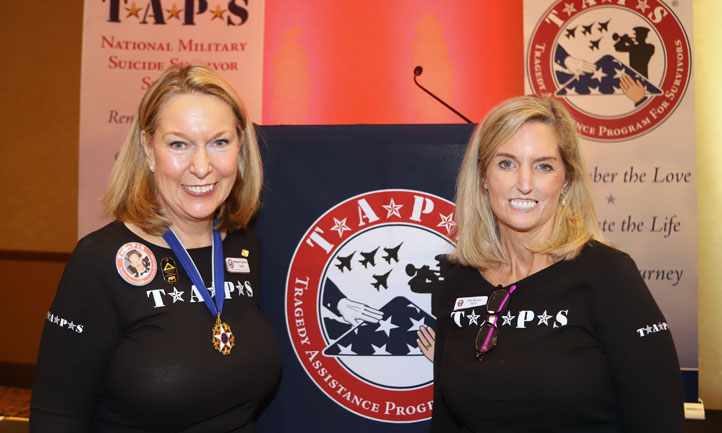 Kim Ruocco, TAPS Vice President of Suicide Prevention & Postvention, recently spoke to a group of 800 Marines in North Carolina about her personal experiences with suicide loss. She shared how her husband, John, a Marine major who died by suicide in 2005, was a decorated Cobra gunship pilot with three deployments under his belt. By all accounts, he was the perfect Marine, Kim said. “Everyone loved and looked up to him,” she said. “What they didn’t realize was that he suffered from bouts of depression and post-traumatic stress.”

“Military families often hide their problems in an effort to appear perfect. This can be a dangerous way to live, especially if a physical or mental health issue goes untreated,” Kim said. “We want them to know that taking care of your brain as well as your body is the healthy, strong thing to do. Get skills and treatment before the infection, injury or illness gets so bad that it negatively impacts your career and family.”

In just over a decade, Kim and a team of peer professionals at TAPS have  developed a Suicide Postvention Model of Support that provides hope and healing to suicide loss survivors. This model is recognized as a successful, empirical method of support that TAPS shares with organizations and providers across the country. Postvention is the effort to decrease risk among loss survivors and help set a healthy foundation for grieving. The model consists of a three-phase approach that includes stabilization, grief work and post-traumatic growth. Stabilization focuses on identifying and addressing suicide-specific issues that may complicate the grief journey. Grief work is the process of moving away from how our loved ones died and rebuilding relationships with them that focus on how they lived and served. Post-traumatic growth is the process of finding meaning from the loss, such as being motivated to prevent other suicides.

“TAPS postvention model offers a roadmap to hope and healing to a population who have experienced one of the most devastating things that can happen to a family,” Kim said. “Not only does this model decrease risk and increase hope, it offers opportunities for post-traumatic growth through service to others.”

If you are a suicide survivor and interested in attending the 31st Annual Healing After Suicide Loss Conference in Denver, Colorado, it will be held on April 27, 2019. The conference is co-sponsored by TAPS, the American Association of Suicidology and the American Foundation for Suicide Prevention, and is open to anyone who has experienced suicide loss. The theme of the day-long conference is “Making Connections, Sharing Hope,” and will feature workshops with leaders in the field of suicidology, and have sharing groups where survivors and grief professionals can come together. More information on the conference, including a list of presenters, and registration guidelines are available on the Healing After Suicide Loss Conference flyer (PDF).