The TAPS Suicide Prevention and Postvention Program placed increased focus on its best-practice TAPS Suicide Postvention Model in 2019, building the 11th annual National Military Suicide Survivor Seminar around the three-phase model so that survivors in attendance could see a clearer path to their post-traumatic growth and defining themselves as more than survivors.

Almost 1,000 survivors of military suicide loss — adults and children, young and old, new and familiar — convened for another successful weekend of connections, learning, hope, and healing. Participating survivors benefited from the range of high-quality programming for which TAPS is known in a comforting and supportive environment and in a setting of rest and relaxation at the Pointe Hilton Tapatio Cliffs Resort in Phoenix.

The seminar offered adults a myriad of sessions that explored topics such as what to expect in therapy, family dynamics after loss, and understanding why people may become suicidal. One marked difference this year was the decision to detail the TAPS Suicide Postvention Model, developed over the past 10 years, which informs all our suicide programming and has been implemented in programs across the country and internationally. 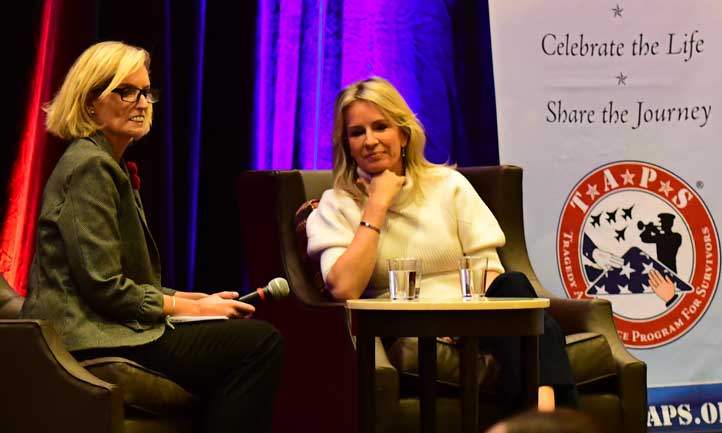 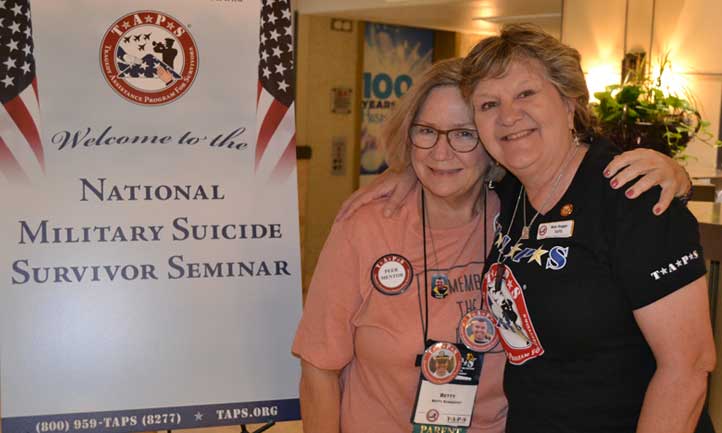 TAPS Vice President Kim Ruocco's opening session laid out the model as a "roadmap" to move survivors from a devastating loss through a healthy grief journey and toward opportunities for growth. It also allows us to simultaneously “remember the dash” (focus on how our loved ones lived, not how they died) and focus on our own lives as we work toward post-traumatic growth.

Kim shared a heartfelt and authentic chat with Dr. Jennifer Ashton from Good Morning America, who talked about her own loss and her journey of healing, providing validation of the "rollercoaster" feelings of grief that survivors of suicide loss experience.

Dr. Matthew Miller, acting director of the Suicide Prevention Program at VHA Office of Mental Health, shared his personal motivations for leaving, and then reentering, the field of psychology and mental health, specifically as it related to suicide prevention. He shared how his story was shaped by the profound loss of a best friend, Major John Ruocco, Kim’s husband.

One attending survivor had this to say about her experience in Phoenix:

“Remembering the Dash … so many emotions. In our culture, we recognize those that died ‘heroic’ deaths with medals, awards and bridges and highways named after them. These are well-deserved honors for those that laid down their life in sacrifice to our nation. This weekend, I have been encouraged to also acknowledge the heroism, regardless of how culture recognizes military and veteran death by suicide, by acknowledging the warrior heart and spirit by which my husband LIVED. Tyrone is among less than 1 percent of our culture that answered the call to serve. He was brave, courageous and strong.” 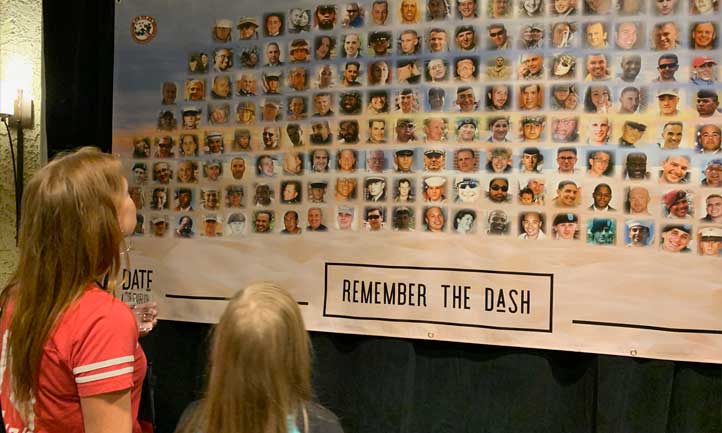 Wounded Warrior Project funded three installments of the life-changing two-week Home Base Intensive Clinical Program (ICP) for survivors of traumatic military suicide loss. A total of 25 TAPS survivors (14 spouses and 11 parents), met at the Home Base Program’s headquarters in Boston for the programs, which mirrored other evidence-based Home Base programs. Throughout each program, a team of multi-disciplinarian clinical professionals introduced methods and practices that treat “co-occurring PTSD,” complicated grief, and depression. The program — which is done at the direction of and oversight by the Massachusetts General Hospital’s Department of Psychiatry — consists of treatments that include individual evidence-based psychotherapy for PTSD (“prolonged exposure” and “cognitive processing therapy”), group therapy for complicated grief, group, and mindfulness training, as well as other curative activities like yoga, fitness, nutrition, and art therapy.

TAPS staff was instrumental in recruiting, referring, and communicating with survivors throughout their candidacies for the three Home Base programs. TAPS professionals with deep experience in trauma-informed care prepared all 25 survivors months in advance of the start dates.

Study results are under review and early feedback has been extremely positive. Survivors repeatedly made comments about how, if it had not been for TAPS and Home Base, none of their healing would have been possible. One survivor kept thanking staff over and over, mentioning how the work that TAPS, Home Base and WWP are doing is literally saving lives, especially hers. Another said that if it had not been for a TAPS staffer’s outreach many years ago, she never would have lived until today.

All of the survivors expressed gratitude, a deep sense of connection to their TAPS family and Home Base clinicians, but also the newfound ability and desire to now “pay it forward” in helping mentor other new survivors. Today, many of the survivors have chosen to go back to college, and some wish to work in the fields of mental health or social work to support veterans and military families.

These comments are representative of the powerful feedback we received:

“I am proud to report that Homebase saved my life!”

“The last two weeks were some of the most difficult days, ripping off all of the bandaids to every emotion I pushed far away in order to survive. I am forever grateful to Homebase.org and Tragedy Assistance Program for Survivors (TAPS) for the life-changing opportunity. The ICP staff knew exactly when to push and when to be patient. They gave me my life back! I have plenty to continue working on and growing in for myself and for my children but I know I can do this. I know there will be good days and bad days. I know that it’s okay. I know I am NOT broken. I am relieved to know I am not alone...to have found a group of amazing (former) spouses who have lived similar experiences. I can begin peeling my masks off. I can do this. With the support of strong family and friends, I’ve got this!”

The Healing Power of Our Stories

In a series we called #SurvivorSunday, five suicide loss survivors who are part of the TAPS staff wrote essays about their loss and grief journeys. These profoundly moving stories reached almost 60,000 people. Read these and other stories by survivors of suicide loss.

In addition, another survivor wrote an essay about her brother’s suicide in her state’s bar association monthly magazine. Two suicide loss survivors represented TAPS in broadcast media interviews, one for NBC and one for ABC. In each case, the survivors were prepared well in advance to ensure they were on message and engaging in self-care throughout.

The TAPS Suicide Prevention and Postvention team worked closely with four of our Air Force families to prepare them for production of a series of Air Force suicide prevention videos. Their interviews were filmed at the seminar in October.

Finally, two other survivors found ways to make meaning from their loss by speaking to military audiences about their journeys at Fort Lee, Virginia and McConnell Air Force Base.

2020 is a big year for the TAPS Suicide Prevention & Postvention Program. We’ll be providing familiar critical programming like the National Military Suicide Survivor Seminar in October — in Boston for the first time — and at least four more cohorts of the Home Base Intensive Clinical Program, also in Boston. 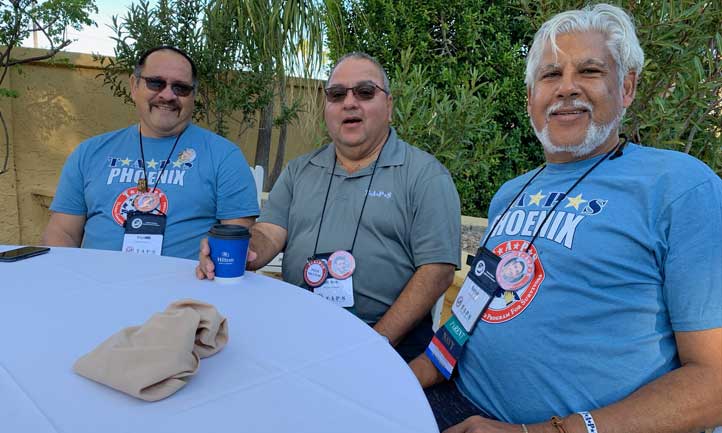 We will be hosting two new events focused on suicide loss survivors who are further along in their grief journeys: an as-yet-unnamed “suicidology summit,” where survivors can learn more about the science and research of the topic of suicide; and “post-traumatic growth retreat,” where survivors will be introduced to various opportunities to achieve deeper meaning from their loss.

Finally, the team will be rolling out two manuals (like military “field guides”) that provide information and resources on suicide postvention. One is intended for survivors, and the other will be directed at organizations and professionals. All of our activities in 2020 will be guided more deliberately than ever before by the TAPS Suicide Postvention Model.