TAPS will be among those leading the charge when dozens of survivors, military family advocates and veteran service organizations advocate for Congressional support to end the “widow's tax,” an inequity in the way benefits are paid to survivors.

A group of more than 50 advocates will “storm the Hill” this week to knock on the doors of lawmakers in Congress asking them to eliminate the survivor benefit offset, which reduces the benefits surviving families receive from the Department of Defense’s Survivor Benefit Plan and the Department of Veterans Affairs’ Dependency and Indemnity Compensation dollar for dollar, thereby prohibiting surviving military families from receiving the full sum of financial support their service member earned. 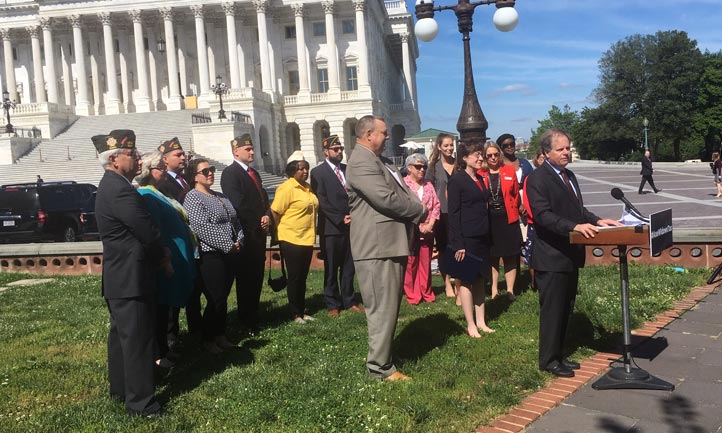 Sen. Doug Jones of Alabama, the original sponsor of the legislation to eliminate the Widow’s Tax, addresses the press on Capitol Hill, along with TAPS staff, survivors and other military family and veteran advocates.

While this has been an issue for nearly 40 years—affecting about 65,000 surviving spouses— there has been bipartisan legislation in both the House of Representatives and the Senate to fix the issue only for the past 18 years.

“Some of our families have been waiting over four decades for this moment in time,” said Bonnie Carroll, TAPS president and founder. “It’s important to remember that military spouses move every few years with their service members and face unemployment rates up to four times higher than their civilian counterparts. (This money) is essential to their financial security.”

Yasin Wade, whose husband died at 38 while deployed overseas, said she is raising three sons on her own. “I am trying to be both a mom and a dad,” she said. “These are benefits we paid for and are entitled to. … This has been a burden to families in the military community for too long.”

Affected families and their supporters are urged to contact their representatives in Congress to ask their member to pass and fund the bills to eliminate the offset:

“We are very, very hopeful this year that we will get this across the finish line,” said Sen. Doug Jones of Alabama, the original sponsor of the legislation to eliminate the survivor benefit offset.