Two weekends ago I attended the Southeast Regional Survivor Seminar and Good Grief Camp in Jacksonville, Florida. There I met other survivors and we shared our thoughts. The picture shows some who attended talking to each other, which to me is the best part of a TAPS event. I will keep my comments short today so you can read the special memories sent for this week’s Saturday Morning Message. 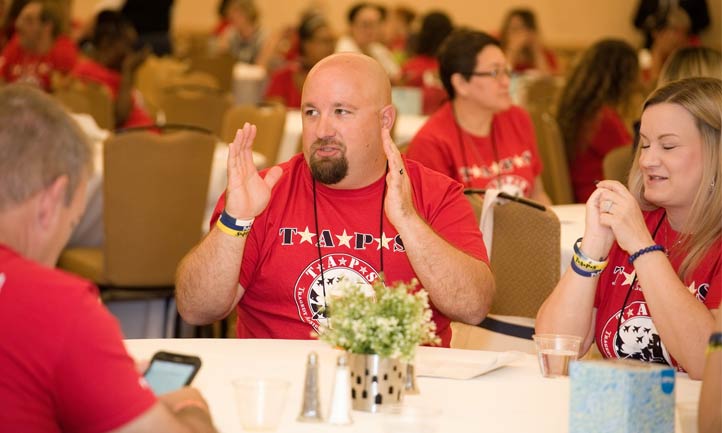 Remember, you can write to me anytime — to contribute, subscribe or if you have thoughts on what could make the Saturday Morning Message more helpful. I look forward to hearing from you.  My email address is online@taps.org.

Responses from Survivors to last week's question: Will you share a special memory of your loved one?

From Sandra, mother of Joshua: When Josh rode into town, our entire family would be swept off the couch and out into the world of adventure. Our first stop would be a new restaurant that he had read about on the internet. Of course, we would also have to go out to eat at Casarez, a local Tex Mex restaurant around the corner. It was a tradition. Josh usually ordered the footlong burrito, his dad ordered the Mexican plate and I ordered the street tacos. He started going to this place with his football buddies after practice when he was in high school. Josh would also take his little brother Jordan out to eat at Pei Wei. Jordan has autism and has specific restaurants that he likes to eat at and only feels comfortable with specific people when eating out. His big brother sometimes took him to the movies, the batting cages, Best Buy, or the mall. Josh was his big brother and best friend.

From Sharon, mother of Kevin: Immediately after our son’s death we were thinking of ways to honor him. He was a strong Christian and committed to three years of mission work in Belgium, so we set up an account with a ministry to help finance a church in Guatemala. Next year we will award a scholarship to a graduating senior from the class of 2020 at his high school to honor his memory. He was very active in high school and voted most likely to succeed. Success to him was doing God’s work, so he achieved the goal of leading a successful life.

From Deena, mother of Benjamin: From the time he could communicate and move around on his own, Ben looked for the adventurous, the different, the unique. When he was 3, we went with friends to an Asian restaurant for dinner. I read him the menu, knowing he wouldn’t settle for the children’s menu, and he chose hot and sour soup and pork and seeds. The waitress was reluctant and asked me if I was sure I wanted my ‘baby’ to eat such things. My spirited son, in his high chair, said, “I’m not a baby and she has nothing to say about it!” He gobbled every bite of the spicy soup and ate all the pork, complete with horseradish mustard and sesame seeds.

I try to carry his joy and exuberance and endless curiosity with me daily, remembering how he might have surged ahead, reaching for the next adventure.

From Rebecca, mother of Griffin: My favorite summer memories of my Griff and myself were going to Ocean City and Assateague, Maryland each summer. One summer Griff went parasailing. He had a blast! We also would go to the Air Force air shows. We also went to the Costello Park swimming pool. Griff loved the pool in our community, along with the socializing. When Griff was younger (up until 12) Manassas Park would have a July 4th bike decorating contest. Griff won four years in a row. They also had a lot of other activities for kids. Griff had fun with all of his other friends. Griff really enjoyed and looked forward to fireworks each July 4th. I loved watching my Griff have so much joy in what he was doing!

From Dale, grandmother of Seth: Seth was destined to be a soldier. His father was in the Air Force Reserves and when he came home after a weekend on the base with all his gear, Seth would dive in putting on anything and everything that his little body could manage. Then he and his brother (and father, I might add) would run through the house playing war.

His bedroom had a map of Europe painted on one wall. I made a camo quilt and his father hung cargo netting over the bed. Models of planes, tanks, etc., sat on shelves or more often were scattered on the floor.

When Seth was 10 years old, I took him to Washington, D.C. I am returning there in October to support my son and his wife who are running a marathon with TAPS. I expect the memories will be both painful and sweet. I didn't know it was possible to feel both deeply sad and joyful at the same time.

From Kelly, mother of Donoven: My fondest memory of Donoven was the day he surprised me coming home for a visit from the Marine Corps. I received the biggest hug from him and heard him laugh and roar when he tapped me on my shoulder while my back was turned to him while making our family's coffee in the morning. I almost dropped to my knees hearing his voice say "Hi Mom."

What a grand surprise! I was so elated with joy that I sobbed with love. He walked through the front door, stealth-like I heard nothing of his entrance. I suppose the Marine Corps taught him this. That does make me laugh inside silently. I will always cherish that special moment in time close to my heart. Donoven will always be remembered as each day passes. I miss his laughter and his grand hugs. I miss his beautiful, handsome face smiling back at me.

We have had the experience of losing a close loved one. It would be interesting to share some ideas about what we have learned so we can help a close friend or family member after the death of a loved one, so the question this week is: What was the most supportive action someone did for you after the death of your loved one? We look forward to your replies.

This week’s song is from Teresa, mother of John, who wrote, “John was always fascinated with flight. He often flew on commercial airlines. We took him to both Johnson and Kennedy Space Centers as a child. While in high school, he wrote in a paper that he planned to be a pilot and wanted his ashes dispersed from a plane when he died. When he was KIA, his instructions were to be cremated and his ashes dispersed as high in the atmosphere as possible." I tried to find the best situation where I thought a plane would fulfill his final wish. Just as I thought I had chosen, I discovered a space burial service called Celestis. At 2:30 a.m., June 25, 2019, a gram of my son's ashes were inside a communication satellite aboard a SpaceX rocket launched from the same pad as Apollo 11 at Kennedy Space Center into Earth Orbit, where it will remain for approximately 25 years! Winston Scott, former space shuttle astronaut, played ‘Fly Me to the Moon’ on trumpet at that night’s banquet.”