Supporting families who have experienced the loss of a loved one can be very important as we all know. This week survivors have written about the meaningful gifts others gave them in their grief. TAPS gives survivors many gifts, and this week the Saturday Morning Message will share one of those gifts from the website.

The picture this week comes from a video of a webinar titled "Building Your Circle of Support After a Loss." When you tour the our stories section, you will find a list of video recordings of past webinars discussing a variety of ways to heal after the loss of a loved one. This is one of the many gifts from TAPS that you might enjoy. I hope you will find the responses from survivors comforting also. 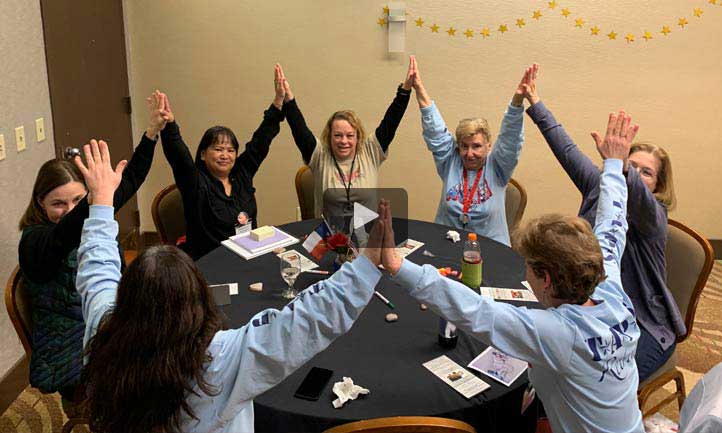 Remember, you can write to me anytime — to contribute, subscribe or if you have thoughts on what could make the Saturday Morning Message more helpful. I look forward to hearing from you.  My email address is online@taps.org.

Responses from Survivors to last week's question: What was the most supportive action someone did for you after the death of your loved one?

From Elizabeth, spouse of Joseph: After my husband Joe died, several family members gathered at our daughter Maria's home. Soon after, my friend Sheila showed up with two large pizzas. When I went home later, I realized she had gone to my house and unloaded the dishwasher. Neither thing was big, but they meant so much. When a friend's husband died three weeks ago, I made a pot of chicken soup and two loaves of bread. Since then, I made and dropped off a lemon bread and an apple pie.

From Janet, mother of Steven: The most supportive person to me after my son’s death was my casualty assistance officer, or CAO. He was so helpful from day one. I had no idea what to do or how to do it. He was there every step of the way. He came from Fort Campbell, which is nearly five hours from me. He never hesitated to make the drive. Even if he just needed something signed. After the first year and just before the final meeting with the Army, I was told he was leaving for Germany. He came down and introduced me to his replacement. I am happy to say that nearly six years later, that CAO and I still keep in contact through email. I am forever thankful for all he did for me and my family.

From Debra, spouse of Thomas: It is really difficult for me to try to single out the one most important thing that someone did for me after Tom died. I am very fortunate that I have two warm and extremely caring friends in Texas who came over to the house immediately after I called them and told them that Tom had died. They would call every day to check on me or just stop over. A week later they told me to go take a shower and get dressed, because they were coming over and picking me up for dinner at their home. They knew that most likely I was still curled up in my recliner crying or in bed hiding under the covers. They also sat down with me one evening and helped brainstorm various options for my moving forward. They also took the time to be there during the sale of my house. I met with a real estate agent and they opened up my house for the minor repairs that needed to be done before closing. When I came back from Florida, to close on my place here, I found most of my home packed up for the movers and a buyer for the truck. They also helped me sell the Texas-size furniture that would never fit in my new place. Angels walk among us, is about all I can say.

From Charlene, mother of Devin: The Marine casualty officers were the ones to refer me to Military OneSource, which connected me with TAPS right after I lost my son. Then TAPS set me up with a therapist through Give an Hour that offers one hour a week free therapy and spiritual healing to families of the fallen. My therapist has been a Godsend. I still continue to see her because she really takes an interest in my overall well-being, cares about finding how she can serve survivors best and follows up on my progress. TAPS has given me a family like I’ve never had with my blood relatives. They offer so many opportunities for growth, healing and survival after our horrible loss.

From Leslie, mother of Stephen: Our neighbor had seen the CAO and chaplain arrive at our house to deliver the news that our son was KIA. The rest of that day was a blur until the next knock on the door at about 8 p.m. It was our neighbor delivering more than enough food for the two of us, and my daughter and her family. He wanted to make sure that we ate something, as he was sure we didn't even think about eating (which was true). This act of kindness in our deepest sorrow meant the world to us. We were blessed that people wanted help and let us know we were not alone.

From Perry, father of Christopher: Back in 2005 when my son Christopher was killed, the casualty affairs process was very different than it is now for a single father. Unlike today where a single father has their own CAO to help them through the funeral and everything involved with that, I had no one. My only link was to call either the casualty affairs office at Fort Knox or Fort Hood and speak to a secretary. Helping me through all of this was a secretary at the Fort Hood casualty affairs office. We had worked together when we both were on active duty, so she knew me personally. If it was not for her, I would have missed Christopher’s funeral. She went out of her way getting me reports and forms so I could receive all the information and benefits I was entitled to receive. Though at the time I was not involved with TAPS, she made sure I was put on their mailing list.

Since we were talking earlier about the TAPS webinar videos, it might be a good topic for next week’s Saturday Morning Message. The question this week is: Have you watched any videos of our TAPS webinars or participated in one?  Which one, and how did it help you? We look forward to your responses.

We can honor our loved ones by communicating with each other through writing. You never know how your words may touch the heart of another. I encourage you to reply to the Saturday Morning Message by emailing online@taps.org. I directly receive all responses that are sent to this address. In order to have your reply included in the week’s Saturday Morning Message, it is best to send it to me by Tuesday morning of the following week. Thank you to everyone responding this week and those who read this message..

Leslie, mother of Eugene, sent a response this week, “The most supportive thing were friends who came late, very late at night to let me cry on their shoulders. Then there was my dear friend who used my son’s saxophone to play TAPS at the unveiling of his stone. I don’t think he ever knew what that meant to me or how it helped.”

Leslie often sends songs for this section. Her latest contribution is "Somos Novios" sung by Andrea Bocelli and Christina Aqgilera.

A survivor once suggested we include a song of the week, which has now become a weekly feature. If you have a song that is special to you or reminds you of your loved one, please send it to me at online@taps.org. along with a sentence or two about what makes this song meaningful to you. One of our contributors, Andy, father of Danny, makes a free playlist available to you on Spotify of the songs that appear in the Saturday Morning Messages along with a few other songs special to him. The playlist is called TAPS (Tragedy Assistance Program for Survivors) Songs of Love and Remembrance.