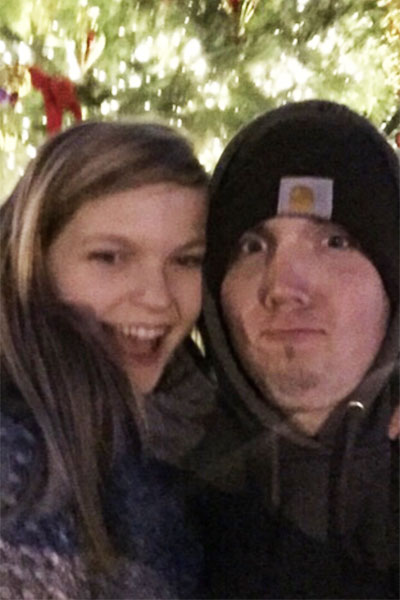 The opening picture today was sent by Samantha, fiancé of Preston. I thought it was a great way to open today’s Saturday Morning Message because they look like they are having a great time. Read more about Preston below. I will keep my comments short, so you will have time to read the many memories that have been shared.

This week there were two questions which came from a staff member at TAPS. Have you ever felt overwhelmed by the number or scope of rituals honoring your loved one? Have you ever felt as though you had to put your own grief aside in order to be a certain way or to conform to others’ expectations of you at an event honoring your loved one? You can answer one or both of these questions. We look forward to your responses.

Would you like to share a question or read how other survivors respond to a topic or question you have? It can be helpful to read and hear how others cope. I encourage you to reply to the Saturday Morning Message by emailing online@taps.org. I directly receive all responses that are sent to this address. In order to have your reply included in the next week’s message, it is best to send your answers to me by Tuesday morning of the following week. Thank you to everyone responding this week and those who read this message.

This week’s song is from Robert and Kitty, parents of John. It is “I Can Only Imagine” sung by Mercy Me. Robert wrote that he feels this song gives us a glimpse of heaven to come.

Responses from Survivors to the question: Describe one thing that will tell us about your loved one. It can be a serious or a funny detail.

From Samantha, fiancé of Preston: If you ask people about Preston, the first thing they’ll tell you is how funny he was. Which I agree. He made me laugh more than anyone. On our first date, he told me he had flowers for me and then handed me a 5-pound bag of flour. But if you ask me about Preston, the first thing I’ll tell you is how loving he was and how he made me feel safe. You know the saying about how home isn’t a place, it’s a person. It’s true. Preston was my home. I never had to be anything in his presence, I could simply exist and he loved me unconditionally for it.

From Kelsey, mother of Michael: My son, Michael, had a real nice beard after his enlistment ended. When his nephew was about 2 and sitting on his lap, he reached up and, rubbing the beard, said, “I like your fur.” That was the day we started calling him Bear.

From Leslie, mother of Eugene: My son was an unusual kid. I played the piano. He played the saxophone. At this particular time I was practicing to prepare for an amateur piano competition in Paris. He had come home for his birthday, graduation from college and Christmas. I didn’t think he was listening to what I was doing. Next thing I know he’s standing behind me telling me that if I would relax, it would sound better. My smarty pants was right.

From James, father of Andrew: If he was interested and if it was important to him, Andy would do things BIG and with intensity. He’d go “all-in!” One of those things was monkeys. Like most young kids, Andy had lots of stuffed animals. But somewhere along the line, he got really hooked on monkeys. I helped him hang up his first loop “vine” in his bedroom; 8 to 10 monkeys hung off of that. Over the years, he hung up more “vines” and his hanging collection grew many times over. He had to work around his dangling monkeys to get in and out of his bed. It gave his room a lot of unique character, just like him. Remembering his monkey menagerie reminds me of his quirky fun-loving attitude, spending time just talking with him in his room and how infectious his intensity with things and with life so often were.

From Debbie, mother of Thomas: My Tom was so witty and funny. Any who met him were charmed by his wit. I knew the deeper side and his trials, but he made so many people happy and feel good. Like anyone here I have my sorrow, but you are a gift bringing good memories.

From Merry, mother of Wesley: When Wes was young and we were sitting in church, I glanced over at him and he was reading Revelation. I was a little concerned and asked him why he was reading that particular chapter. He said he liked to read about the battles.

We were talking about the Tower of Babel at the dinner table one time. Wes was still in elementary school. I was explaining the story of all the languages that came out of that event and no one could understand each other. Wes piped up and said, "Yeah. I guess their lips were moving, but no sound was coming out, huh?" I think he had been enjoying cartoons on TV that were from other countries and was viewing a lot of "dubbing."

From Sandra, mother of Joshua: Josh was my best buddy. I could talk to him. He had my back. My son was always doing things for me, being supportive when I was down, taking me out to eat at a restaurant, calling me and buying me wonderful gifts. He was like this with my husband, his brother and his two girls. When I think about it, he was like this with friends and family: caring and loving. Josh was always on a tight budget like us and I am sure that it was sometimes financially tough for him, but he sacrificed to give to others. This brings tears to my eyes. I miss him every day.

From Beth, former spouse of Thomas: My former spouse, Tom, was one of the most caring people I ever met. He would give anything to help another person. We were best friends and a few days before his death, I told him I wanted a traveling suitcase for my new move so I could take the train back to visit him. He told me to take his, because he knew I borrowed it all the time and liked it. Tom had been a staff sergeant in the Marine Corps Reserves. Tom was so generous he would drive hours to help someone in need and he would give all he had even if he was paying for it on his credit card. I'll never forget all the times he would drive 25 miles to my work if I needed a change of clothes or forgot my lunch at home. I lost Tom on June 29. His last words were a text that said, “Take care I'll miss you.” I was moving to another city.

From Sheryl, mother of Adam: Adam was a Renaissance man. He had very diverse interests and talents. Growing up he was an arts kid who wanted to be an artist, scientist and soldier. In college he earned a bachelor's degree in musical theater. As an adult, he was always taking classes and studying topics from self-sustainability to physical fitness to classic literature. He wrote a post-civilization book which I plan to edit and publish. Adam dreamed of producing podcasts and starting an escape room business. Classmates asked his advice on numerous issues. All the while he wanted to be an excellent son, parent and husband.

From Kim, mother of Ryan: I just started putting my memories of my son in a jar and pull one out everyday to help me. Apparently he was far from shy. When looking at pictures/videos sent to me from his Army buddies, Ryan would get up on the counter at a fast food restaurant and sing and dance on it.