As we learn to function after the death of a loved one, something unexpected may come along to upset us. Last week Cheryl, mother of Jack, wrote about her dog, Bear, who was a comfort pet. When he passed, she wondered how others have coped when another sudden loss occurs in their lives while healing. Sometimes nothing helps more than a big hug. The picture this week come from a TAPS article written by Bevin Landrum titled “Attending Funerals After Loss,” which includes other strategies that have been used by survivors when close family and friends enter the grief journey. I hope this article and the responses below are helpful. 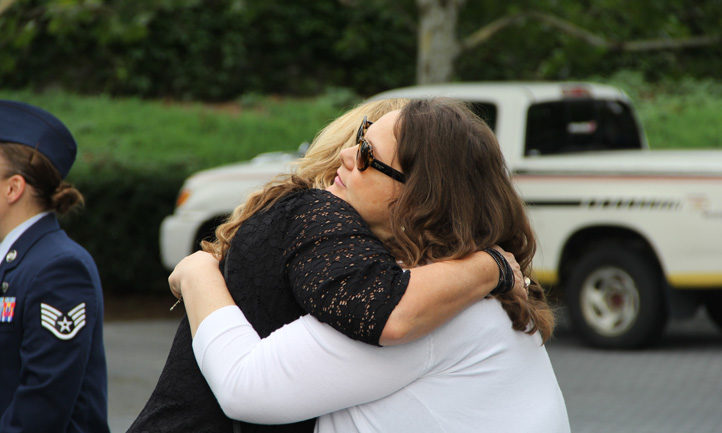 The question this week comes from an article written for TAPS by Judy Tatelbaum titled “Tips for Self-Care.” Self care combines what you do for yourself emotionally, mentally, spiritually and socially while grieving. Let’s share some of what we have found helpful. The question is: What self-care strategies have you found beneficial? We look forward to your thoughts.

This week’s song is from James, father of Andrew, who wrote, “Andy first sent us “Stayin’ Alive” as we waited on the bus at the airport for his final return home. It’s not how you can even fathom having your child return home, as many well know. Our small talk had stopped. After a long minute of sorrow, the silence was broken. From the radio that we hadn’t noticed, the song started. When we heard the words “Stayin’ Alive, Stayin’ Alive,” Andy’s cousin said the right thing – ‘Well, that’s Andy for ya!’ He knew what we needed at that moment and it helped us get through his return. Andy always was a presence; he knew we needed to understand that he still is! Andy continues to send this song to us at times that he realizes are appropriate for us.”

Responses from Survivors to the question: How has a sudden change in your journey impacted the progress you have made with your healing?

From Perry, father of Christopher: This is a very good question. I enlisted in the Marines when I was 18 years old. That same year I deployed to a place where we were told to expect a 75 percent casualty rate within the first 15 minutes. I was faced with my own mortality; it hardened me knowing I could die. As men in the military we are expected to hold our emotions and never show them, as it is a sign of weakness. In 1983 my unit again deployed, this time to Lebanon. I had four friends from boot camp. We had gone off to other commands, but we met back up in Lebanon. The day that changed all of that was October 23, 1983, with the bombing of the Marine barracks. Out of the five of us friends from boot camp, I was the only survivor, and my platoon lost 12 men as well.

For many years I had buried my emotions about that day and suffered from PTSD. After that, October 23 became a day to do something stupid as I looked back on what had happened on that day. I had started to get help for my PTSD many years after it had happened. In 2005 I noted that it was the first October 23 that I hadn't done something bad. Then three days later the Army chaplain came to my door with an Army sergeant first class to tell me that my son, Chris, had been killed in Iraq. On that day it had changed from PTSD to full-on grief for the loss of my son. It was as if I had just accepted what had happened on October 23, and now that wound was re-opened and made even bigger because it hit closer to home. This made October 25 worse. That was my change of direction. It is like taking one step forward, but two steps back. It has been 14 years since then, but only in the past year when I came to TAPS did I discover I am not alone on this journey.

From Robin, mother of Steven: Our son passed in December 2017, just over a year ago. I thought I was doing OK. I thought I had made progress. My father-in-law, who suffered from dementia, died at the beginning of February.  All I could think was how “grief-fatigued” I felt. I found myself back to what felt like square 1 with grief. After talking with my doctor, I found it was grief and anxiety. I’m making it a point to attend TAPS care groups more regularly and our local Spiritual Care Ministries as well. Check with some of the veterinarians and pet shelters in your area. There may be a pet loss group near by. I’m so sorry you lost your Bear. Sending you love and hugs.

From Leslie, mother of Eugene: Healing from the death of my son... I don’t think that will ever happen. Learning to live a new normal or coping with the reality that he is not here is more probable. Life throws curve balls. Life is how strong we are while dealing with these curve balls.