Grief is different for everyone. In the many events that happen after a loved one passes, others may expect you to act a certain way and that can make for personal difficulty in an already stressful time. The opening picture shows two surviving parents, Suzanne and Ed Kristensen being interviewed by a CBS reporter at the 2017 Navy vs. Air Force football game. When people are on camera, they may be showing a brave face. We are honored the Kristensens were willing to share the story of their son, Lt. Cmdr. Erik Kristensen with others. Other survivors have written about the feelings they experienced during those times. I hope you will find a connection in their writing to show you that you are not alone. 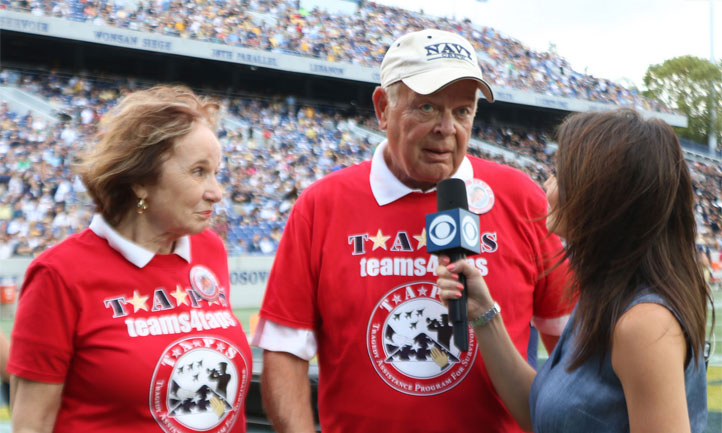 Cheryl, mother of Jack, sent this email which includes the question for this week, “I just wanted to let you know that we found out my dog, Bear, had cancer and he died last Wednesday. I felt like he was such a comfort pet. For some reason I thought I would have him close to 15 years and we had him a little over nine. He was born the day my son was killed. We named him Liber — pronounced like La Bear. It came from the Special Forces motto: de oppresso liber — to free the oppressed, the motto Jack liked. I have been grieving, my husband has been grieving and our other fur friend has been grieving for Bear. Bear was my walking buddy. He was always sitting around me or following me around in the house wherever I went. I am going to have a bit of a hard time I guess, because of all the aspects of that relationship. I would like to ask others how a sudden change in their journey impacts the progress they have made with their healing? Mine is in a tailspin right now, I am a bit surprised that I am applying some of the grief work tools I have with the loss of my pet. I am glad I have them, not glad I have to use them.”

This week’s song is “Even When It Hurts” sung by Hillsong UNITED, sent by Belinda, mother of Benjamin. She wrote, “When Benjamin died, the pain was so very bad. I'd never felt like that before. Even to this day, more than three years later, I ask why. I still knew my Abba Father loved me and loved Benjamin. What I believe and know is I will see Benjamin again. So even when it hurts, I will praise God.

From Merry, mother of Wesley: There is no one in my family who initiates conversation about Wes. When I do initiate, there are caring looks and statements, but not much more than that.  No one ever asks about him. I don't get to linger there.

In the community organizations, I do not talk much about him, but might start something in his honor about reading. He was such an outstanding reader and it is so very important for everyone to be able to read. I could get behind that issue in my community or in elementary schools.

From Robin, wife of Alex: I would have to answer that question with a yes. I'm not a public crier, so feel uncomfortable expressing grief in a public setting. I especially feel hesitant to express grief around my mother-in-law. I once made a comment in front of my mother-in-law about the fact it was the anniversary of my mother's death and that she had been gone a number of years and was told, "You need to get over that and get counseling." Now I refuse to show any grief in front of her, even over the loss of my husband. Because I'm not a public crier, I felt judged at the memorial service we had for my husband. He passed away on February 28, 2017 and it was March 11 before we had the memorial service, so I had time for private grief prior to that. He had also said early in our marriage that if anything happened to him, he wanted his service to be more of a celebration, as that would mean he was in heaven with Jesus. I only had one of our daughters in attendance with me and felt I had to be strong for her. Our younger daughter gets upset any time she sees someone cry, so she will leave the room. We only had the one memorial service and I have no plans of doing any sort of yearly remembrance as I feel that is something he would not have wanted.

From Laura, mother of Aaron: My son, Aaron, has received many of these public remembrances in the almost six years since he lost his life in Afghanistan. Some were local, as well as around the state and also some at Ft. Drum in New York from where he was deployed. As you well know, one of our worst fears as surviving mothers is having our departed son or daughter forgotten. What a great thing to still be getting public recognition for their sacrifice and to celebrate their incredible lives.

A few in my family can't bear to attend these events because for them it brings up such grief. I say, BRING IT ON! It is emotional and heart wrenching, but also makes me incredibly proud. At each one of these remembrance ceremonies, I see different people who knew Aaron and we get to talk about what Aaron meant to them.

I see organizations who work very hard and go out of their way to publicly honor my son. A big thank you to all those thoughtful folks who so generously give their time and money to remember our fallen heroes.

From Cheryl, mother of Daniel: My son, Dan, ended his life. I was informed on a Wednesday evening. I did not go to work the next day, a Thursday, as we made funeral plans. Friday and Saturday were my regular days off. Friday morning I went to gather his belongings where he lived at the home of a friend from his Army Reserves unit. I met my ex-husband and his new wife there for this task. On Saturday, there was a baby shower for my oldest daughter who was pregnant with my first grandchild.

I had to smile through all of it, including pictures. Sunday I worked as usual, because I needed the money to pay for the funeral; and I was allowed three days off total for a family death. Monday was the funeral and Tuesday I was right back at work.

At my job in customer service, I help close accounts for deceased family members. So I have cried with parents over the loss of their child, but I could never reveal what I am going through. My employer also gives a generous military discount, so I am always sincerely thanking customers for their service and asking if they or family members have served.

I never felt I had a choice to get through it any other way.