Sunsets for many of us are comforting. Reading the variety of replies to this week’s question may help us to get ideas about how others deal with funerals after the death of a significant loved one. When we are faced with a funeral, we will have ideas about how to approach it and feel that we are supported. 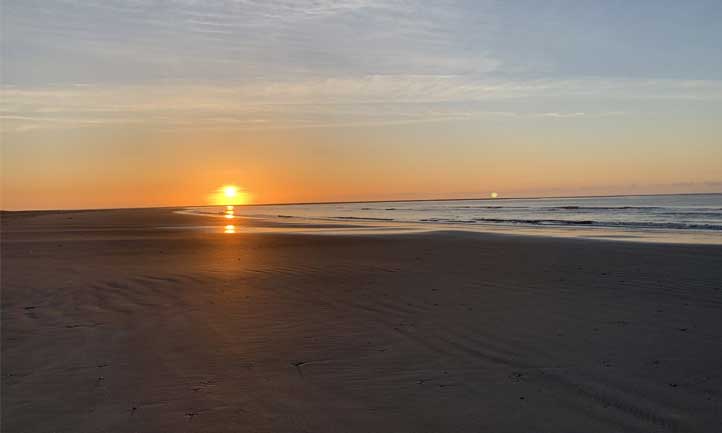 In addition to emailing the Saturday Morning Message, it is also posted on the TAPS Facebook page and lately we have been receiving many comments there on the question of the week. There may be a rush of support immediately after a loss. But as those of us who have lost someone know, it is after the funeral when we may need the most support. So it leads to this week’s question about our gifts or talents. While you read this week’s comments, think about what you might do to help someone who is grieving. Your responses will be posted next week.

Responses from Survivors to last week's question: Have you had difficulty going to a funeral or memorial service since the death of your loved one?

From Merry, mother of Wesley:  I lost my brother four months after Wes died. My best friend's husband died six months later and then a friend from the Daughters of the American Revolution died. I would sit at the back of the sanctuary or on the end of a row so I could escape if I had to. The overwhelming feelings of grief could attack at any time so I was careful in a crowded room. I was also careful as to who I was sitting with, so I could have an understanding shoulder to lean on. There were several good friends who supported my situation. I was fortunate.

From Bonnie, mother of Case: I have been to a visitation since my son passed away. In March, one of my dad's best friends passed away. I honestly didn't give it too much thought. I just knew I had to go and support his daughters whom I have known most of my life. My two sons came with me in support. We walked into the same funeral home my son Case had been in December. It was packed with people to support this Vietnam veteran and retired firefighter’s family. I went into the parlor to find his daughter. As we stood and waited for her to finish talking to a couple, I started shaking and panic set in quickly. I wasn't expecting it, nor was I prepared. I walked up and hugged my friend. She held on and we cried. I told her I was sorry, but I couldn't stay. I have not been to any other funerals since. I will certainly be more prepared next time, but I will continue to go to support family and friends even if it's hard for me.

From Bob and Kitty, parents of John: Since attending our son's memorial, the hardest event we’ve experienced, other memorials and the grief associated with them are easier to relate to. The most difficult services are those of people without hope and young children or a child. TAPS has given us the tools that we need to attend other funerals, memorials and services for the celebration of life.

From Laura, mother of Aaron: My father, a World War II veteran, died two weeks ago. Of course, his death at age 95 has impacted me in a different way than losing my son who was 32. But all the decisions that go into the planning of the funeral have brought back those feelings from when Aaron was laid to rest. So when the flag was folded and presented to my mother and TAPS was played, the memories of when I was in that same circumstance came flooding back. I had to turn away and could scarcely catch my breath!

From Charlene, mother of Devin: Less than a year after losing Devin, my nephew Andrew overdosed and died. Devin and Andrew grew up together and were a lot alike. On the day of his funeral I felt like I was having a heart attack for Andrew and an asphyxiation for Devin. Looking at another beautiful soul ripped away from those who love them was in some way like being disintegrated after a nuclear bomb blast. My soul was so raw and shattered from losing my only son, now I had to say goodbye to my sister’s only son. They are the two nightmares that I can never wake up from. They’ll always be our little men.

From Perry, father of Christopher: For several years after my son’s death, I would stay at home doing nothing for Memorial Day. In the past I would go to events where I was stationed to honor the Marines I served with who had died. The Texas Veterans Commission built a memorial at the National Cemetery in Killeen, Texas. I was there to honor my son Christopher when it was dedicated and they placed a picture of my son on that memorial. The following year I started to volunteer at the National Museum of the Pacific War. Part of our Memorial Day program was to have a rifle detail give a 21-gun salute. I would participate in that until a year ago. Last year we had one too many for the rifle detail, so I stepped out to observe. The morning of the Memorial Day event the program director came to me as she knew I was a Gold Star father. She said they had no one to lay the wreath for all the fallen and asked if I would do the honors. This year I did the same thing except this time I did it as a TAPS representative.

This might be the time to think about what we can do to help others in a way that  will also honor our loved one. This week’s question comes from Bonnie, mother of Andrew.  She writes, “We all have gifts, but sometimes we have not used them often, because of our own grief and sorrow.” Let’s think about what we are doing now or might want to try to do to help others in their grief. Her question is: What are your gifts and how can you share them to ease someone’s pain?

This week’s song is from Beth, former spouse of Thomas: Thomas had "Shut Up and Dance with Me" by Walk the Moon as the ring tone on his cell phone. I did some research on the song and found it's about letting go of frustration and having fun. Tom struggled with depression and I think the song helped him to relax and think of happy times. Whenever I hear the song in an exercise class, I think of happier times we had during out 18 years together.