The replies sent in response to the question about summer memories this week were wonderful. When I read them, I got a picture in my mind of the places described. One survivor, Debby RM, spouse of Tom, sent a picture of Lake Tahoe to go along with one of her memories. I thought it would make a good opening for this week’s message.

Debby wrote, “Lake Tahoe is where Tom and I were married on July 19. This photo is the view we had, when we said “I do.” I was five minutes late getting to our wedding, because I had gone down the hill from our timeshare to have my hair and makeup done and to get dressed at a hotel. In the elevator coming down from my sister’s room, we shared the elevator with the actor Dennis Quaid who was playing in the celebrity golf tournament that same weekend at Lake Tahoe. Dennis Quaid actually helped me get into my sister’s car and wished me the best. When I arrived at our wedding site, Tom asked me why I was late for our wedding, because he was worried about me. Our long-standing private joke originated from that. It was that I was “trying to choose between marrying Tom or Dennis Quaid...and Dennis lost. Lake Tahoe will always be my “happy place” and its magic holds the most incredible memories of joy, happiness and true love that never will die.” 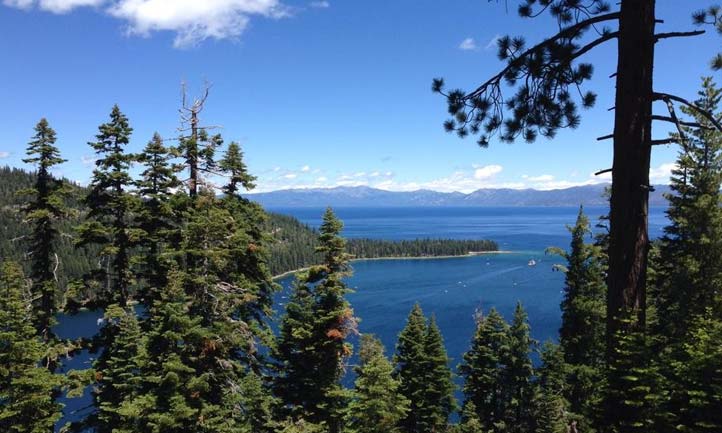 Responses from Survivors to last week's question: What is your favorite summer memory or vacation with your loved one?

From Charlene, mother of Devin: The first summer memory that came to mind with Devin was tubing on the Schuylkill River in Philadelphia. He absolutely loved doing it and was so fearless that every time he was thrown off the tube, flying high up into the air and hitting the water like a ton of bricks, he got right back up and wanted to do it over and over again, even asking the driver of the boat to go faster and turn around in circles. From inside the boat I had my heart in my throat. I couldn’t watch most times, but also could not stop him from having the time of his life. The heart of a lion and refusing to be conquered. That’s my little man.

From Mary, spouse of Christopher: Our neighborhood has a summer swim team and when we moved here in 2002 our family jumped on board with the team. It was a great way for our five children to be active and involved. Year to year the kids would swim every summer, mastering the strokes, having fun with friends, making new friends and competing against other friends from other neighborhood teams. Chris and I have swimming backgrounds, so we enjoyed helping out, because we were at most all of the practices/meets to watch and help out with whatever needed to be done. When Chris deployed we had a party at our pool with a small group of close friends. It was in July so some were still wearing patriotic colors for Chris. When Chris passed away the team created a Chris Kalafut award. It is in memory of Chris for all of his selfless time given each year to the team. When the award is given at the banquet each summer, it is very trying, yet awesome to see who the winner will be. The coaches presenting the award have grown up on the team and so they know Chris and share special memories. We always have summer time fun at our pool and still do today, minus one.

From Merry, mother of Wesley: One trip was a road trip to the Silver Jack Reservoir in South/Central Colorado. Wes and his brother Eric had a tent of their own and we could hear them talking, laughing and giggling before they went to sleep. I would love to know what the two of them were talking about. At one campsite, we had several cows walking through and munching grass. We were in ranch land and actually at one point had to stop for a half hour while ranchers were trying to get cows across the road. Boy! Did those men ever look worn out!

From Debbie M, spouse of Thomas: As a family of five with one income, my fonder memories were making dinner and the family going to the park and having a picnic. There was a pond there. The kids and my hubby could fish. We had a family night that was special.

From Perry, father of Christopher:  My last summer vacation I had before my son Christopher enlisted was such a fun time. This was back in the summer of 2002 my unit had given us what was called block leave. My unit had just returned from a deployment, so we were all looking forward to a vacation of sorts. This was a two-week period when the whole unit could get away from the base and military activities. I went home to Indiana to spend the time with my parents, because my unit had another deployment coming up after we returned. Before I arrived I set up the time for all three of my sons to come visit before I left. I had brought with me a couple of super soaker water guns. The afternoon when my sons came to visit, my mother told them I was in the backyard. Well, I was in the backyard, but I had set up a little ambush so that when they came around the corner I got the first shot in. It was not long after that we were all a bunch of drowned rats soaked from head to toe. Everyone had fun that day as we had a barbecue later. The next summer Christopher was off at his basic training, so this was the last time we were all together as a family.

From Cait, spouse of Robb: This question is so easy. My favorite summer vacation EVER was the time we went to Lake Billy Chinook to go camping and boating. This was the best trip, because it was just the four of us. No extra kids or family to interrupt our time together. Previous trips were always with others, but this trip was so special because it was just us. We would start our morning with a quick breakfast, then off we would go to the lake and get the boat out on the water. Off we went to find a spot where we could hold up for a few hours, swim a little and hang out on the boat. This trip it was super hot (over 100) everyday, so we would put on our life jackets and jump in the water. Robb would tie a rope to the boat so we could hang on and not drift away with the current. It was so relaxing and we all had a good time, even when our daughter cut her finger and her daddy put a Band-Aid on her booboo.

From Beth, former spouse of Thomas: Thomas was an avid scuba diver. Our summers were spent in Cozumel, Mexico and the Cayman Islands. I was not a diver, but I enjoyed sightseeing and learning about new places. Our last vacation together as a couple was Joshua Tree National park. I was undecided about accepting a job in that area. We both really felt peace and tranquility down in the desert during that time and saw many beautiful sites.

From Katherine and Robert, parents of John: Since we are both in education, our favorite summer memory was our vacation in Hawaii during our son's second tour in Hawaii. We had visited both sides of the Big Island and enjoyed the turtles at the Black Sand Beach, the Lava Tube, walking on the hardened lava flow and a visit to the Volcano House. It was here that someone behind us yelled "Is that you Bob?" He turned around and sure enough it was a retired teacher from his school. John exclaimed, "Do you know someone everywhere we go?" This had happened several times previously while in Hawaii.

From Rebecca, mother of Griffin: My favorite summer memories of my Griff and myself were going to Ocean City and Assateague, Maryland each summer. One summer Griff went parasailing. He had a blast! We also would go to the Air Force air shows. We also went to the Costello Park swimming pool. Griff loved the pool in our community, along with the socializing. When Griff was younger (up until 12) Manassas Park would have a July 4th bike decorating contest. Griff won four years in a row. They also had a lot of other activities for kids. Griff had fun with all of his other friends. Griff really enjoyed and looked forward to fireworks each July 4th. I loved watching my Griff have so much joy in what he was doing!

Next week I will be visiting my family in the northern part of New York state. I am going to use a message from the archives and keep the same question for the next week, so you will have a chance to respond. The question is: Do you have a personal object that really speaks to your heart? Is there something you carry with you that is meaningful and helps when times are rough? I look forward to your replies.

This week’s song is from Robyn, mother of Cole who sent "Waiting on the Far Side Banks of Jordan" performed by the Carter Family. Robyn wrote, “This old song by the Carter Family feels like a message of hope to me from my son every time I hear it. Although the first time I heard the song after his death it nearly split me in two.”