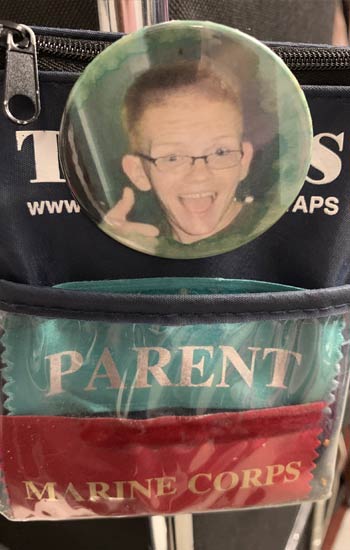 The picture comes from Charlene, mother of Devin. I thought you would enjoy reading why the picture shows this young child’s gleeful facial expression. Here is Charlene’s explanation, “I got this at my very first TAPS seminar 2016. This picture defines my son’s humor. He’s holding a huge bullfrog in the other hand and the reason for his facial expression is it peed on his shirt. To him though it’s thumbs up and all good. I had a serious fear of flying before he passed. Now I bring him with me every time I travel. I feel safe and don’t fear anything anymore. Also I represent being a proud Marine mom.”

Responses from Survivors to last week's question: Do you have a personal object that really speaks to your heart? 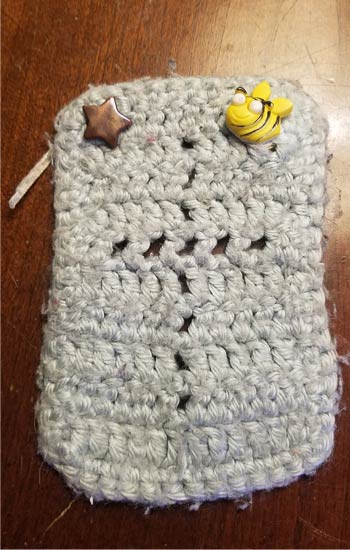 From Bruce, father of Brian: When Brian died we were overwhelmed with cards from military families across the country. One card contained one blue and one pink crocheted prayer napkin. I carried mine for over a year everyday. Lately, I only carry it around the 12th of the month and other days that I feel overwhelmed. I reached out to the lady who is an Army mother and told her how important her gift was for me. I hope she truly knows. I have surrounded myself with so many objects that he owned or remind me of him, but that baby blue prayer napkin is my crutch.

From Rebecca, mother of Griffin: I carry Griff’s 1st 464th Transportation Company coin with me always. Also carry the 464th Transportation Company coin that the Base Commander gave me the day after Griff joined Heaven's Military. The base commander, along with his sergeants, also came to the house. The 464th were truly family to each other. The coins are given with respect and heart.

From Barbara, spouse of Lawrence: I have a locket that has ashes of my husband in it.  I wear it around my neck so I have him with me at all times. Very comforting.

From Perry, father of Christopher: There is something I have with me always on my keychain that keeps me motivated and is a memorial to a great man I served under. Many years ago my military mentor gave me a link of chain when I was a young Marine NCO. Telling me the story that a chain is only as strong as its weakest link. The point is to know where you are weak and you are strong. That you have got this no matter the problem life hands you. Sadly, it was only a few months after this that my mentor found out he had stage 4 cancer. Within a month of finding out about the cancer he passed away. It is my most treasured thing from my 24 years of service in the Marine Corps.

From Kelsey, mother of Michael: I have my son’s uniform. Since his passing in 2016, it has hung in the closet. My dad made the frame for it. It is special to me, because he wore it while in service.

From Hope, spouse of Dennis: I carry Dennis in my heart, so he is with me at all times. I carry a lock of Dennis’ hair in my wallet. I can take it out and brush it against my cheek like brushing my lips over his head in the past anytime I want to or just leave it there and know it exists. I carry his pocket knife instead of my own, so every time I need a knife to cut a flower or to open a box, I have his knife. I carry his cell phone all the time. I only use it to call myself if I can’t find my own, but I like knowing it was his and I can see where he accidentally opened the flip phone and took a picture of himself. I have put that as the picture on the screen of his phone. I carry the love we had for 49 years and it breaks my heart he is gone. Suicide is a tragic ending to the life of such a kind and loving man who was a diamond in the rough. I pray he found the peace he never had since Vietnam.

From Robin, mother of Steven: When my son came back from Afghanistan in 2011, he cut the shoelace holding his dog tags from around his neck. He was about to throw it in the trash when I asked for it. He gave it to me. I made a bracelet out of it. After he passed I added a charm with his picture.

From Sheryl, mother of Adam: Shortly after Adam died, I received a dragonfly keychain from a charity in Minnesota. It was accompanied by a story of dragonfly larva transforming into a beautiful creature. I took the dragonfly as a symbol for Adam.

I purchased a Black Hills gold dragonfly necklace which I wore often. Last month I wore it on a long-planned cruise to Alaska. Adam's family and I had talked about this being a family trip. Now I was going with a friend instead, but I took my "Adam" necklace to represent his spirit. Unfortunately, I lost my dragonfly necklace. The cruise line cannot find it. The necklace was a link, but I miss it.

From Robyn, mother of Cole: My son's fatigues hang in the closet of the room still occupied by my 20-year-old and 17-year-old sons. It was the set that had been in his locker after his accident and they are pretty worn, so we know he'd been actively using these. There is a set of his dog tags in the front pocket. I find it hangs at just about the right height for me to steal a hug every once in a while when I am my missing 6-foot angel. They still smell like him.

I always learn something from the thoughts of others, so this week let’s share ideas that help us when we are feeling really down. The question this week is: What do you do to uplift your spirits when you find yourself feeling gloomy? We look forward to your thoughts.

This week’s song is from Cait, spouse of Robb, who wrote, “Robb and I saw this movie way back when. He liked the song so much he would sing parts of it to me. I used to cry when I would hear it, but not any longer. Now it brings back so many good memories. “Cross My Heart” sung by George Strait is one of my all time favorite songs.”