Ornaments are special. Some of them are from places we have visited, come from special friends or family, or they can be just something we bought because it touched our hearts. TAPS has touched many hearts, so the opening picture is an ornament you can buy at the TAPS store.

This week survivors wrote about creating an ornament that introduces their loved ones to those who read this message. The responses came not only from those who wrote to my TAPS email, but also from the question of the week posted on the TAPS Facebook page where you can read many more. I know you will enjoy reading about the ornaments suggested by survivors. 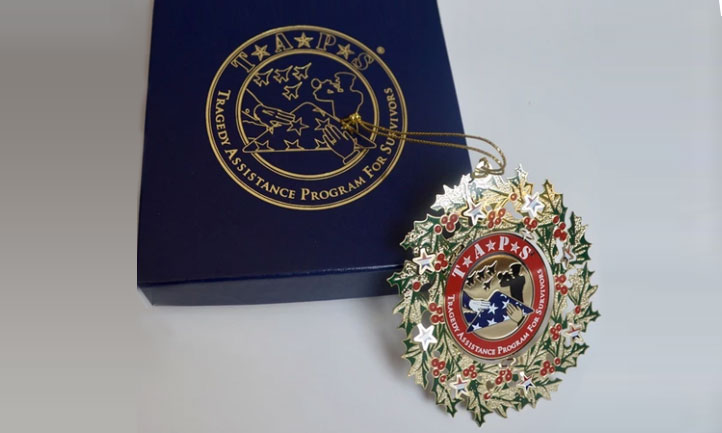 Responses from Survivors to last week's question: If you were going to create an ornament showing something important about your loved one, what would it be? 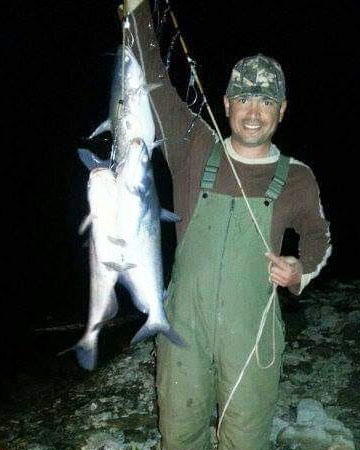 Rosemary, mother of Darrell, sent this picture with her comment, “I would use this photo. Fishing was Darrell's happy place.”

From Teresa, spouse of Justin: A Woody Woodpecker ornament. He had a tattoo on his leg of Woody. Also he had red hair and his nickname was Woody.

From Robin, spouse of Alex: If I were going to do an ornament in memory of Alex for the tree, it would have to be golf-related. He loved to play golf and was so competitive, especially when playing with his younger brother. In fact, at his memorial service, there were two people who spoke and one who couldn't attend, but sent something for the pastor to read. All of them brought up golf and how competitive Alex was. We golfed on a church league the first summer after we were married. I've kept his clubs as I might like to take it up again. I may dig in the case for a golf ball to hang on the tree.

From Anna, fiancé of Benjamin: An ornament with a photo of our family or an American flag ornament, because he was the most patriotic man I’ve ever known.

From Leslie, mother of Eugene: I think if there would be a creative ornament to reflect my son, there would be a glass, four-sided room with a desk on a blue floor, comfy red chair, three computers and a minimum of six computer screens. There would be a happy man at the desk coordinating it all.

From Betty, mother of John: Johnny loved eating tamales at Christmas time and he helped make them.

From James, father of Andrew: Andy saw the details in most things, so it would need to be detailed. He made a fashion statement; not overbearing, but noticeable. A bright green Teenage Mutant Ninja Turtle wearing a “Real Turtles Wear Pink” t-shirt would remind us of this unique person who stood by his principles and supported those who needed it. Many, many monkeys – Andy had loads of them. Orange checks and purple stripes of course. One in a Karate GI uniform, one with a Coastie cap, and one with a pirate hat and eye patch. And it would be BIG – Andy always was a BIG presence, just by being himself.

This week’s question came from Lalaine, daughter of Francisco. Lalaine wrote, “In this age of digital messaging and social media posting, taking out pen and paper to write a letter or card to someone we're thinking of is becoming an uncommon practice. We always delight in receiving a handwritten note, but rarely take the time to write one ourselves. What words of comfort would you like to receive from someone who might not know what you need?” Write the words you’d like to hear.

Would you like to share a question or read how other survivors respond to a topic or question you have? I would love to gather some thoughts for future Saturday Morning Messages. It can be helpful to read and hear how others cope. I encourage you to reply to the Saturday Morning Message by emailing online@taps.org. I directly receive all responses that are sent to this address. In order to have your reply included in next week’s message, it is best to send your answers to me by Tuesday morning of the following week. Thank you to everyone responding this week and those who read this message.

Do you have a favorite song you’d like to share and tell us about? Maybe there’s a certain Christmas carol that brings a happy memory? A survivor once suggested we include a song in this newsletter, which has now become a weekly feature. If you have a song that is special to you or reminds you of your loved one, please send it to me at online@taps.org. along with a sentence or two about what makes this song meaningful to you. One of our contributors, Andy, father of Danny, makes a free playlist available to you on Spotify of the songs that appear in the Saturday Morning Messages along with a few other songs special to him. The playlist is called TAPS (Tragedy Assistance Program for Survivors) Songs of Love and Remembrance.