This year, Elmo, Big Bird and the rest of Sesame Street are celebrating 50 years of bringing quality educational programming to households everywhere. Since the show first aired in 1969, its mission is to help kids—including military surviving kids—everywhere grow smarter, stronger and kinder. 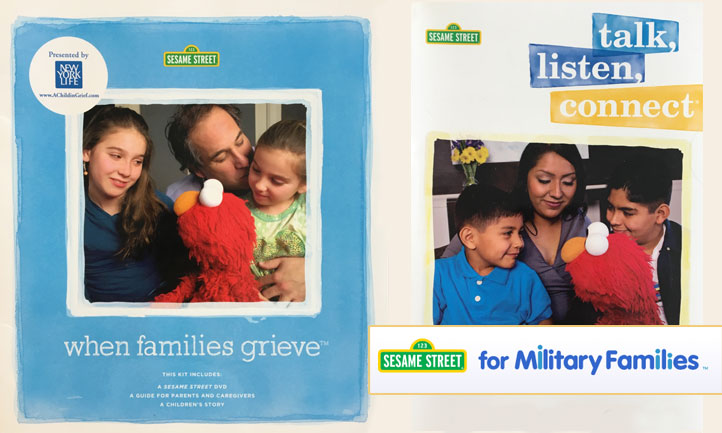 Sesame Workshop, the nonprofit organization that produces Sesame Street, recognized the need for resources to support military families and their unique circumstances. It launched an initiative to provide military families with tools to help young children cope with the challenges of deployment. Later, after an overwhelming response from the community for additional resources, Sesame Workshop collaborated with TAPS to produce “Talk, Listen, Connect: When Families Grieve.”

The video features Elmo, who helps console his cousin whose father recently died. It also features real military survivors and their children discussing what it’s like to lose someone who served in the military, their feelings around the loss, how they remember their fallen hero and how they express their emotions about their grief experience.

Kim Ruocco, TAPS Vice President for Suicide Postvention and Prevention is featured in the video, along with her children, who share how TAPS Good Grief Camp taught them how to process their feelings around the loss of their father.

“I think the best way to cope with feelings is to just talk to somebody and just say everything that you’re feeling and why you’re feeling that,” said Joey Ruocco. “It’s like a towel. If it’s wet, it’s going to weigh you down. You need to wring it out.”

Joey went on to share what he liked about TAPS Good Grief Camp. “You get a mentor, which is a father figure usually, and they’re Marines,” he said. “Sometimes when you lose your military member of your family, you kind of lose your connection with that military family that you had before and I think TAPS really reconnects it back.”

Sesame Street for Military Families is a free, bilingual (English and Spanish) website where families can find information and multimedia resources on the topics of grief, self-expression, and more. There are art projects, games for young children and resources to explore. There is also a TV special hosted by journalist Katie Couric that features Kim Ruocco’s story, and that of other parents who lost a spouse. The contents and topics presented in the show are geared toward adults and how they raise their children after the loss of their spouse and co-parent.